Yesterday morning before the game, I posed the question of how the Pittsburgh Steelers would contend with the Washington Redskins’ talented young tight end, Jordan Reed, who caught 87 passes for 952 yards and 11 touchdowns last season in 14 games and eight starts.

The covering of tight ends was a bit of an issue for the defense last season, as I detailed, but the Steelers did what I would say was a fair job covering Reed, who finished the game last night with seven receptions for 64 yards, which is roughly what he averaged on a per-game basis last season.

The Steelers were particularly effective in doing so when they were able to get Ryan Shazier on him, as it produced not only an interception early in the second half, but also a key pass deflection in the end zone on a beautiful bit of coverage that details the strides that the third-year player has made in that aspect of his game.

Steelers head coach Mike Tomlin certainly agreed on that front, describing Shazier’s work in coverage on Reed as “central” in their efforts to control the former third-round draft pick. That became especially evident as the game wore on, as much of the tight end’s production came early in the affair.

Reed was the recipient of the first play of the game, a 12-yard reception that was in part produced by a missed tackle. Lawrence Timmons was able to prevent a reception on him a couple of plays later, but he failed to wrap him up after a reception on the next play that went for 14 yards. He caught a 13-yard pass on a third-and-14 play to end the drive, finishing the opening series catching three of four targets for 39 yards.

The next time he was targeted was near the end of the Redskins’ second drive, with Kirk Cousins targeting him coming across the back end of the end zone, with Shazier in front of him, and the linebacker able to get his hand on the ball to bat it down and prevent what would otherwise have been a touchdown. Washington settled for a field goal.

Reed’s fourth reception of the game was midway through the second quarter, and went for just four yards on an underneath throw on third and 10, with Timmons the primary defender in the zone coverage look. His first target of the second half was a deep pass down the left side of the field that Shazier got under to pick off. 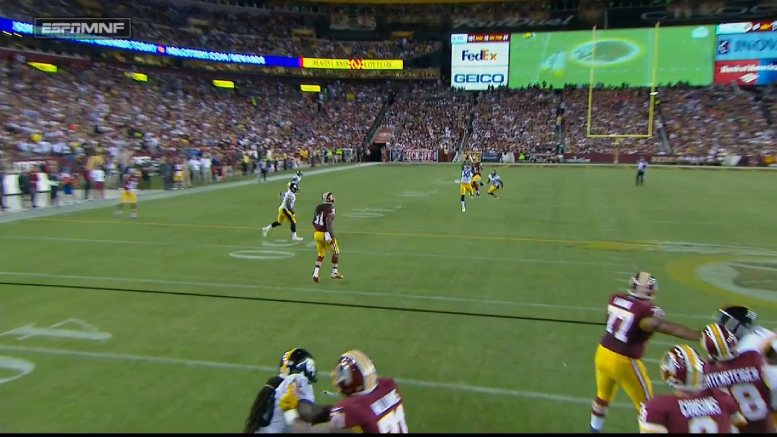 Reed finished out the game with three more receptions on four targets for five, five, and 11 yards, respectively, with the final reception coming under the two-minute warning while Washington was already trailing by 22 points.

Although there were a couple of missteps with missed tackles in defending Reed to start the game, the Steelers ultimately were able to contain him within the confines of the game. And as Tomlin told in his press conference, Shazier was integral to that effort.