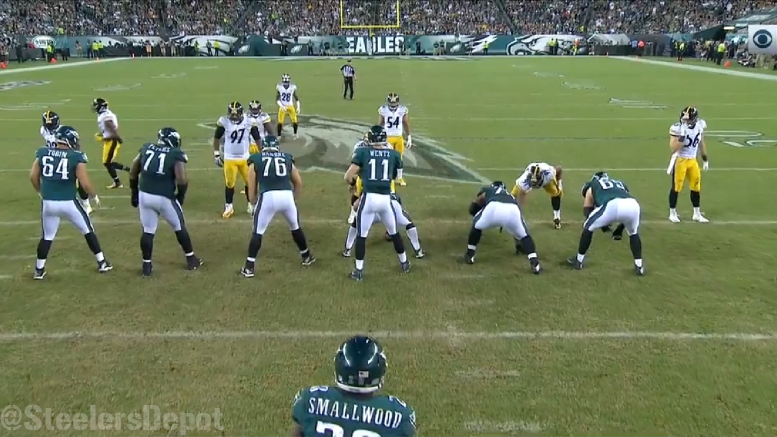 This is in no way to absolve the Pittsburgh Steelers of their performance on Sunday, but I wanted to take a moment to provide a recap of what sort of hand the team was playing with from a health perspective by the end of the team’s blowout loss to the Eagles, considering the number of backups who were in the game.

Of course, the Steelers have already been playing with at least four players that by projection were going to being the year as starters for the team, and that is excluding the ‘starting’ fullback in Roosevelt Nix, who has missed the first three games, as well as the contributions of Martavis Bryant, who no doubt would have started at least the first two games had he not been suspended.

It starts, of course, with the running back position, as the Steelers obviously played the first three games without Le’Veon Bell. Admittedly, DeAngelo Williams filled in more than admirably, but I believe that we saw some of the differences between Bell and Williams based on the latter’s production on Sunday, as I believe Bell would have been able to get more done.

At the tight end position, the $20-million-dollar man Ladarius Green is still on the shelf for at least three more games, and the team has had to force Jesse James into a starting role in which he plays every snap, a role he is clearly not prepared for when taking into consideration the maturation of his all-around game.

Then we have the absences of outside linebacker Bud Dupree and cornerback Senquez Golson, who was going to be the team’s slot cornerback before injuring his foot. The Steelers have one sack and rookie Sean Davis has struggled with his tackling, nor can he match Golson’s short-area agility, but either way, they are clearly hurting for depth.

In the process of the game against the Eagles, the Steelers also lost their starting slot receiver in Eli Rogers, their starting left guard in Ramon Foster, their starting strong safety in Robert Golden, and both starting inside linebackers Lawrence Timmons and Ryan Shazier.

When you take all of that into considering, we find that the team was fielding a starting 22 on offense and defense that consisted only of 13 of the players that they had intended, at best, with that 13th starter, the second wide receiver, also being a dubious area to boot.

Clearly, the Steelers find themselves undermanned when it comes to the makeup of their starting lineup that they envisioned over the course of the offseason. But, of course, every season involves injuries, and part of the process is overcoming them and having adequate replacements for them that will contribute to winning games.

This is, once again, not offering an excuse either for the loss or the extent of the lack of execution in the performance against the Eagles. Rather, it’s an updated inventory of their list of storefront damaged goods, goods that they hope to get back at some point.