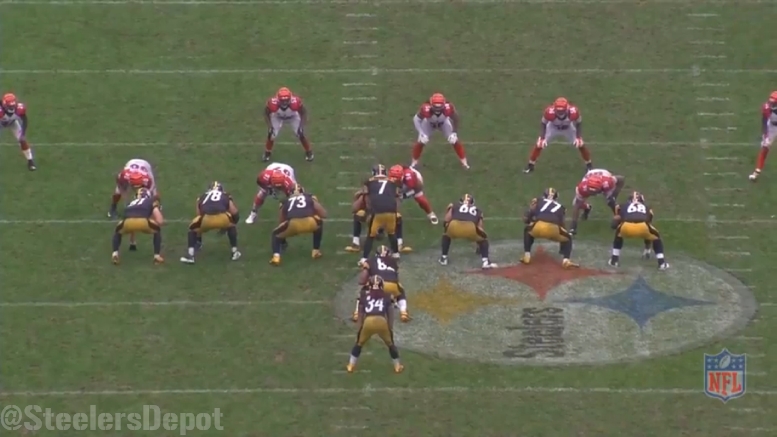 You may recall that last week after the victory over Washington, I wondered why the Pittsburgh Steelers had chosen to use an inexperienced third tight end over a tackle-eligible option, which seemed to be their preferred method of getting an extra blocker on the field over the course of the past three seasons.

Xavier Grimble was used on 16 of 68 offensive snaps in the opener, while only the five starting offensive linemen saw any snaps on offense, in spite of the fact that they dressed all eight linemen who were healthy, though two of them did contribute on special teams.

I wondered at the time if they might have abandoned the idea of using an extra lineman because they felt that confident in their tight end group, which seemed unlikely to me given the relative inexperience and unremarkable qualities of the three-man group that they brought with them into the season.

But the Steelers, nursing an eight-point lead, did actually break out the tackle-eligible look at the end of their victory on Sunday afternoon against the Bengals, with backup swing tackle and 2016 free agent signing Ryan Harris serving in that role as the extra lineman as a tight end. Grimble did not play on those snaps.

What is also notable about these final three plays is that they featured for the first time this season the only usage of the recently re-signed David Johnson resuming a role that he once possessed, as a fullback, a job that he held in 2009 and 2010 before being used more as an in-line blocker in 2011, and then losing out on the job due to a torn ACL in 2012.

When Johnson returned in 2013, the fullback job had been given to Will Johnson, and David instead kicked back to tight end. He served in a dual capacity during his two seasons in San Diego, and was brought back to Pittsburgh this year in part due to the fact that he could spell Roosevelt Nix at fullback if need be.

There has been a need, however, because the second-year player has missed a great deal of time due to a back injury. He was a limited participant in the Steelers’ first preseason game, but has remained out since then, including the team’s first two regular season games. They only utilized a lead blocker out of the backfield on three snaps before two of the final three of the game against the Bengals.

While the manner and context in which they employed both of these options—Harris as a tackle-eligible tight end and Johnson as a fullback—were highly selective, in an end-of-game scenario in which the objective was to run out the clock as much as possible, at the very least, it is proof positive that they are on the table to be used in the future. Not that that is a surprise, but at least we have seen it now.