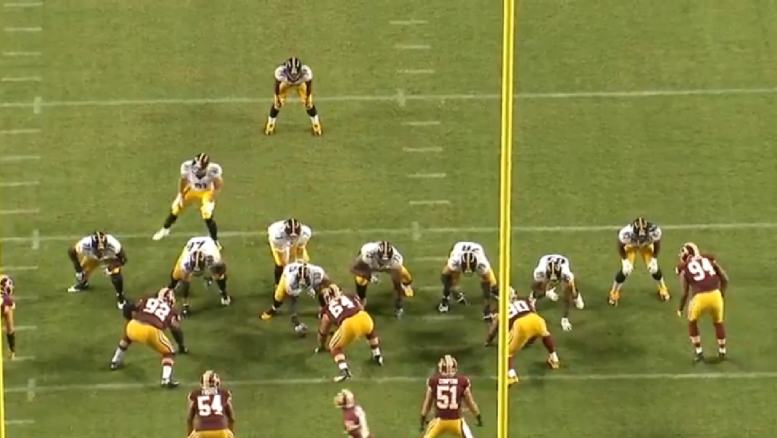 Considering the fact that they ran all but one play in the first quarter of their victory over Washington on Monday night out of their usual 11 personnel, the Pittsburgh Steelers actually ended up playing a respectable number of snaps out of multiple-tight-end sets before the night was through.

That, of course, does come with the obvious caveat that in the fourth quarter they spent much of their time hoping to run down the clock while nursing, at various times, a one-, two-, or three-possession lead. But add in the fact that much of that came not just from the 12, but also the 13 personnel grouping, and we get back to having an interesting discussion.

To provide some context, going back to last season—including the playoffs—the Steelers only ran about 90 snaps, excluding kneel downs, which I am also excluding in this opening game. But of the team’s 67 non-kneel-down snaps, 21 were run with multiple tight ends on the field, and of those 21, 10 included all three tight ends.

Starting tight end Jesse James saw every single one of the Steelers’ 68 snaps, while Xavier Grimble saw 16, and David Johnson 17, including the kneel down. They worked together on 11 of those snaps with the final play, and the remaining 11 represent the snaps in which either one served as the number two tight end to James.

Unsurprisingly, 15 of those 21 snaps were running plays, and on those 15 plays, the Steelers gained 87 yards, averaging 5.8 yards per play. Only five of these carries gained less than four yards, two of which came in short-yardage situations that were successfully converted.

It might be interesting to note that when the Steelers did use three tight ends on the field, they did so exclusively with James to one side of the formation and Grimble and Johnson working on the other side of the formation, though James often lined up with the other tight ends before motioning to the other side prior to the snap. An example of this was DeAngelo Williams’ second touchdown run, on which all three tight ends lined up on the left side initially, and James threw the key block as the tight end from the back side pulling to the left.

Another thing that I want to note, which I noted in a previous article as well, but should be included here, is that when Grimble was on the field, the Steelers utilized him almost always as their primarily in-line blocking tight end, with the exception of only one of his 15 non-kneel snaps.

Even in the 12 personnel working with James, it was James who lined up off-set, and on one occasion even tucked behind the line between the right tackle and Grimble. This seems to be a clear indication that the Steelers like Grimble’s frame and, at least, his potential to develop into an in-line blocker.

It will be interesting to see how this dynamic changes when fullback Roosevelt Nix returns from a back injury that he has apparently dealt with through most of the preseason. The Steelers did not use Johnson at all as a true fullback during the opener, and I doubt that they are abandoning the idea of such a lead blocker from the backfield.