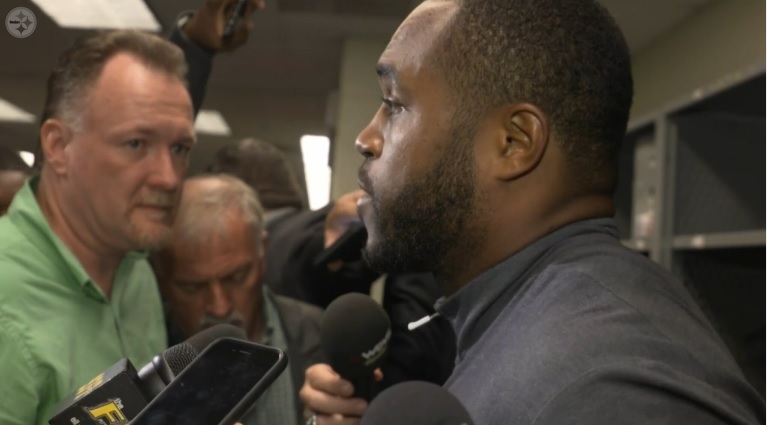 As tough, frustrating, ugly, insert adjective here as the Pittsburgh Steelers 34-3 loss to the Philadelphia Eagles loss, this is still a 2-1 team with as good a shot as anyone to win the AFC North. And the only way to get the sour taste of yesterday out of their mouth is with a win this upcoming Sunday against the Kansas City Chiefs.

That seemed to be the theme across the locker room.

“We’re not going to be defined by this,” Cam Heyward told reporters after the game via Steelers.com. “We’ll come ready to work Wednesday but we’re going to look at this tomorrow and see what we can correct.

“I’m going to say it for a fourth time, it was a bitter pill for us to swallow but we have a big game next week and we look forward to displaying the corrections we’re going to make.”

Those corrections will be a lengthy and really, all-encompassing list. The Steelers lost in basically every phase against the Eagles, held to just three points on offense in the largest loss ever under Mike Tomlin.

Denial over their problems didn’t exist after yesterday and if anything, players admitted the Eagles have created a blueprint for teams to mass produce. It’s a copycat league after all and when one of the thought-to-be best teams in the league gets pummeled, everyone else takes notice.

“We gotta learn from this because in this league, teams are going to continue to do it.”

The Steelers will face a Chiefs’ team run by Andy Reid, the man who taught the Eagles head coach – Doug Pederson – as a player in 1999 and as a coach from 2009 to 2015. The ability to correct and adapt will be immediately tested.

Players are still adamant it was less about being unprepared and more about plain poor execution.

“Whether it was them dumping the ball off to the running back and us not tackling, that is all stuff we can correct,” Heyward said. “It wasn’t anything we hadn’t seen before.But they definitely should be commended for what they did today.”

The Steelers will host the Chiefs on Sunday night on NBC.