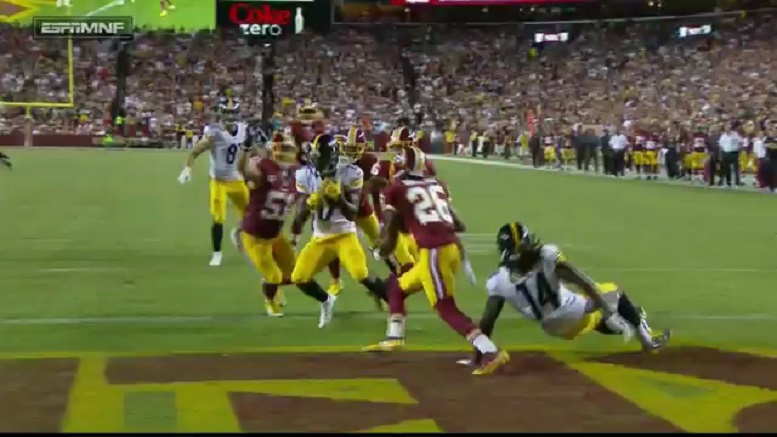 Pittsburgh Steelers second-year wide receiver Eli Rogers had quite an NFL regular season debut in the team’s Monday night win over the Washington Redskins as the former undrafted free agent out of Louisville registered 6 catches for 59 yards in the contest in addition to his first career touchdown.

Rogers will likely never forget his first touchdown reception as long as he lives and he can forever thank fellow Steelers wide receiver Sammie Coates and Redskins cornerback Bashaud Breeland for making it happen.

With 27 seconds remaining in the first half, Steelers quarterback Ben Roethlisberger attempted to hit Coates in the end zone on a quick slant on 1st and goal from the Redskins 3-yard-line. Breeland, however, undercut Coates’ route and Roethlisberger’s pass appeared to bounce off of the hands of both players before finally being corralled by Rogers for a touchdown.

After the game was over, Roethlisberger talked about the play and how he hopes both of his young wide receivers will learn from the mistakes both made during it.

“Kind of a unique thing,” Roethlisberger said. “That’s one where two young guys need to learn exactly what to do on that play. Eli’s got to bring two guys with him and Sammie’s got to come flatter. Sometimes the ball bounces your way”