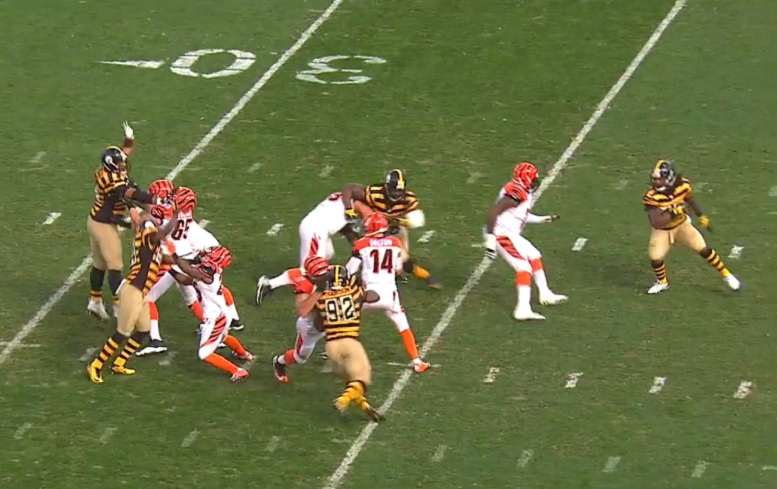 The Pittsburgh Steelers will host the Cincinnati Bengals Sunday at Heinz Field and the team’s defense will be looking to control quarterback Andy Dalton during the game. Last week in the Bengals regular season opener against the New York Jets, Dalton was sacked a total of seven times and mostly by a four-man pass rush. The Steelers defense, on the other hand, failed to record any sacks in their opener against the Washington Redskins and in addition to that, chose not to blitz quarterback Kirk Cousins very often in the game.

Ahead of Sundays game against the Bengals, I thought it would be fun to look back at the Steelers Week 8 game from last season between the two teams as it relates to how the defense was able to attack Dalton with the pass rush and many times defensive coordinator Keith Butler decided to blitz.

As you can see in the table below that was taken from our defensive charting from Week 8, the Steelers defense rushed Dalton with 5 or more players on 16 different non-penalty pass plays during the game. However, only 9 of the plays included a blitz, or any unexpected rusher. Against the Steelers five-man rush, Dalton was 7 of 13 for 91 yards. He scrambled on one other drop-back for a gain of 5 yards and was sacked on three other plays, which all included blitzes.

Here is a look at all three of those sacks.

3rd and long on this play deep in Steelers territory and the Bengals run all verticals. After sugaring the A-gaps, linebacker Ryan Shazier drops into coverage. The solid man-coverage under a two-deep shell is the key here and the five-man rush does enough to force Dalton from the pocket and linebacker Bud Dupree is able to haul the scrambling quarterback down before he can fully escape. Expect a lot of double A-gap looks Sunday against the Bengals.

On this sack of Dalton, the Steelers send 5 again via a cross blitz of the inside linebackers. Jarvis Jones does a great job of getting his inside arm up underneath Bengals left tackle Andrew Whitworth and while he misses getting Dalton on his first pass, he and inside linebacker Shazier continue fighting on the play to split the sack. Remember, it was 3rd and long on the play as well and once again, the coverage was great.

Another cross blitz here on this first down designed roll-out by Dalton after play action. As you can see in the all-22 view below, the Steelers secondary really does a great job in coverage and as a result, Dalton has to take the sack outside the pocket.