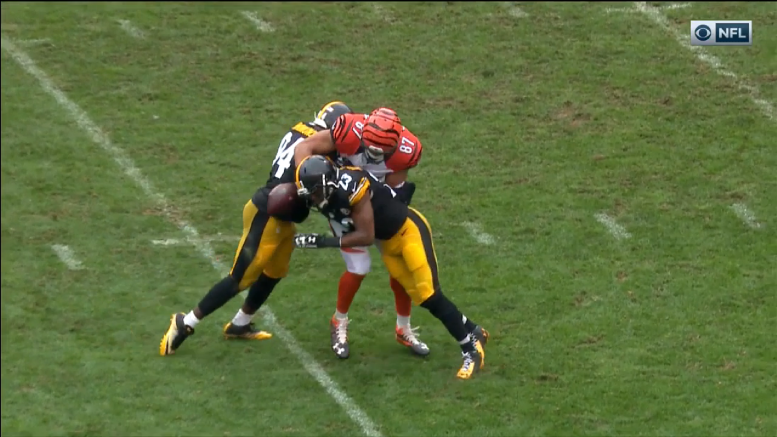 Pittsburgh Steelers 10th-year veteran inside linebacker Lawrence Timmons received a lot of criticism for what was perceived as a bad start to the season in the opener in Washington, where he was noted for missing some key tackles over the course of the game and struggling in coverage. But I would estimate that he had a pretty solid rebound game against the Bengals.

In particular was his impact in the run game, as four of his seven tackles went for run stops. He had five tackles against the run, with the fifth tackle being a four-yard gain on first-and-10, which is on the very border of a successful play.

His first tackle came on the opening drive of the game, on which he stayed home over the middle as Jeremy Hill came back through the A Gap, where the veteran brought him down for a two-yard gain on second and eight.

Early in the second quarter, he got the Bengals first drive of the quarte off to a bad start with a run stop for no gain. Backed up at the 10-yard line, Giovani Bernard looked to go off right tackle, but Ryan Shazier absorbed the block and allowed Timmons to make the play, anticipating his inside cut on a day in which he forced several missed tackles against the Steelers’ defense.

He did very nearly the same thing on the Bengals’ next drive, which led to another three-and-out. It was Hill this time looking to cut back and thinking that Timmons had overrun the play, but the linebacker was able to reach back and make the tackle for a one-yard gain.

His impact was not limited to the run game, however, as he did a nice job of reading a screen pass to Bernard and chasing down the play to make the tackle, cutting inside a downfield blocker to hit the right ankle that would get him to the back after a seven-yard gain.

Later on the same drive, Bernard nearly did spin out of Timmons’ grasp, trying to work back to the back side of a first-down run, but the veteran linebacker once again was able to hang on and make the tackle, along with help, after a short gain.

On the very next play after that, he dropped into a deep coverage and was able to read the pass to his left to C.J. Uzomah. Both he and Mike Mitchell converged on the tight end as he was closing in on the catch, and the combined impact jarred the ball loose for an incompletion.

The Bengals failed to convert on the ensuing third-and-long play. Overall, the game showed that Timmons can still be an impact player, and this is in spite of the fact that he was off the field for over 40 percent of the game, especially in the second half. His run stops on early downs helped produce several poor drives for Cincinnati, and he can still track the play down the field.