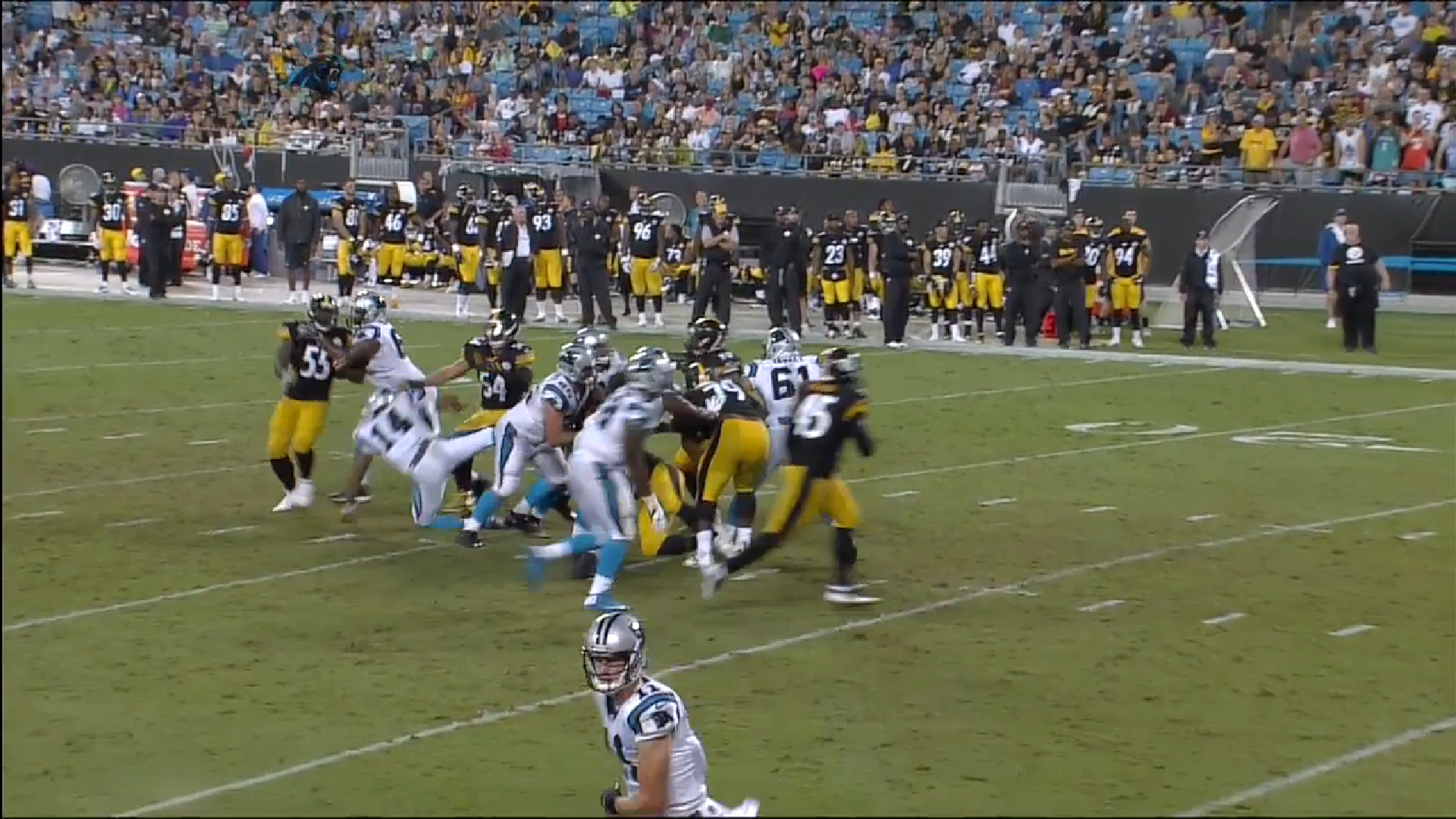 The back end of the inside linebacker depth chart has been—as it often is, quite honestly—arguably the most contentious part of the Pittsburgh Steelers’ training camp and preseason slate. The only ‘newcomer’ that seemed assured of a spot was L.J. Fort, who was with the team last year and ran with the second-team defense consistently all offseason.

He showed why that confidence was well-founded over the course of the preseason with his play both on defense and on special teams, but I took an especial liking to some of the things that he showed in the preseason finale against the Panthers.

Although it didn’t necessarily start out that way. On the second play of the game, Fort, perhaps due to a miscommunication with Vince Williams, attacked the wrong gap, and the result was a 15-yard run. The Panthers were pretty successful for the most part running the ball early, though this was the only knock against Fort really in that department.

He came back to finish the drive strong on back-to-back plays to force a third-and long, however, displaying a surprisingly adept ability to stack and shed against contact. In this first instance, he scraped and fended off the advancing center to make the tackle for a loss as the play was forced laterally.

He came back on the very next play to engage the tight end lined up in a wing right in the hole, and scraped off contact to make the tackle for a short gain.

About midway through the first quarter, Fort continued to display an encouraging adeptness in engaging and releasing to make plays. He did so on a second-and-10 running play when the center tried to come out and reach him, instead shedding and stopping the runner for a short gain.

On the final play of the third quarter, he was quick to attack the open gap, and though the back initially eluded him, he wrapped up and held on, twisting the runner to the ground to force a third-down situation. Fort and the defense nearly stopped them again on third-and-short, with a big collision at the first-down marker.

Flashing ahead all the way to late in the second quarter, I wanted to highlight a play in coverage from Fort, where the replay gives a better feel for the circumstances. Intended or not, the ball was well-placed in such a way that the linebacker would never be able to break on it, but he does a nice job of breaking on the receiver quickly and making a fast tackle.

An essential part of the Steelers’ defense is the inside linebacker blitz, often both of them at once, but also individually. Fort did well on the blitz a couple plays later, actually getting a good piece of the quarterback and knocking him down.

Fort has played well for the Steelers through two preseasons now, so it doesn’t surprise me to see him take over as presumably the fourth inside linebacker on the roster. He may have a journeyman background, but I think he has earned the opportunity on the field.