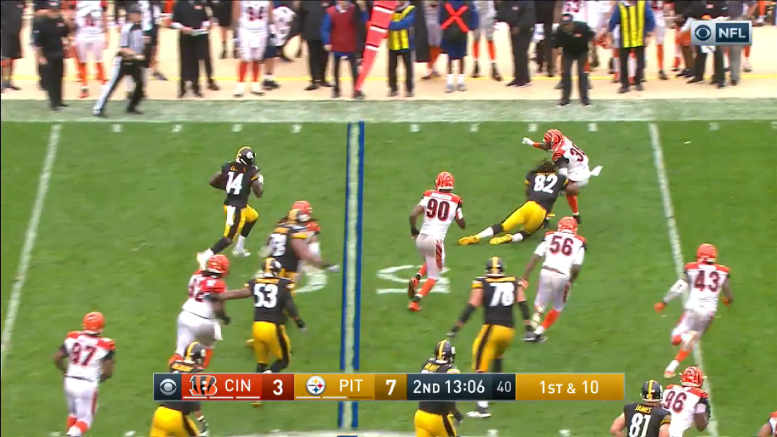 In hindsight, it certainly appears to be a good thing that the Pittsburgh Steelers made the decision, which many seemed to believe as a mere afterthought, to bring back tight end David Johnson, whom they originally drafted in 2009, and who played in Pittsburgh until 2013 before spending two seasons in San Diego.

As of this moment, he is the team’s best blocker, but really, it is his versatility that is his greatest asset, and the weight loss over the course of the offseason also seems to be serving him well, as he did a little of everything on Sunday, including catching his first pass of the season on 26 snaps.

The first play I would like to point out came on the first play of the team’s third drive in the first quarter, and it was the first snap of the season in which the Steelers used a player lined up as a fullback. Lined up shaded inside the left tackle in the backfield, Johnson did a nice job of penetrating the B Gap and driving the outside linebacker out of the lane, though it was not the gap the play ran through.

The veteran tight end got his first reception of the year on the final play of the first quarter for five yards, and he lined up shaded off the line on the left side. On the snap, he swept across the formation as the offensive line shifted to the left. Johnson left the rusher to go free in order to accept the screen from Ben Roethlisberger, showing soft hands on the catching and turning and running on the move on a play that I think shows off the fact that he is in better shape than he has been for a while.

Toward the top of the second quarter, the offense ran an end-around for Sammie Coates around the left edge for a six-yard gain. On the play, Johnson lined up as the far tight end on the back side of the play, but swept play-side after the ball was snap and served as the lead blocker for Coates. He did an excellent job of getting his body into the nearest defender and sending him backwards and into the ground.

At the top of the third quarter, on their first offensive play of the half, the Steelers looked to get Antonio Brown jumpstarted after a slow first half. Brown motioned to the right side prior to the snap, where Johnson set at the end of the line. On the snap, Johnson took off to his right and Roethlisberger fired a quick pass to Brown, with the tight end getting in front and harassing Vincent Rey before turning upfield to look for another target. This could have been a pretty nice play if Brown was able to get beyond Rey, but it is a good example of Johnson’s improved athleticism that is helping him succeed early on in his second stint in Pittsburgh.

Later in the quarter, on the first play of the next drive, the Steelers motioned both tight ends from the left to the right side pre-snap, with the wide receiver moving in near the line. On the snap, Johnson, the inside tight end, squared against Rey on the edge and turned him out of the gap around right tackle, which the back exploited for an eight-yard gain. He shows nice leg drive in staying with the block here.

Finally, we get a look at the next snap with Johnson lined back up at fullback, this time on the right side. This proves to be a variation of their go-to counter run, pulling the right guard and utilizing Johnson from the fullback position as the second lead blocker. On this play, he does a nice job of reaching the edge defender, in this case Rey again, popping him back to let DeAngelo Williams win the edge for six yards as the veteran blocker continued upfield looking for more work.

All in all, this was a very encouraging performance from Johnson, who to me has more than justified his being brought back. Several of these plays highlight the fact that he is no longer an athletic liability, and his versatility to line up in-line, in the backfield, offset, or on the move is a tremendous plus. If he can get more involved in the passing game, with his tight end partners each catching a touchdown pass, that would just be the cherry on top.