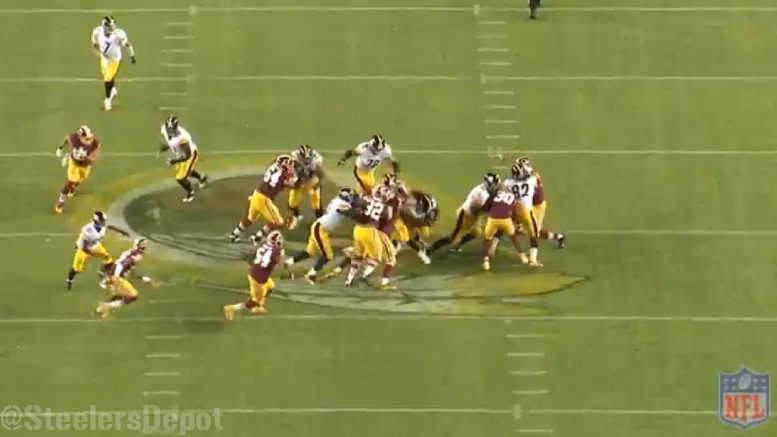 Pittsburgh Steelers right guard David DeCastro, at least in the eyes of those who vote on such things, made the leap last year from just an above average player to an All-Pro. Through all of his career, however, he has had one signature characteristic, and that is his ability to pull, which the Steelers have used liberally.

Monday night in Washington was no exception, as the offense ran behind a DeCastro pull block on a number of occasions, but they were not all of the typical variety featuring a pull from right to left as a lead blocker to the outside of the formation, which has been arguably their most successful staple run over the past three seasons.

The first example that I would like to point out comes early in the second quarter, though it produced just a three-yard gain. The Steelers set two tight ends to the left of the formation, with DeCastro sliding and pulling around the C gap between the two tight ends. He did his job in digging the safety out of the hole, but Washington closed in quickly.

The Steelers opened the second half with a seven-yard run around left end, and they did so running out of the same formation with the same blocking personnel, though with a bit of window dressing with a wide receiver motioning in the direction of the play before the snap.

On this play, DeCastro pulled left and bounced out all the way to the edge after considering the B gap, with DeAngelo Williams following behind his lead blocker. The guard was able to seal the edge defender, the cornerback, and Williams filled in behind for a positive opening play.

Later on the same drive, we get a look at something that is hard to execute without the sort of talent that the Steelers have along their offensive line, particularly with DeCastro and center Maurkice Pouncey. Here we have the pin-pull sweep, with adjacent interior linemen pulling to the right.

Unfortunately, this is not the most well-executed play. Typically, a player is told to get a hat on a hat, to block the first guy in a different color you see. When you have two players pulling, however, coordination is required, and he seems perfectly obvious that DeCastro should have held the linebacker for Pouncey, right behind him, to pick up, instead moving ahead to get on the safety, who made the tackle for no gain.

He did make up for it by the end of the game, of course, as he often does. He pulled around the left side late in the fourth quarter to seal the linebacker, and Williams split two defenders to lead to a 15-yard touchdown to seal the game.

DeCastro had, unsurprisingly, an all-around good game, and while the running game did not produce any explosive plays, it was successful and efficient. The right guard’s blocking was a staple of that effort, as was the clean pocket that produced a 300-yard, three-touchdown passing game.