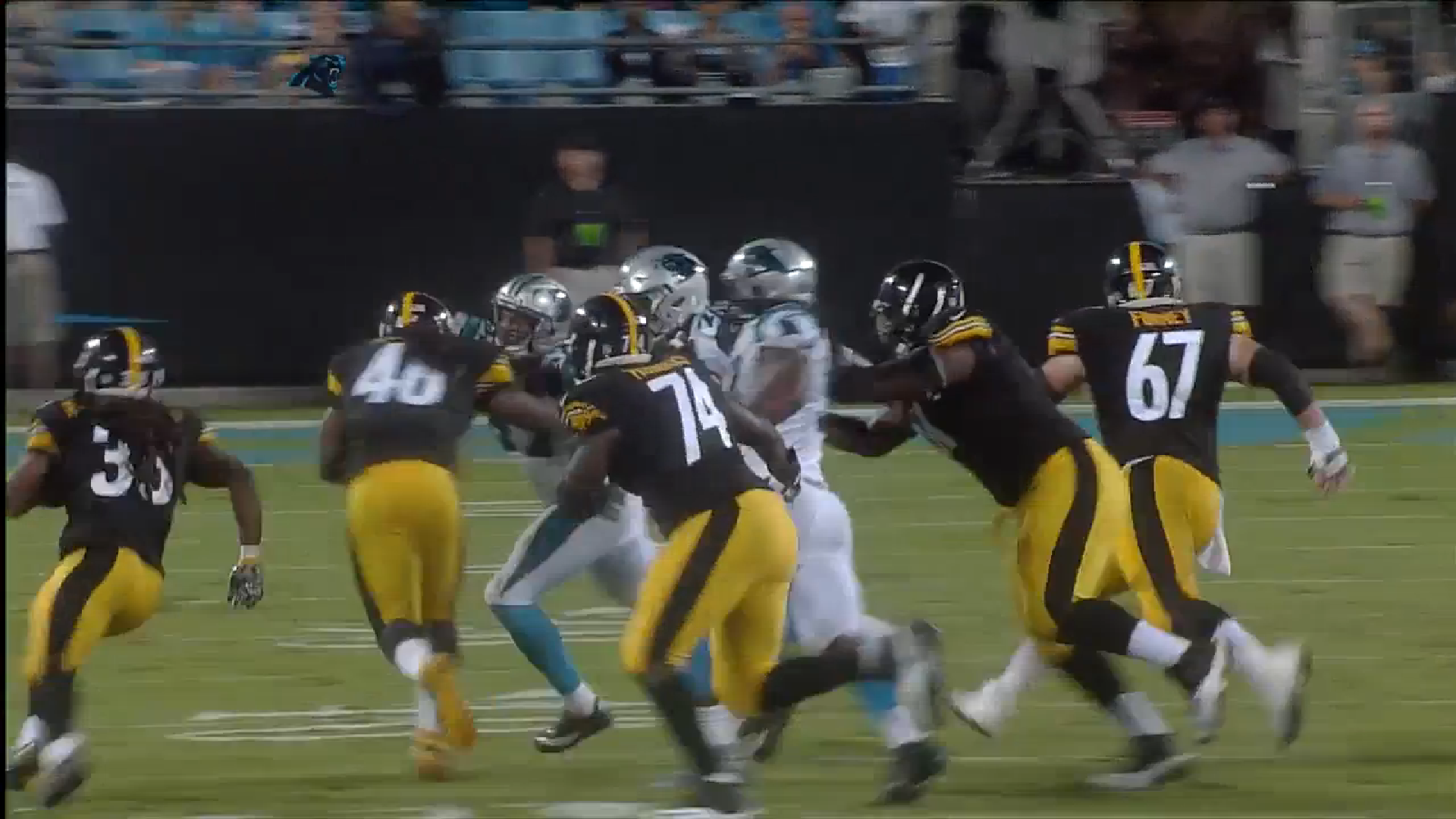 Pittsburgh Steelers first-year interior offensive lineman B.J. Finney was a bit of a cult hero in just the first few minutes of first joining the team’s 90-man roster following the 2015 NFL Draft when a video surfaced of him tearing up while announcing to his friends and family that he agreed to sign with his favorite team, the Steelers.

While the former undrafted free agent did not make the 53-man roster as a rookie, he did spend most of the season on the practice squad, and later in the year received a pay raise equivalent to a rostered salary. He made the team in his second go-around, however, playing primarily at center throughout the preseason.

While Finney may not be the most athletic lineman in a generation, he is certainly a load, and has plenty of functional strength, as he showed in rooting out a defensive tackle from the running lane, first on a combo block, and then on his own when the guard peeled off to pick up another defender.

Finney actually played the entire game, one of two players to do so, and the only one to do so at just one position. Over such a long period of time, there would naturally be some ups and downs. And the downs often came on the plays in which he was asked to move. A late-third-quarter second-level block attempt, for example, found him quickly outmaneuvered as his man ended up making the tackle.

When given the opportunity to simply go one-on-one with an offensive lineman on an aggressive play such as a run up the A gap, however, Finney can certainly hold his own—at least against some backups. Though this particular play gained no yards, the center was able to take his man off the ball cleanly without much help.

Finney and the left guard also helped clear the way a few plays later for the Steelers’ lone rushing touchdown of the preseason, a one-yarder against the goal-line defense of the Panthers. With the right guard picking up the linebacker sneaking through the hole, Daryl Richardson was nearly able to walk in for the score.

Then we have a mid-fourth-quarter example of where his lack of mobility is an issue. The Steelers attempted to execute an outside zone run to the left, with the whole line flowing in that direction, but Finney was unable to reach the middle linebacker, and he ended up making the tackle and stripping the ball out, with the defense recovering.

Finney is sort of the John Bunyan of the Steelers’ offensive line group among fans, about whom tall tales are told, few of which may actually be true. He certainly has the potential to develop into a pretty solid backup, but he clearly has some limitations, particularly with respect to mobility, that will hold him back some.