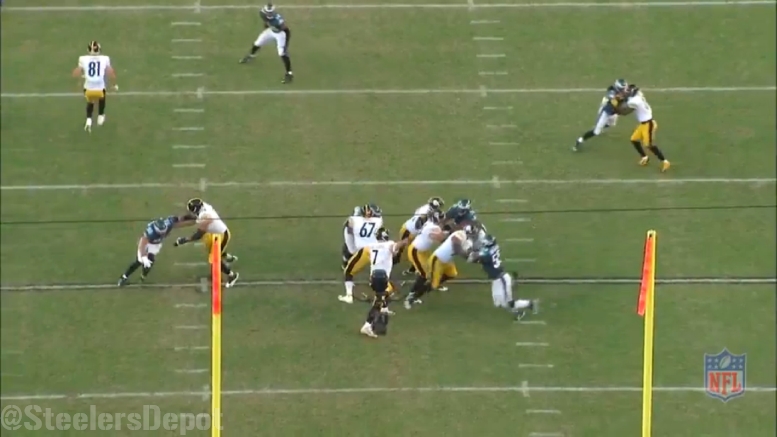 I was all set to get excited about B.J. Finney making his first career start before the news broke yesterday that he suffered a finger injury during practice that seems likely to keep him out of Sunday’s game. But he still got a long look on the field earlier this week against the Eagles, and I still want to take a look back at it.

Finney entered the game late in the second quarter, but there wasn’t much interesting to note until early in the third. This play below is fairly typical of the day, though one of the worse examples, of Finney—and the rest of the line—trying to absorb the Eagles’ ferocious front four. On this occasion, he nearly got walked back into the quarterback.

He did a better job a couple of plays later, and throughout much of the second half, when he was able to get a hand on the rusher and turn him to either side. On this play, Ben Roethlisberger actually walked into him a bit, sliding about five yards to his left from where the ball was snapped, but this is likely a completed throw for an explosive play if the target continues his route upfield as Roethlisberger anticipates.

Here is a fairly textbook example of Finney absorbing the bull rush and using active feet to keep his leverage. He did ultimately get walked back some, which is basically the purpose of a bull rush, but Finney kept his defender in front of him and generally in his control, giving up some real estate only when it was warranted to keep his leverage. He certainly wasn’t put on skates.

There were a few occasions during which he was able to get beaten with a swim move, and one of those occasions came against Fletcher Cox, whom the Eagles started to flip over to his side more often as the game advanced. A good first punch was all that was needed to knock Finney off his base and let the rusher dip under and around for a pressure, though Roethlisberger did get free and was able to get a pass off.

Early in the fourth quarter was another example of a fairly standard bull rush, bit this is not one of the ones in which Finney comes off looking halfway decent. This time he really struggled not to get stood upright, and once Roethlisberger flushed out to his left, the defender was able to get free.

Finally, late in the fourth quarter, he did a better job against the same defender, as he seemingly tried to set the guard up for an inside move. Finney read his movements and was able to ride him through the pocket and out of the danger zone.

As I said, overall, it was a solid performance for a player seeing his first action in his career and coming off the bench in the middle of a game in which the defense is rearing back to get after the passer for most of the game. A lot of it wasn’t pretty, but it was a stepping stone. Hopefully he can play on Sunday, but it seems unlikely.