Many are reading the aggressive and dominant preseason play of second year OLB Anthony Chickillo with a magnifying glass, mainly because of the recent news regarding OLB Bud Dupree. Fans are left hoping that his authority can be translated into the regular season, as he’ll be slated as more of a fixture in the Pittsburgh Steelers defense than originally anticipated.

Fans are also hoping a catalyst steps forward to kick-start the group of pass rushing linebackers, as they’ve struggled mightily in recent years. Let’s take a look at his preseason finale game against the Carolina Panthers, who, if you were able to watch the game, was one of the bright spots before he left with a minor injury.

Chickillo was certainly one of the more interesting storylines as the game progressed, as I wrote in the game recap that he should have been made to pay rent for how often he was in the Panthers’ backfield. His first sniff at the quarterback came during the first quarter; fingers in the ground, he flew off the line as soon as the ball was snapped.

Many young pass rushers struggle to find their hand-to-hand combat, but Chickillo looked like Mr. Miyagi’s apprentice with the way he was able to control his arms. He slapped the hands of T Donald Hawkins (who may or may not have checked under his bed that night to make sure Chickillo wasn’t there) and dipped the shoulder perfectly, as pressure was also being added from the opposite side by LB Arthur Moats, resulting in a combined sack.

Fast-forward to the beginning of the second quarter, and it was clear Chickillo was a man on a mission. This time you see him in more of a traditional 3-4 OLB stance, squatting and harnessing all of that power built up in his thighs to charge as soon as the ball moves. 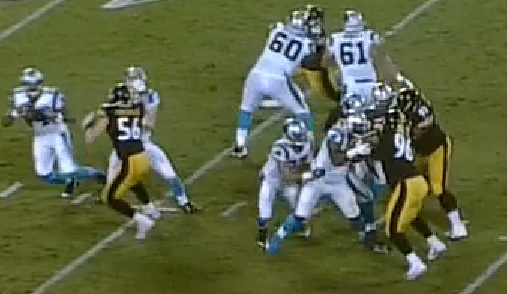 Unfortunately for TE Beau Sandland, whose job on the play was to block the incoming pass rusher, Chickillo harnessed enough lower body strength to move a truck. Upon contact, Sandland is pushed back by Chickillo’s straightforward bulrush about 7 yards, forcing QB Joe Webb to begin rolling out of the pocket. This did not result in a sack, but did make a considerable dent in the quarterback’s comfort zone, and is sometimes just as valuable.

Justice was finally served before half, as Chickillo finally recorded his first individual sack of the game.

Fingers in the ground once more, he swings to the outside of Hawkins, and thanks to some retain from the opposing side, Joe Webb begins to roll out into the path of Chickillo. One more swim move later, and Chickillo’s grasping Webb to the ground.

Anthony Chickillo ended the game with a total of 4 tackles and 2 tackles at or behind the line of scrimmage, but it was his all around play that sometimes yielded no statistics that caught the eyes of many. His combat and bulrush set a great foundation for growth; thanks to Dupree’s IR designation, he may be called upon to battle more often than you’d expect, coming in as relief for OLBs James Harrison, Arthur Moats and Jarvis Jones. Here’s to hoping he can translate some of that preseason success into the regular season.