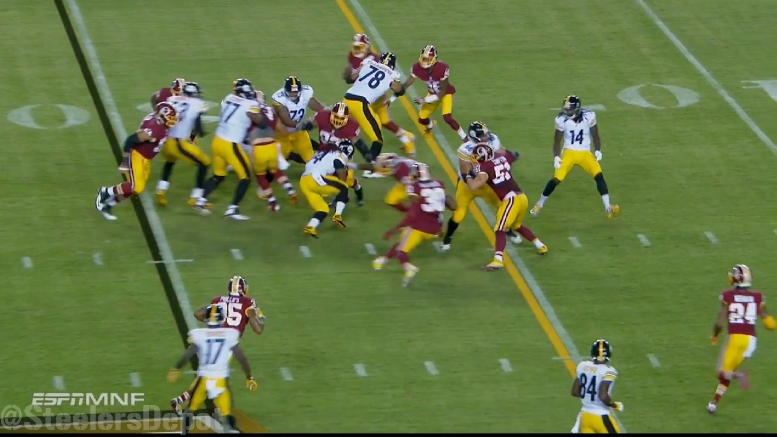 From 2012 to 2016, the Pittsburgh Steelers have opened the season with four different starting left tackles. Alejandro Villanueva is the most recent, but he did start 12 games, including the playoffs, last season. Yet his development is still important to monitor given his lack of an offensive line background.

This is the first time in his career, at the age of 27, and in his second season on a 53-man roster, that he is a starter because he is the best option on the roster, whereas his entrance into the lineup last year was through a road paved by a blown knee.

It should not be a great surprise to find that his performance in the season opener was a bit of a mixed bag, as he remains a work in progress. The first play that I want to highlight comes on the Steelers’ second drive of the game, and demonstrates quality effort on a run play. Off the snap, he jars the defensive tackle before scraping off to pick up the linebacker. I believe that if the back would have stayed patient, he would have found that the hole was there.

On the other hand, while his results on the Steelers’ lone interception of the game did not contribute to the turnover—although he did allow penetration on the lone sack that produced a fumble—I do think it is pretty typical of where he is right now.

With Preston Smith lined up wide of him and no tight end help, Villanueva initially sets and punches well, but then loses his back footing and causes him to bend at the waist, losing leverage and focus as the linebacker then wins the hand-fighting skirmish. Smith got around the corner, but nowhere near in time to affect the play, and Villanueva did recover some at the end.

Smith got the better of him again on the first play of the second quarter, showing that similar issues can have a greater effect if the quarterback holds on to the ball longer. The rush in fact looked much the same in many respects, only this time the linebacker was able to hit the quarterback after the throw.

Two plays later, we are provided an example in theory of what Villanueva is capable of offering as a run-blocker that possesses both size and reasonable athleticism, as he first chips the lineman to his left to set up a reach block for his tight end before moving to the next level to pick up the safety, though the run never developed that far downfield.

Smith was able to get the edge on Villanueva again early in the fourth quarter, this time using a bull rush to drive the left tackle into the pocket, reaching beyond him to grab at the quarterback, but the result was only to get him to step up and check the ball down to his running back.

Throughout most of the night, however, Ben Roethlisberger spent his time getting the ball out quickly, so there was often not a great deal to say about Villanueva’s pass protection. While he is certainly not overmatched, he is going to give up his share of pressure as he continues to develop.