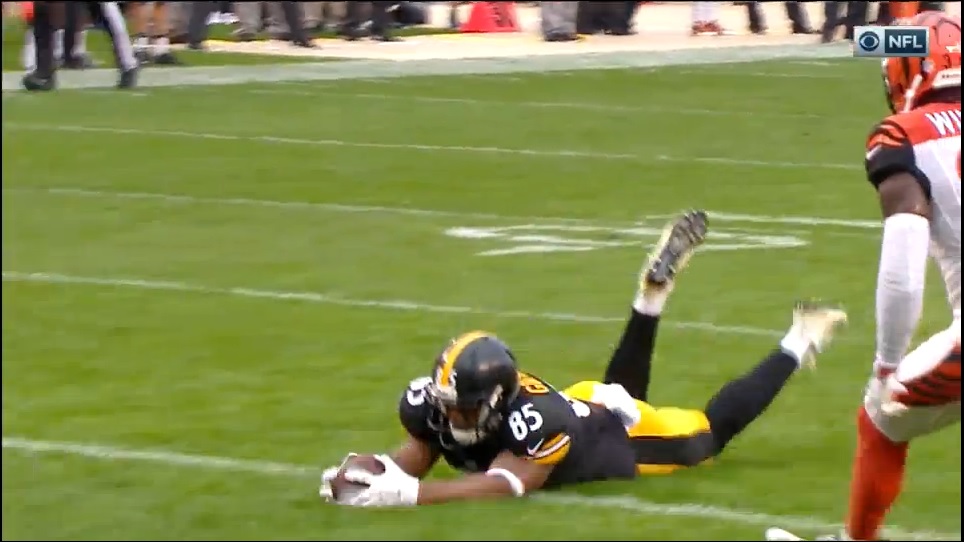 Definitely a weird day all around. At least the Cleveland Browns lost. That helps reestablish a sense of normalcy.

Got a lot of fun stats today. So let’s get to it.

Finally, it’s also the third time in his career he’s had a completion percentage under 55% and thrown for at least three touchdowns. 2007 against the Jacksonville Jaguars (a 28-22 loss) and 2007, a 34-7 win over the Cleveland Browns.

– DeAngelo Williams’ 32 carries are a career high in his NFL career. Only once before did he tote the rock 30 times, way back in 2009 with the Carolina Panthers. He rushed for 152 yards that day. Today’s performance is tied for the 7th most carries he had in a game, college or pro. His college high was 39 against East Carolina in 2005. He would run for 226 yards that day.

He’s the oldest running back to have at least 30 carries in a game since Marcus Allen in 1994. Only six players, before Williams, have done so at age 33 or older. Two of those players, now three, were Steelers.

But he’s not the oldest in Steelers’ history. Franco Harris and John Henry Johnson did so in their careers. Harris against the Seattle Sehawks in 1983 and Johnson did it twice – once in 1963 and again in 1964. In the former, he ran for 200 yards on 30 carries.

– Antonio Brown’s 39 yard performance was his worst as a starter and with Ben Roethlisberger for an entire game since October 28th, 2012, when he caught four passes for 38 yards against Washington.

Only once last year, even with Mike Vick, did Brown have a worse stat line: 3 catches for 24 yards against the Arizona Cardinals.

His four catches on 11 targets is the lowest mark he’s ever produced in his career with that many looks. His previous low was five, done once, in 2012 against the Baltimore Ravens.

– Xavier Grimble joins Heath Miller and Matt Spaeth as Steelers’ tight ends to record their first catch for a touchdown. Jesse James and Mark Bruener caught theirs on catch #2.

The last time Grimble had a stat line this good was November 30th, 2011, while he was still playing for USC. That day, he caught two passes for 28 yards and a touchdown. His touchdown went for 22 yards. The other, obviously, a six yard reception.

– Including the postseason, Chris Boswell has made 19 of his last 20 field goals. And all of his extra points. Mr. Consistent.

– With a minimum of four punts, Jordan Berry had the third highest average of his Steelers’ career, 47.1 today. Other two are a 49 yard average against the Los Angeles Rams and 47.6 against the Arizona Cardinals.

– The Steelers held A.J. Green to two catches for 38 yards today. It’s his second worst performance ever against Pittsburgh only bettering his one catch for eight yards game in 2012. And heck, you could argue that one was better – he found the end zone that day.

– The Bengals were held to just 46 yards on the ground today. It’s their lowest since they were held to 14 yards in 2012 and now only the fifth time since 1994 the Bengals have been held under the 50 yard threshold.

Cincinnati is 1-4 in these games.

– Today, the Bengals had more first down from penalty (3) than they did from rushing (1).

– This is the first time since 2010 the Steelers have allowed just a pair of touchdowns in the first two games total. They gave up only one that year. They did it five times from 2005-2010.

– On the negative side, it’s just the second time since 2001 the Steelers have registered just one sack in their first two games. And only the sixth time ever, at least, since stats were tracked as an official stat.