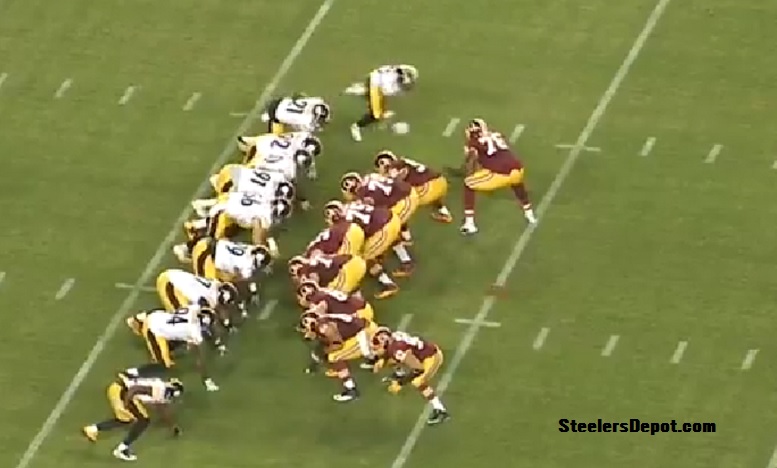 In the grand scheme of things, Pittsburgh Steelers rookie cornerback Artie Burns being penalized for being offsides late the first quarter during field goal attempt by the Washington Redskins in Monday night’s regular season opener really was an insignificant call. with that said, Steelers special teams coordinator Danny Smith wasn’t happy with penalty and during his weekly segment on Steelers Nation Radio, he explained what he really thought about it.

“That was a bad call, he wasn’t offisides,” Smith said of Burns during his interview with Bob Labriola. “We looked at the film this morning. We told the official what was going to happen. We did the same thing in the playoff game against Denver, it wasn’t called and the official made a mistake. It was not offsides.

As you can see in the few animated gifs below, it appears as though Burns timed the snap perfectly on the attempted field goal. While Burns ultimately failed to block the successful kick, the Redskins still chose to keep the points on the scoreboard being as they still wouldn’t have achieved a first down had the penalty yardage on Burns been assessed.

Labriola asked Smith what he meant by telling the officials prior to the game what was going to happen in that situation that we saw Monday with Burns on the attempted field goal block.

“You try to help situation scenarios and through your film study and your preparation, you can predict some things in the course of a game, and without too much information, I approached them about that,” Smith said. “I went through everything with them and the official made a mistake. We looked at the film, obviously I looked at the film right after the game, but I looked at the tape with the players this morning and they were shocked. He was not offsides.”

While Burns didn’t get a block on the field goal attempt in question, he certainly had a great get-off along with what appeared to be perfect timing. Being as he ran track at Miami, that probably isn’t overly surprising. With all of that said, it’s not hard to speculate that the Steelers first round draft pick this year might ultimately wind up with a kick block or two during the 2016 season and especially if Smith keeps trying to warn the officials ahead of the start of games as to what they might observe during an individual contest.

While not really a public session with the local media, it will be interesting to see if Smith hears from the league as a result of him criticizing the Monday night penalty call by the official. I doubt he will, but you just never really know for sure.