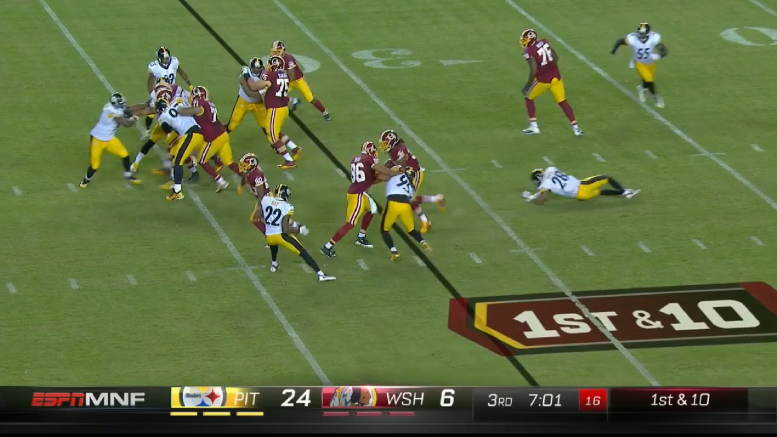 Two nights ago, defensive back Sean Davis became the first rookie to start a season opener for the Pittsburgh Steelers’ defense since…well, 2014 when Ryan Shazier did it. But nevertheless, it is a pretty rare occurrence all the same, and in fact he was one of just three rookies to see some meaningful playing time tonight, as both Artie Burns and Javon Hargrave played as well.

But we would not be doing our jobs if we did not point out that Davis struggled in his first action of the regular season. In particular, he was responsible for missing several tackles throughout the game, something that we saw also in the preseason as he learns to adjust not only to the slot, but to NFL-level competition.

He did come out of the game with four tackles, three of which were solo, with the first tackle of the game coming on the opening drive on a 14-yard reception in which three defensive backs looked to bring down the tight end after he forced a missed tackle to gain a first down.

A couple of plays later, on the same drive, he did show quality recognition in run support, breaking away from coverage and hustling into the backfield, though there were already multiple Steelers on the scene to make the stop for a four-yard loss.

On the following play, which was a third-and-14, Davis was shifted to the back end at safety with the Steelers moving to their quarter package and bringing Burns onto the field. On an underneath pass to the tight end, the rookie safety missed an open-field tackle on the tight end that allowed him to gain 13 yards instead of five, coming too close for comfort to extending that drive.

On the final play of the subsequent drive, he was in coverage on Jamison Crowder on a third-and-six on which he provided the receiver space to make a catch—if only the ball had been delivered on-target, and not both wide and to the left, forcing Washington to settle for a punt.

On the first defensive play of the second half, he came flying up into the box on a run fill on a play that was stopped for a loss, though he shot wide of the mark and was not in on the tackle, as the initial hole closed the and runner bounced it out a gap wider. He missed a tackle in the backfield on the first play of Washington’s subsequent drive on a run that went for 12.

He was in on the final three plays of that drive, however, which began with a first-and-20, making two tackles after receptions of six and eight yards, and then was in coverage on Crowder in the far right corner of the end zone on a ball that was thrown away due to the pressure and coverage.

On the first play after Ryan Shazier tapped out of the game, the 20-yard reception with a bunch of broken tackles, Davis’ was the first missed tackle of the play, but new linebacker L.J. Fort got a miss-assist by helping to knock Davis off the ball-carrier.

The final two series of the game were fairly uneventful, with the first of them played out of the quarter package with Davis at safety. He did cap off his night with one finale missed tackle with 50 seconds to go, as he ended up missing at least as many tackles as he made during the game.