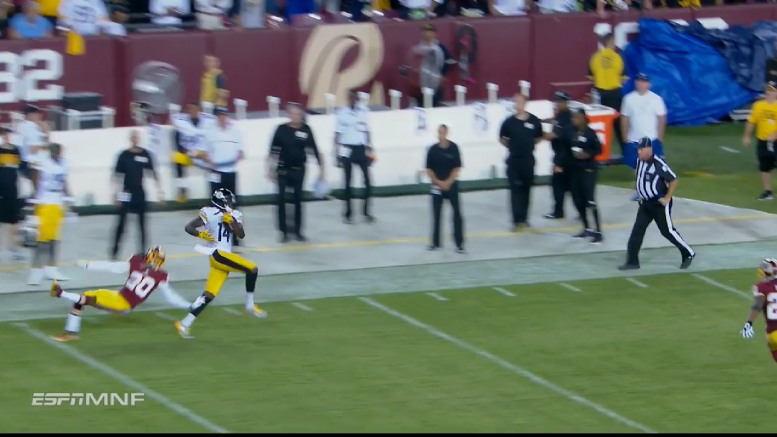 If there is one thing to be said for the absence of Markus Wheaton for the Pittsburgh Steelers in the regular season opener, it is that it gave the team the perfect opportunity to get a long look at the progress of second-year wide receiver Sammie Coates, who played extensively during the game and caught two passes on four targets.

There was a time at which I even wondered if Coates might not have to fight for a helmet on game days once the roster was completely healthy, but he even saw action on 11 of the Steelers’ 25 special teams snaps.

And on offense, he logged 44 snaps on 68 total, although that was three snaps fewer than the 47 snaps logged by fellow second-year wide receiver Eli Rogers, who came out of his first game with six receptions on seven targets—which includes one of Coates’ four targets, which ricocheted, and which Rogers caught for a touchdown.

Veteran wide receiver Darrius Heyward-Bey saw action on only 15 snaps during the game, seven of which were running plays, and he was not targeted on the eight other plays, two of which were run out of four-receiver sets.

It is somewhat interesting to note that the 11 snaps run out of two-receiver sets were evenly divided with five apiece between Coates and Heyward-Bey, with Rogers seeing one snap. But a deeper look indicates that three of Coates’ snaps were passing plays, whereas all but one of Heyward-Bey’s five snaps was a running play.

Of the Steelers’ 44 snaps run from the 11 personnel, Coates saw action on 37 snaps, replaced by Heyward-Bey for the seven missing snaps, meaning that Rogers played on all 11-personnel snaps. Only two of Heyward-Bey’s snaps from the 11 personnel grouping were running plays, and they actually produced a net of minus-five yards, with a run of no gain and a five-yard run supplemented by a 10-yard holding penalty.

The Steelers ran the ball out of the 11 personnel grouping with Coates on the field 12 times, producing 57 total yards for a 4.8-yard average and a touchdown, on which the second-year wide receiver was responsible for a block that helped the running back split two defenders for a 15-yard trip into the end zone.

It was not the only running play on which Coates was an asset, which is certainly progress from what was seen during the preseason last year and in his minimal playing time thereafter. He even drew praise from Ben Roethlisberger following the touchdown.

As a wide receiver, there is still progress to be made, for certain, as he was unable to secure a low screen pass in the right flat, but his two receptions were both highlight-worthy, and that is, in essence, kind of what his role is right now. It will be interesting to see how the return of Wheaton will impact his level of contribution, and if Rogers will take a hit in his playing time as well as Wheaton mixes his reps both in the slot and outside.