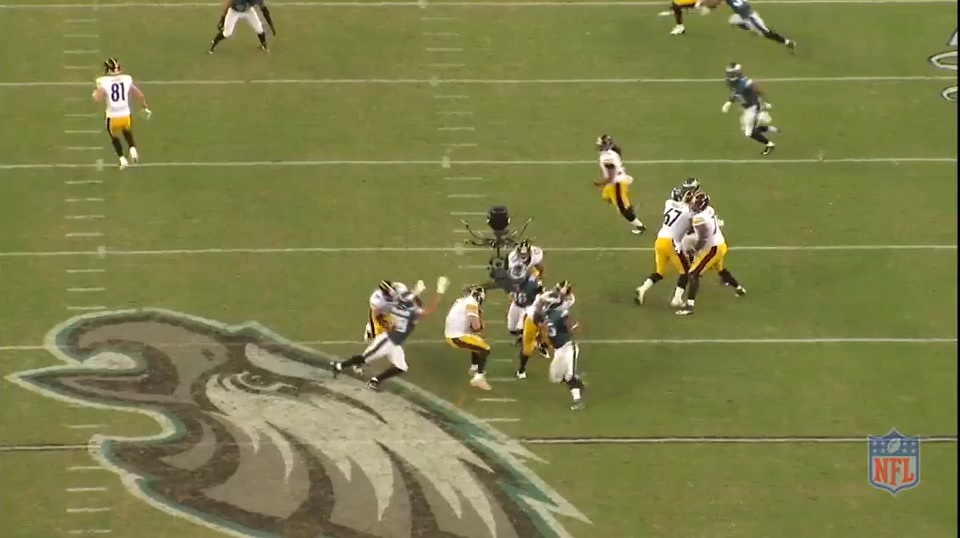 Unfortunately, we have more than one of these this week.

This is Todd Haley’s 62 Z Indy Post we wrote about last year and has been very successful for Pittsburgh. But it’s well defended downfield, the back of the end zone condensing things.

Ben Roethlisberger is about to hit DeAngelo Williams on his checkdown when he gets hit. Fletcher Cox bull rushes right guard David DeCastro and is able to walk him back into his quarterback. 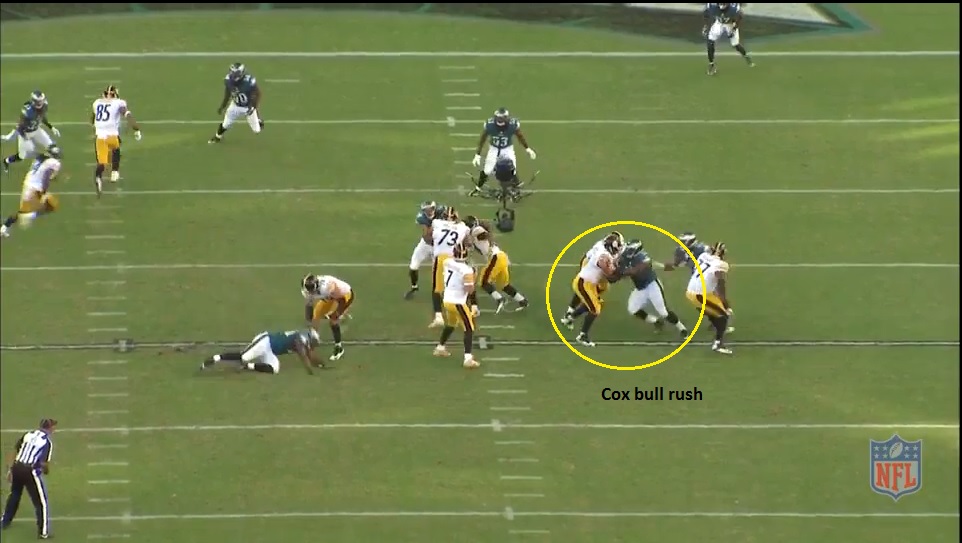 Cox is able to grab hold of Roethlisberger and hang onto him until the ref blows the whistle. 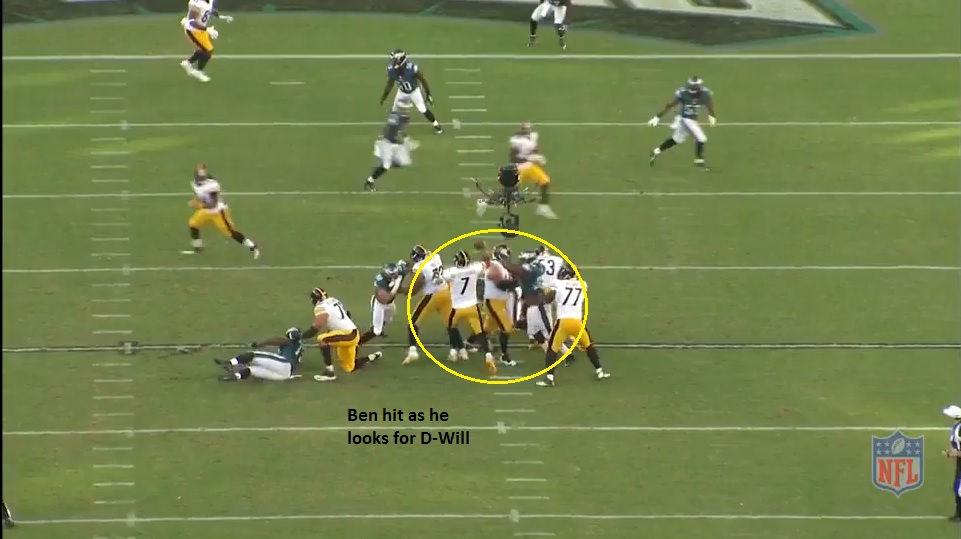 There might be a stunt here too but it doesn’t affect things very much.

To be fair, from snap to sack is about 3.3-3.4 seconds, typically a time when the ball is out. Roethlisberger probably took a little too much time looking for his checkdown, trying to fight too hard on 3rd and 8, so I’m not going to put it all on DeCastro for blocking past a point linemen usually don’t have to, especially as the quarterback hasn’t changed his launch spot.

This is a relatively simple breakdown, as far as these things go.

Blame: Half on Roethlisberger, half on DeCastro

Lot going on here. Both tackles, Alejandro Villanueva and Marcus Gilbert are beat on spin moves. Villanueva to the outside, Gilbert to the inside. 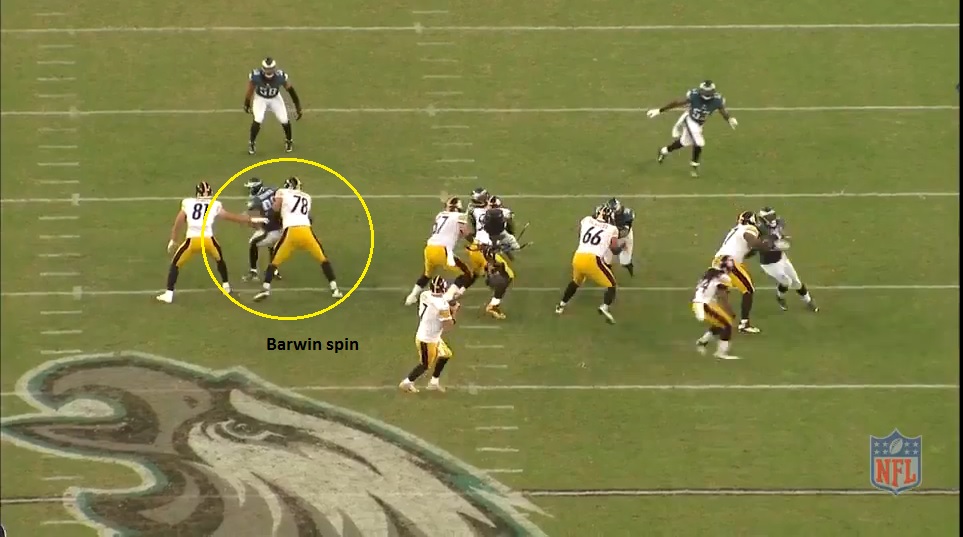 Villanueva struggles to recover and is leaning as Connor Barwin shows impressive flexibility to corner and force Roethlisberger up into the pocket. 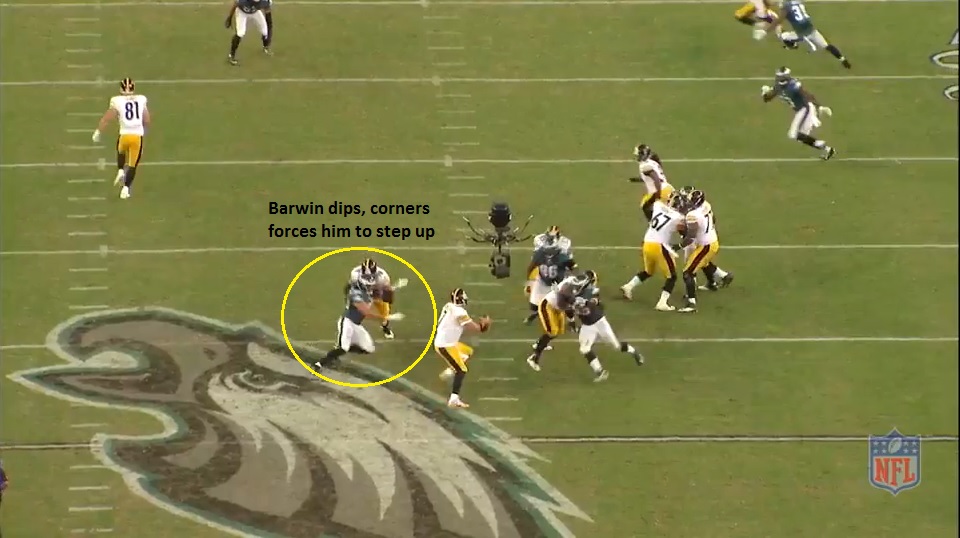 He doesn’t get any blame here ultimately but I’d be remiss if I didn’t mention Jesse James probably could’ve done a better job of controlling his gap, giving Barwin a little shove, before releasing into his pattern. You’ll see that in the GIF below.

Elsewhere, as Gilbert gets beat, DeCastro tries to recover for him. He looks to pass off the three tech, Bennie Logan, to Maurkice Pouncey and pick up the now-free LDE. 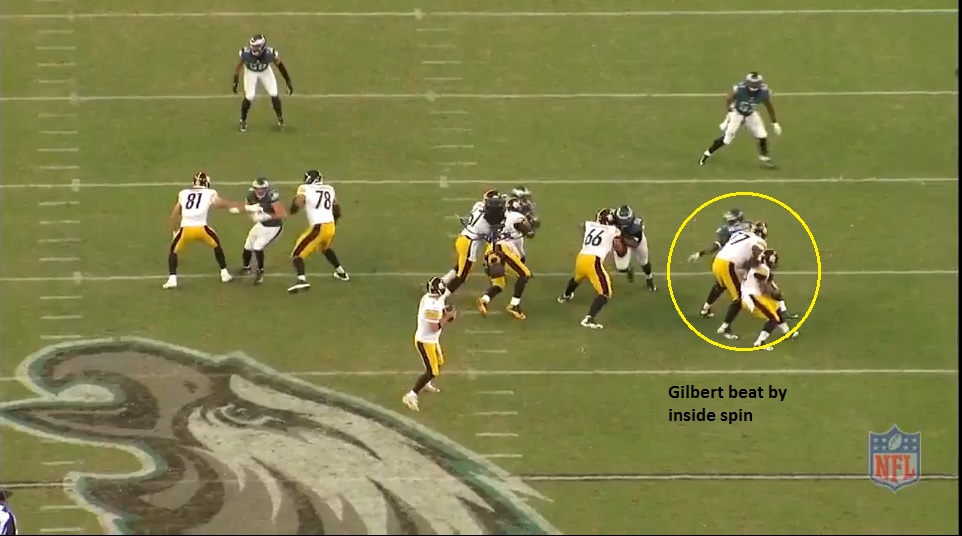 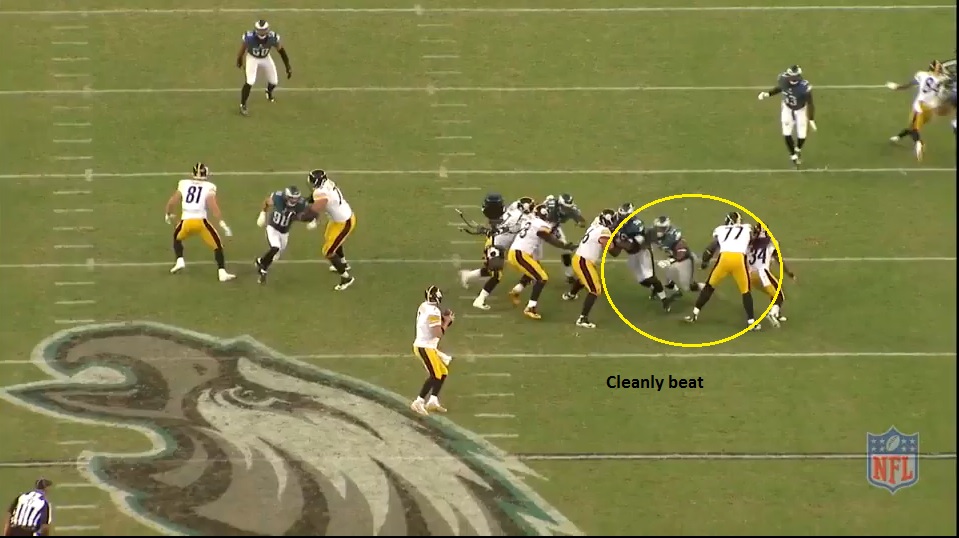 Pouncey isn’t able to reach Logan, sending both players – plus Barwin – barreling down towards Roethlisberger. Not a sight you want to see.

Roethlisberger is able to sorta duck down and avoid a huge hit, thankfully.

Gilbert winds up adjusting the brace on his injured shoulder and rotating his arm a couple times. Maybe the first sign I’ve seen of his visibly injury bothering him.

Going to put the blame on the tackles for losing the pocket. Not on DeCastro who was trying to clean up the mess.

Blame: Half on Villanueva, half on Gilbert

Again, pretty simple, as least from my 30,000 foot (I never underestimate how complicated pass protections are and the minute, inner-workings). DeCastro just gets straight run back into the pocket again, by Fletcher Cox.

There may have been an issue off the snap with his stance getting too wide, well beyond shoulder-width, but other than that, his technique isn’t terrible to defend the bull rush. 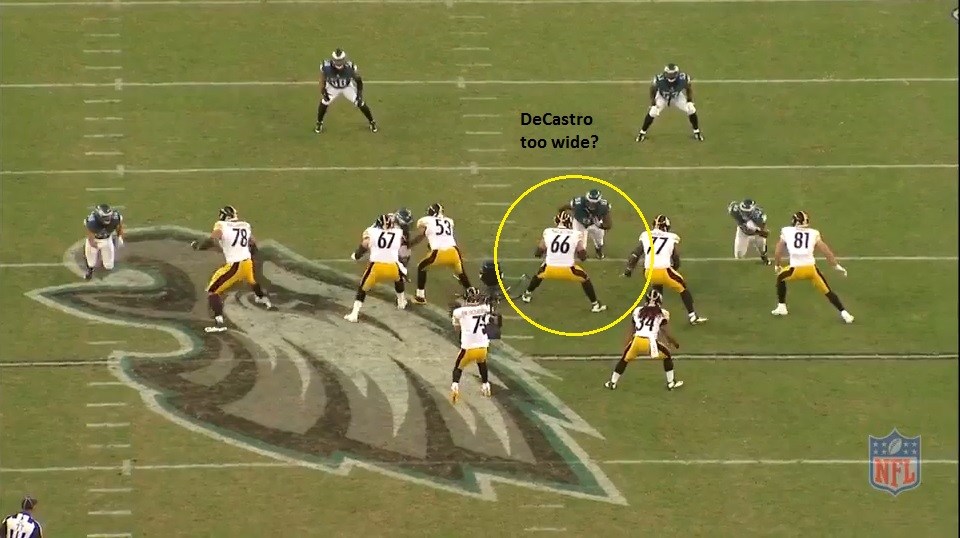 Larry Zierlein said there were too many ways to defend a bull rush, especially if you’re starting to lose the battle.

1. Maintain your stagger
2. Keep knees bent
3. Keep hands inside and drive up into the defender’s chest

I can’t see any glaring issues in these areas. He definitely keeps his stagger after the snap as he’s walked back and his knees are bent, at least, until the end when he does get uprighted but by then, the battle is over. His hands are inside though maybe he could’ve worked to reposition and strike again but hey, I’m not in his shoes fighting the battle against a 315 defensive tackle.

I did ask a friend/O-line guru Brandon Thorn what he thought went wrong.

“It looks like a slight false step out of his stance, and he couldn’t recover because his feet were even initially, which you never want. No power at all w/o a slight stagger”

So in laymen’s terms, for both of us, DeCastro just got straight up bullied. 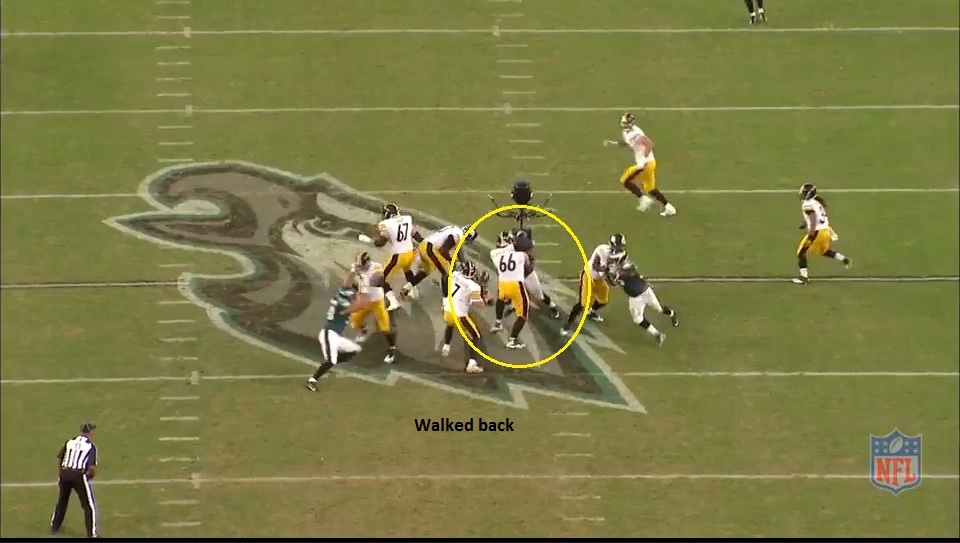 You’ll sense a theme here. All sacks happened against a four man rush. Again, the blame is easy to assign though the reason is a little more difficult.

Haley is again running his Indy Post and seemed to be pretty unsuccessful all day (another came on an overthrow to Jesse James).

It’s Marcus Gilbert getting beat by Brandon Graham off the edge. It seems like he isn’t getting enough width to defend the three step drop by Roethlisberger already five yards deep in the gun. 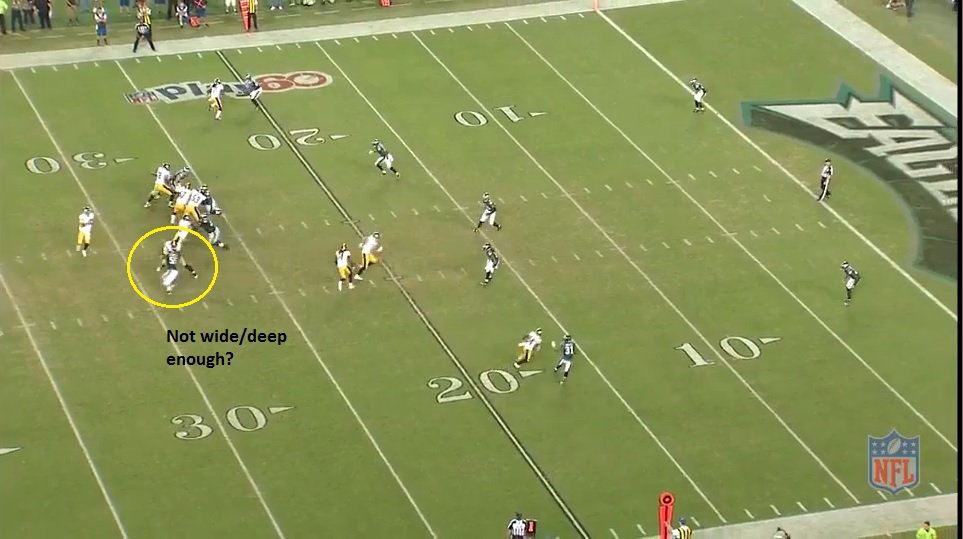 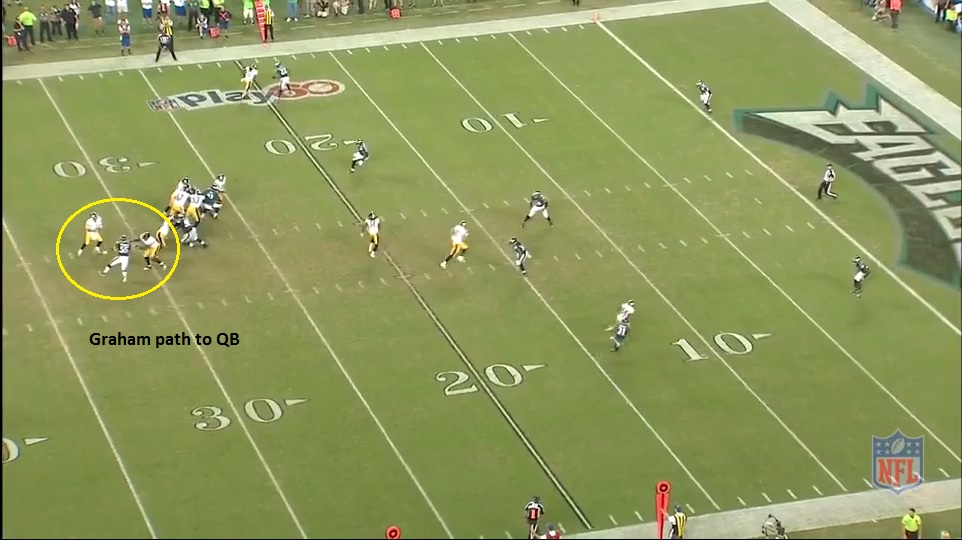 Graham is able to make initial contact and Gilbert never really gets square to him. He’s not oversetting, which is smart, the iside shoulder needs to be controlled most importantly (the DE is only as far upfield as his inside shoulder) but he doesn’t even get the depth/width to do that. 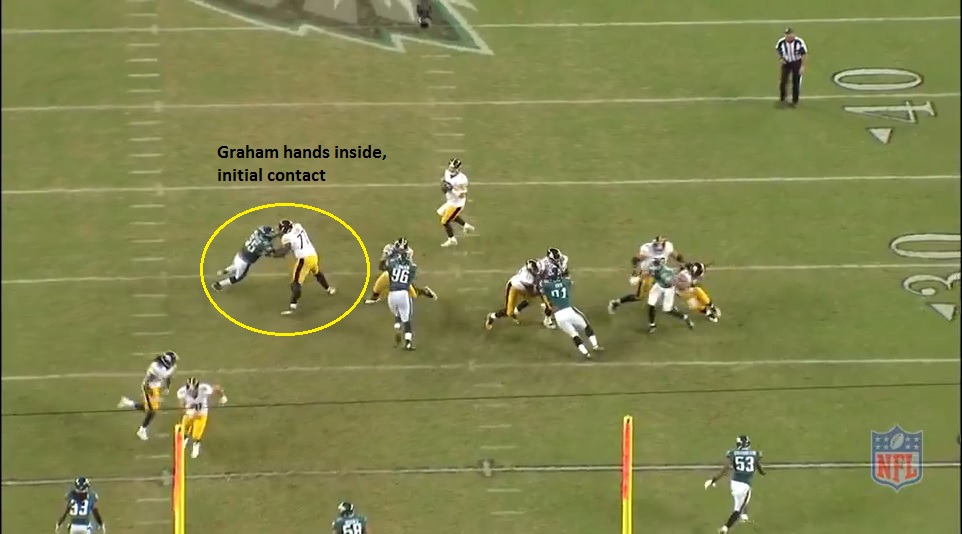 Graham rips through him and quickly takes Roethlisberger down.