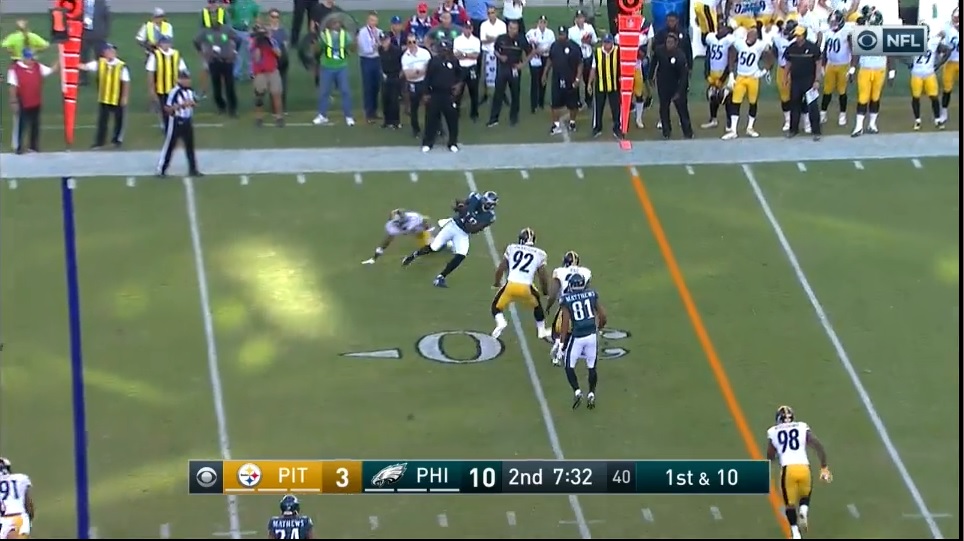 At this point of the season, there is no magic wand, no Excalibur’s sword, no secret potion to completely fix the Pittsburgh Steelers’ pass rush. You roll with what you have, tweak the system and scheme a bit, and cross your fingers.

That doesn’t mean changes can’t be made. They could, should, and hopefully, will.

We’ll explore the topic more throughout the week but based off our weekly charting we just conducted, one element sticks out. James Harrison isn’t seeing the field nearly enough. And if Pittsburgh wants to make an effort to generate some semblance of a pass rush, he’ll be starting this Sunday against Kansas City.

Last week, Harrison played just 21 snaps of a possible 65 – less than a third of the time. He sat out the entirety of the first two drives before finally seeing his first snap with 7:34 in the second quarter. It was a pass by Carson Wentz.

Harrison was asked to drop into coverage.

Wentz completed it for a 12 yard gain.

To be fair, it was Harrison who made that tackle, cleaning up for a whiff by Artie Burns. All four outside linebackers are going to be asked to drop into coverage and that was the only snap Harrison was asked to do so.

But the total numbers are far too low: 21 total snaps, 10 in the first half, and only 13 total on passing plays.

The Steelers have done their best to stick to an every-other-series rotation. But they’re arbitrarily choose to be flexible with it, choosing to have Arthur Moats and Jarvis Jones on the field for almost every snap of the first two drives before finally unleashing Harrison.

In the four snaps during the first two drives Jones sat out, the team decided to put in Anthony Chickillo at LOLB, shifting Moats to the right side, while Harrison remained on the bench.

Then the team became extremely inflexible with him. They stuck with playing Harrison every-other-series even when the Eagles ran just three and four plays on the fifth and seventh drives, ones Harrison played in.

On the season, Harrison has the third fewest total snaps, nearly 30 fewer than Moats and more than 60 fewer than Jones, and is in third place in rush opportunities. His coverage usage is by far the highest on the team. Here’s your breakdown.

And yet Harrison has as only one fewer QB pressure – two -than Moats or Jones. Moats had one off a bootleg on Sunday while one of Jones came on a stunt against Cincinnati and another, a win against a tight end versus the Eagles.

Both of Harrison’s came against Jason Peters, still one of the best tackles in the league.

This isn’t to say Harrison is doing a great job, no one is, but he’s inarguably still the best pass rushing outside linebacker on paper and the numbers do nothing to dissuade that opinion.

Yes, again, the scheme typically demands the ROLB drop into coverage more often, but given the need for some scheme change, this is a good place to start.

It doesn’t even ask to play Jones less. He’s been deemed versatile enough to play LOLB, meaning there will always be a space for him in this defense. If that means playing Chickillo even less, so be it. I don’t think many will be heartbroken over it.

Harrison is 38 – a young 38 – and the idea of limiting wear and tear is admirable, especially in case of a late season playoff push. Harrison did, after all, miss some time late in the year in 2014, and he’s good to bow out for a game because a knee injury each year. But at this point, to jump start this defense, the Steelers need to stop stubbornly gluing him to the bench and let him be the team’s best pass rusher.

This doesn’t serve as a cure-all but it’s a start. A step. And a step can mean all the difference in trying to get a sack.

Wouldn’t that be nice to see again.