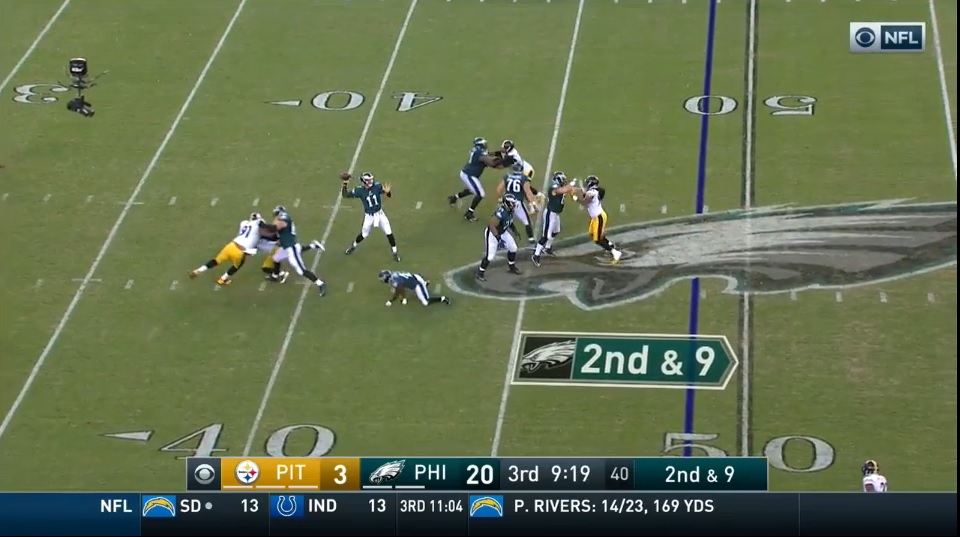 “Duck and cover and kiss your butt goodbye.”

That’s what Cory Matthews said in this back-to-the-past episode of Boy Meets World, pointing out the silliness of trying to protect yourself under a desk in the event of an atomic bomb. I bet Steelers’ Nation was uttering a similar line throughout the game, perhaps, adding in a few words not suitable for an after school special.

Yesterday’s theme was total failure. But specifically, the pass rush continued to be invisible for a third straight game. The question of its effectiveness was dismissed by the Pittsburgh Steelers this week, a, frankly, myopic viewpoint, blinded by the mere fact the team was winning.

But it’s been a problem. And is going to prevent this team from going as far as it wants to and, outside of that unit, quite capable of doing.

Now, I know tensions and tempers are running high after one of the worst losses the Steelers have suffered under Mike Tomlin. If not by play, then certainly in number, the largest margin of defeat in his tenure. The sky is not falling, the season not over, and I’m not going to sit in my perch – behind my keyboard – and start calling for anyone’s head after a Week Three loss.

These are the Steelers. Not the Buffalo Bills.

Then again, I’d sure love to have a guy like Jerry Hughes right now.

Back to the pass rush. It was Butler who responded to the elephant in the room, the lack of any pressure through the first two weeks, relatively dismissively. To take from what Matthew Marczi typed up Friday.

“We’re here to win games”, [Butler] said in his concluding remarks about a question about why the team isn’t getting the same sack numbers that they did last year. “We’d like to have the numbers that the hierarchy of the defense of the league has, but it’s worth more to me to win ball games.”

But sacks aren’t just a correlation to winning –  a random, meaningless number. They’re a causation. To ignore so, focusing just on the end result, is the same approach a teenager takes to defending texting and driving.

I’m fine. Nothing bad has happened yet.

Three games. One sack. And that sack, the loosest definition of the term, a tackle for no gain last week on a play where Arthur Moats dropped into coverage.

Sacks have been an official stat since 1982. Since then, and every year that’s followed, the Steelers have had at least two sacks in their first three games.

Except this year. Go look for yourself, courtesy of Pro Football Reference.

In years the Steelers went to the Super Bowl, the Steelers had no less than nine sacks in their first three games. In 2013, when the team finished 8-8, they had three sacks. In 2012, when they went 9-7, just five. Last year, when they nearly made it to the AFC Championship, they had nine.

And it doesn’t look like things are going to get a whole lot better.

That much doesn’t necessarily fall at Butler’s feet. It’s on the overall construction of the roster, created by Kevin Colbert and Mike Tomlin. Bud Dupree’s injury is out of their control but the rest of the group consists of a 38 year old, a lower-tier free agent, and a failed first round pick. Even with the Steelers hitting Barry Bonds’ sized home runs on Cam Heyward and Stephon Tuitt – who, no, aren’t playing up to par – the outside linebackers are the heart and soul of the pass rush.

And I don’t know when the last time was the Steelers trotted out a group that has struggled so much. They Steelers figured out a way for Clark Haggans to rack up nine sacks. Fans would kill for Jason Worilds-like numbers of 7-8 sacks.

We can get into the X’s and O’s, you know I love to, and talk about how often the outside linebackers are dropping into coverage (a lot), the talented tackles they’ve faced (they have), and optimism over Dupree’s return (fingers crossed).

But the bottom line is the Steelers don’t win without a constant source of pressure. Most teams don’t. And when you’re the worst at it, as the Steelers are with their one sack, it’s hard to imagine going far, even bolstered by a potent offense.

Because there are games, like the one we saw yesterday, where the offense won’t be there to have your back, and when the defense is going to have to pick up the slack. Or a shootout where the defense needs one more stop, one big play to secure the victory. And I’m not confident the Steelers can get that.

This isn’t even just about the Eagles game. Pass rush alone is far from the reason why the Steelers got dismantled. It was failure in every direction. It was a worry before the season, even with a seemingly just temporarily injured Dupree and then the chief concern following the news he was headed to IR. I literally wrote that his loss, “threatened the defense’s success,” which is not a I-told-you-so reminder but a word of caution this isn’t a knee-jerk reaction to a temporary loss.

Injuries, in part, played a role yesterday. Those names will return. Will the pass rush?

The problem isn’t just that there is a problem. No roster is perfect, not every unit spotless. There’s always a weak link. But the position it’s happening to is the most important one on this defense.

It’s isn’t buying a car without an air conditioner. It’s buying one without an engine. A problem that can’t be overlooked, no matter what how cool the paint looks and how much the rims glisten in the sun.

If this team doesn’t achieve its goals, aka win a Super Bowl, you can point back to one group, above all, for being the reason. One that will be addressed in the offseason, probably with a first round pick.

Next year. Maybe it’ll work out.

It’s just the type of problem the Steelers don’t usually kick down the road.