The Pittsburgh Steelers were able to come away with a victory over the Cincinnati Bengals just a short while ago by a margin of 24-16, allowing the opposing offense to score only 16 points for the second straight week.

In both instances, however, the defense yielded more and more in the second half, and the bending almost led to a breaking in the Steelers’ home opener. And it may have, if not for some questionable decisions made by the officiating crew, and one that the Bengals themselves exacerbated.

Late in the third quarter, the Bengals looked to end a long 10-play drive with a touchdown that would have made it a 17-14 game with over a quarter to play. On second and goal from the three, Andy Dalton fired a pass to C.J. Uzomah toward the back of the end zone, going up and grabbing it.

Strong safety Robert Golden was in the area, however, and forced Uzomah out of bounds. The officials ruled that he landed out of bounds prior to establishing himself inside the end zone, resulting in an incompletion, but reviews, to me at least, suggested that Uzomah’s knee at least came down first inbounds and that it should have been a reception and a touchdown.

The Bengals chose not to challenge the ruling, and instead ran their third-down play, with Dalton throwing back in Uzomah’s direction while under pressure, incomplete. They settled for a field goal, and the whole affair resulted in a potential four-point swing in the end.

The bigger issue, however, came on Cincinnati’s penultimate drive, after an eight-play touchdown drive that made it a one-possession game. After three straight completions for nine, 10, and then 17 yards brought the Bengals to the Steelers’ 39 just on the other side of the two-minute warning, Dalton connected with Pitt rookie wide receiver Tyler Boyd over the middle for six.

But he was met there by James Harrison, who jarred the ball loose, scooped up and returned by Golden for 21 yards. Replays strongly indicate that Boyd’s knee was already on the ground for a fair amount of time before he actually lost control of the football.

Pete Morelli, however, whom Dean Blandino said would “be a presence early”, went under the booth to review the fumble that they let stand and concluded that there was not enough indisputable evidence to overturn the ruling on the field.

I personally felt that there was enough substantial evidence to reverse the call, and had the Steelers been on the other end of that play, I certainly would have been frustrated with the decision. But the rule will go down in the record books as is, and is, officially, what happened—a forced fumble by James Harrison, after he may have been the beneficiary of a generous determination of an interception the week before.

Either of these calls could have had an impact on the way in which the last 18 minutes of the game unfolded, but as it did, it resulted in a second straight victory for Pittsburgh on a day in which the offense struggled through much of the game, and they stand atop the AFC North standings along with the Ravens.

A lot of you are asking about the fumble at the end of Bengals/Steelers game.

Here are my thoughts pic.twitter.com/ezLmazRfUc

Below are some still frames from multiple angles, some in sequence, that certainly seem to indicate that Harrison contacted Boyd with parts of his body other than his right knee, which is what jarred the ball loose, both before and after Boyd’s knee was on the ground, but before Harrison’s knee hit Boyd’s arm. 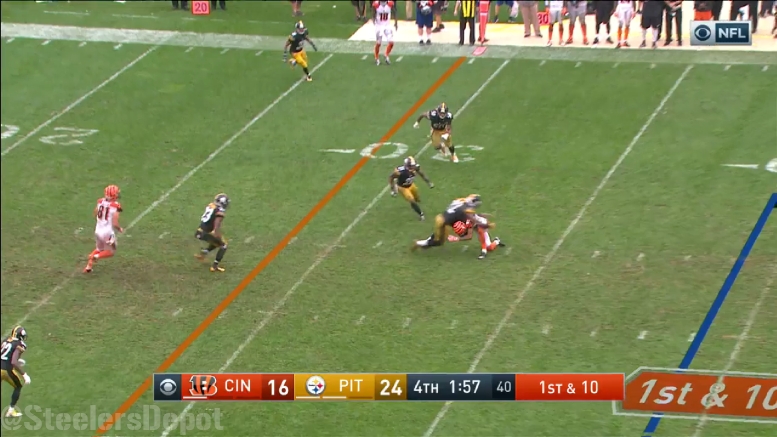 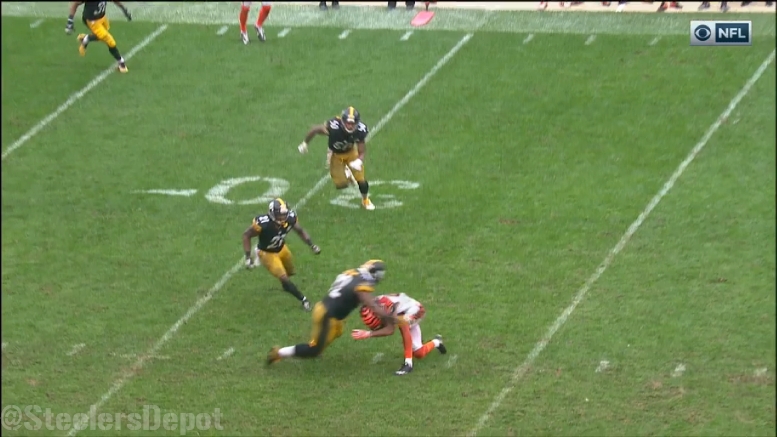 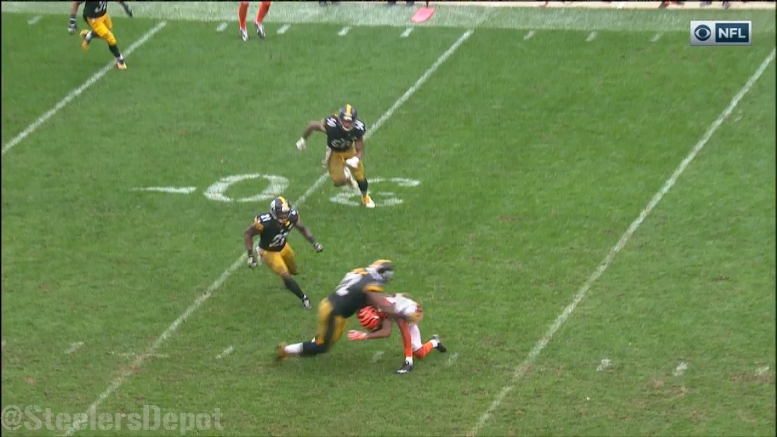 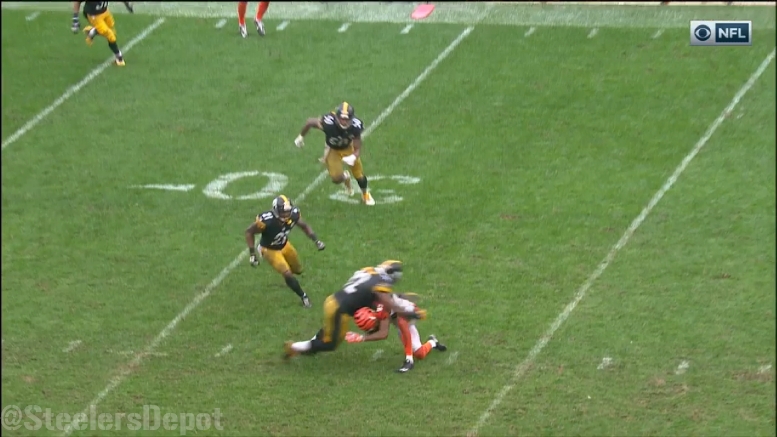 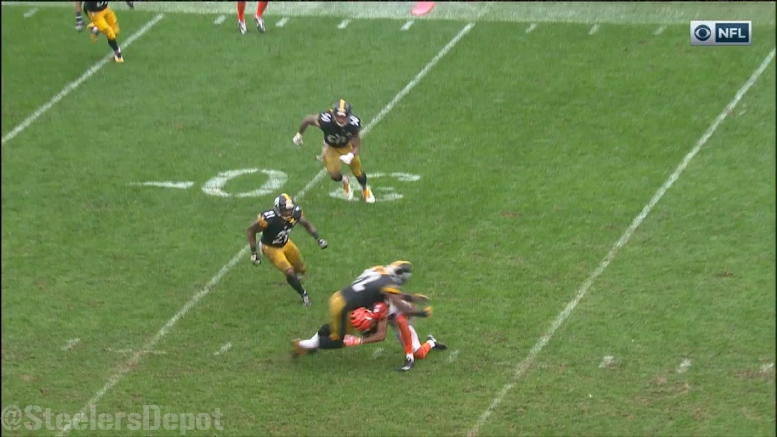 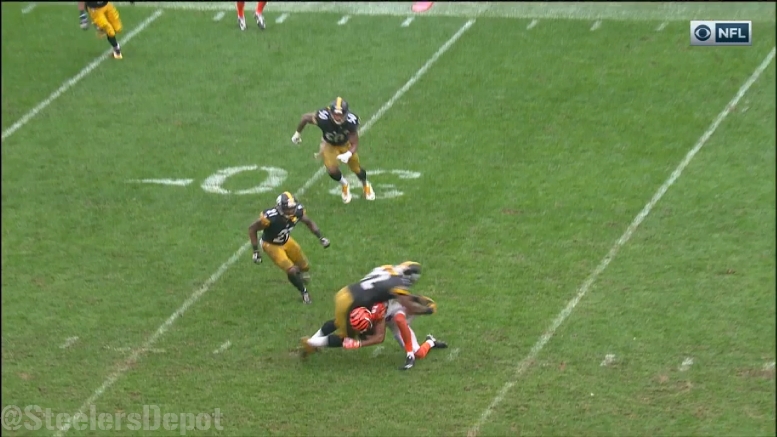 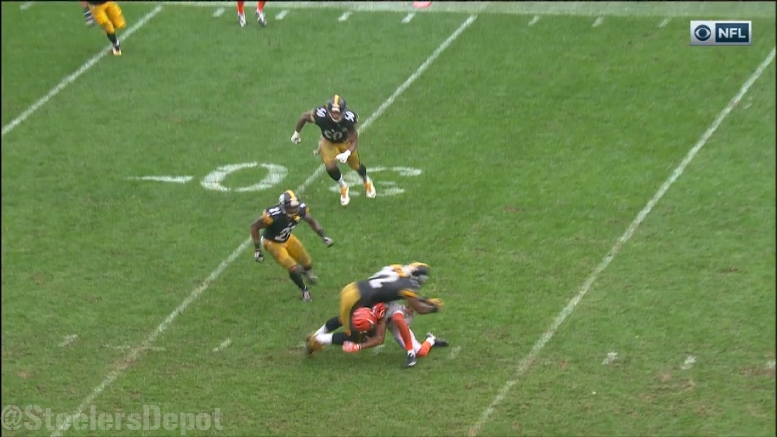 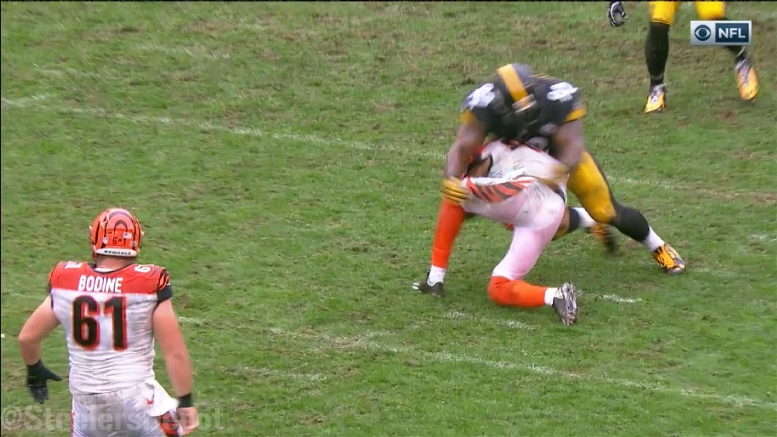 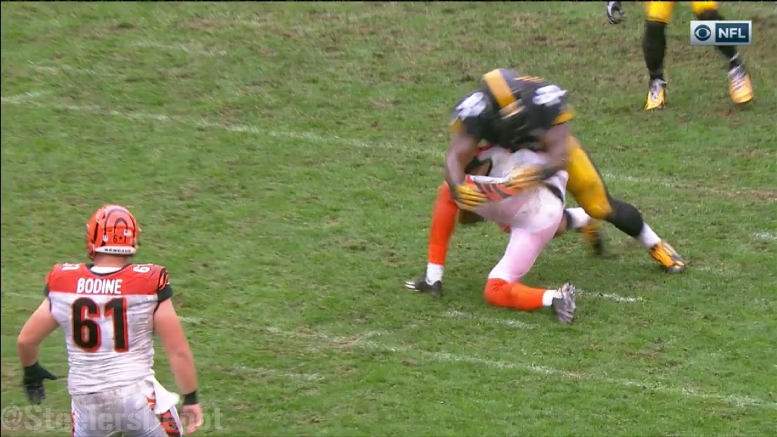 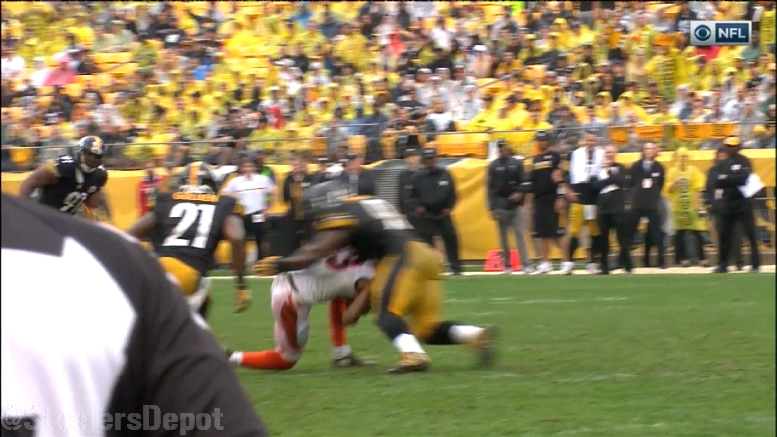 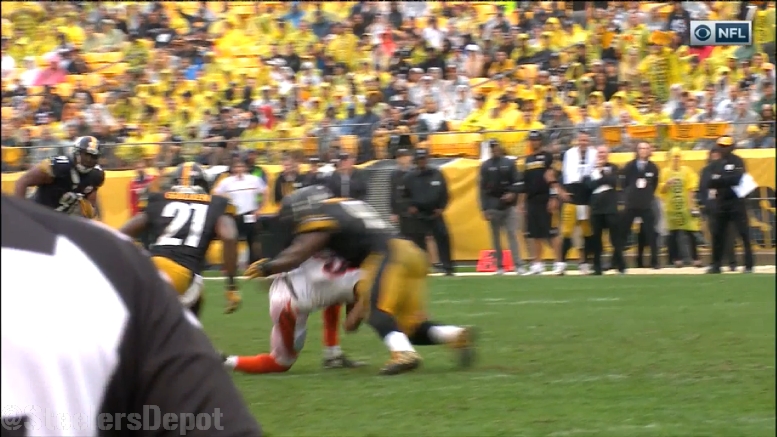 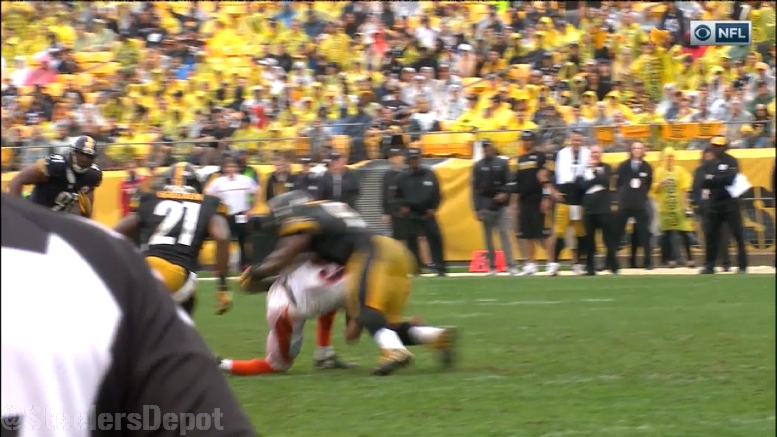