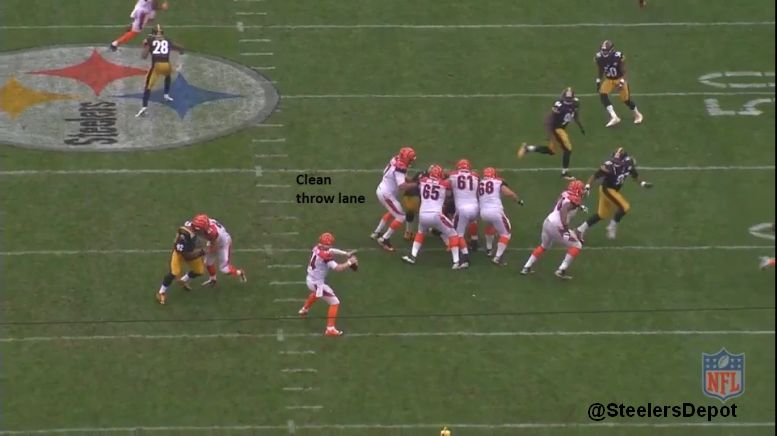 Through three weeks, you’d be hard pressed to find a Pittsburgh Steelers’ fan who wouldn’t say pass rush is the biggest issue facing this team the rest of the year. One sack in three games, dead last in the league, with every other team having at least three. This, despite Pittsburgh having the fifth most attempts against them in large part to two games where the Steelers played with the lead throughout.

We’ve said it during the week. There’s no magical solution. This team isn’t hitting the 48 sack mark they did last year. But that doesn’t mean it can’t or won’t be improved.

I am, obviously, judging this from 30,000 feet up and as always should be implied, don’t have a concrete understanding of what the team is trying, doing, and the rationale behind. But from this view, let’s diagnose some of the problems and some solutions that I would like to see.

Before we do that, to address a solution, you have to diagnose the current situation and all the available information. So let’s break down who the best and worst pass rushers are, individual strengths and weaknesses, and general alignment.

Initial Get Off
Abiilty/Experience out of 3 point stance

Does not have elite strength
Struggles on Bull/POA

Trouble staying on feet
Average to below average athlete
No threat around the edge
Easy to gameplan for, wins in limited ways

Ok, let’s get to some of the problems the pass rush has had across the board during the first three weeks.

– Stephon Tuitt/Cam Heyward are being used too often as contain rushers, not letting them get after the QB.

This isn’t outside the norm for the Steelers. In several of the sub-packages, when the outside linebackers start moving around, at least one end becomes a contain rush. Because even scheming up blitzes, rush integrity and balance are critical. Lose that and you give the QB an easy escape lane.

So when the Steelers shift their DL, have one (usually Heyward) line up at the nose, the other lines up as the five tech away from the OLB side, giving him contain principles to the away side. His number one goal is not to get after the QB. It’s to create a barrier to maintain the balance of the rush. 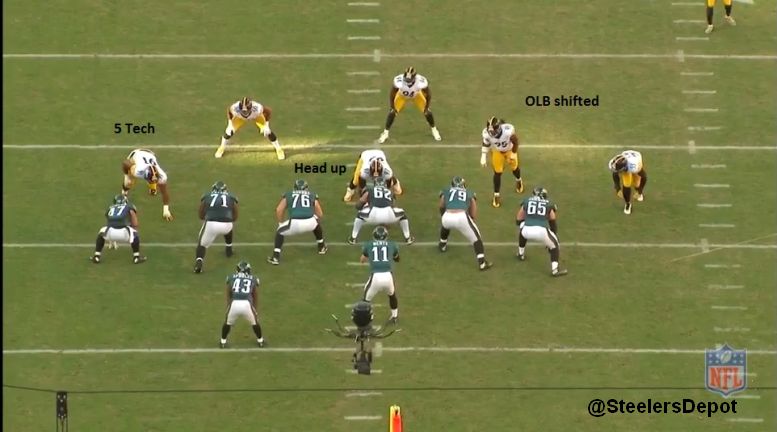 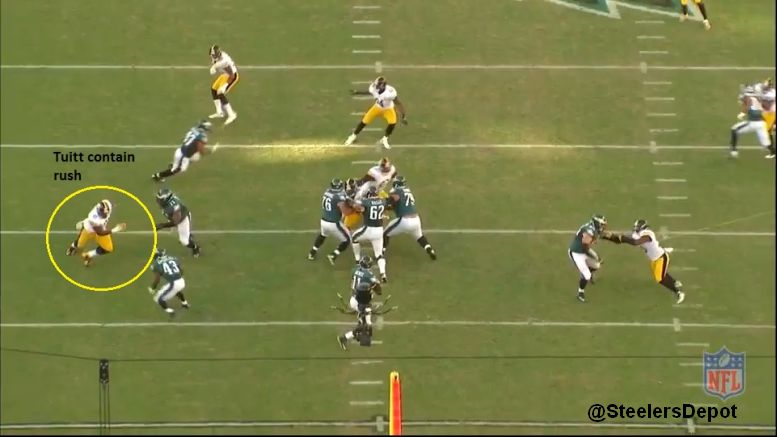 When the other guys are able to get home, there’s not much of an issue. It’s part of the scheme, part of the role, and doesn’t happen all the time. But when the rush and pressure is so infrequent, asking them to do this 5-7 times a game limits their chances that much more.

It should be Jarvis Jones and Arthur Moats handling any contain rushes. They’re less skilled pass rushers and are better athletes anyway if the QB tries to get out on the perimeter.

Let Tuitt and Heyward be pure pass rushers who can collapse the pocket. Even if the rush doesn’t get home, it could create some difficult throwing lanes and adjust the QB to move his launch spot. Like this one against the Eagles a week ago. Tuitt doesn’t get to Carson Wentz – he actually ends up grabbing his facemask – but he collapses the pocket. That’s something the OLBs aren’t going to be able to do. 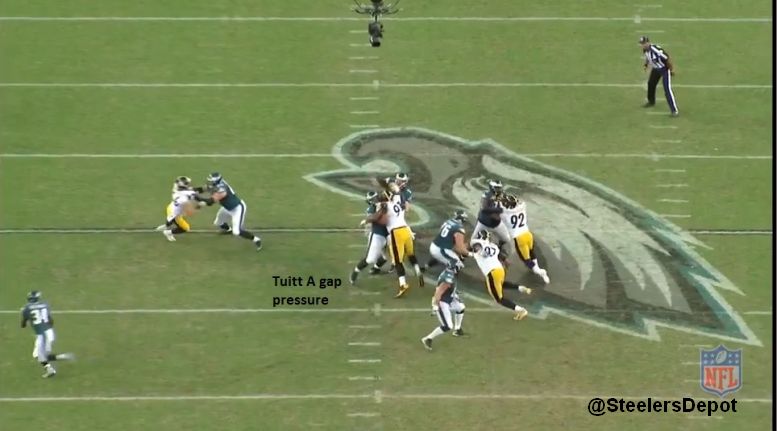 – Butler is attempting to be creative with his OLBs and four man pressures to vary looks and put his edge players in better positions, but it has failed to work.

This is an extension off the last point. Again, not that uncommon with the Steelers, but to start the year, Butler has been trying to move his OLBs and get them away from LTs, off the line of scrimmage, and often, lining them up as a 10-30 tech. That helps create flexibility in blitzes and coverages while creating floating alignments for the interior line to deal with, a linebacker shifting and inserting himself into different gaps.

Here’s a look, similar to what we saw above. 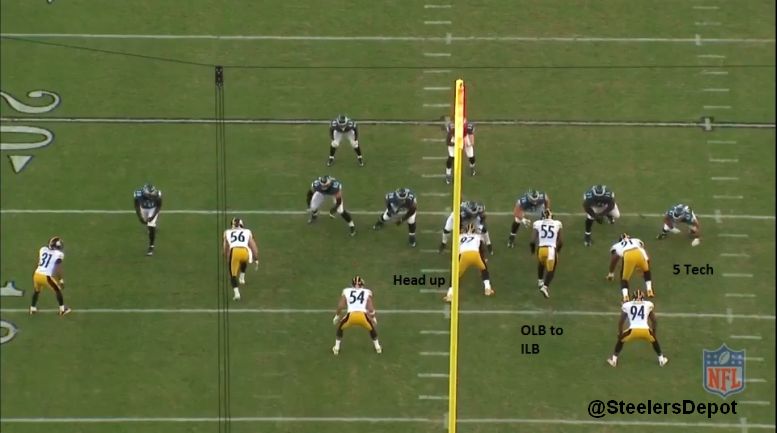 It’s not a bad idea in theory but in practice, it isn’t working. Too often, it’s easy to pick up what the look will. It’s rare for an off ball OLB to rush straight ahead but instead, be part of a stunt.

Against the Eagles, this happened four times. A four man pressure with the outside linebacker coming off ball over the middle. A look at a rush that didn’t generate pressure. 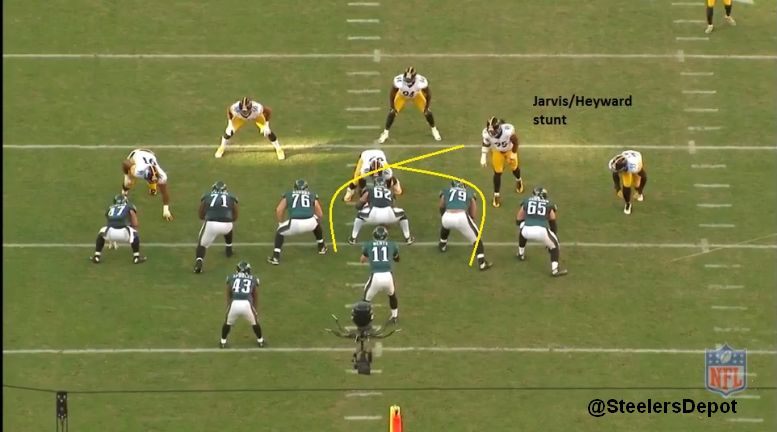 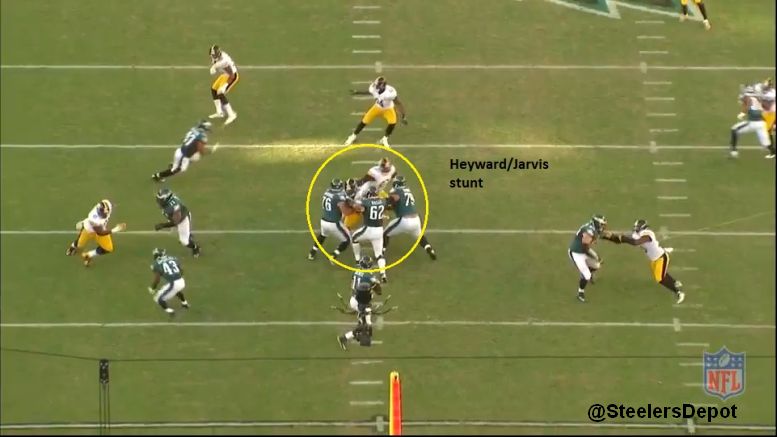 These OLBs, the Moats/Jones, don’t have the strength to bull – which you wouldn’t expect – but don’t have the athleticism and hand fight to shed someone one on one. Heck, Vince Williams did a better job at it in his lone chance Sunday.

This was, as you’ll notice, a five man pressure that nearly got home and the pass landed incomplete.

If anything, run these blitzes with Williams, Lawrence Timmons, or Ryan Shazier. In a vacuum, they’re all better pass rushers up the middle than Jones or Arthur Moats.

So these linebackers usually stunt, taking time, and losing the effectiveness of the surprise. When the line knows to look for work, they’ll pick anything up.

If anything, the Steelers need to get back to what they usually do in that DL shift. Many times last year, they’d line up both OLBs to the away side of the shift and send four to five man pressure, either overloading one side or dropping that side and sending pressure to the shift.  Just like they did here with Moats, Bud Dupree, and William Gay rushing. 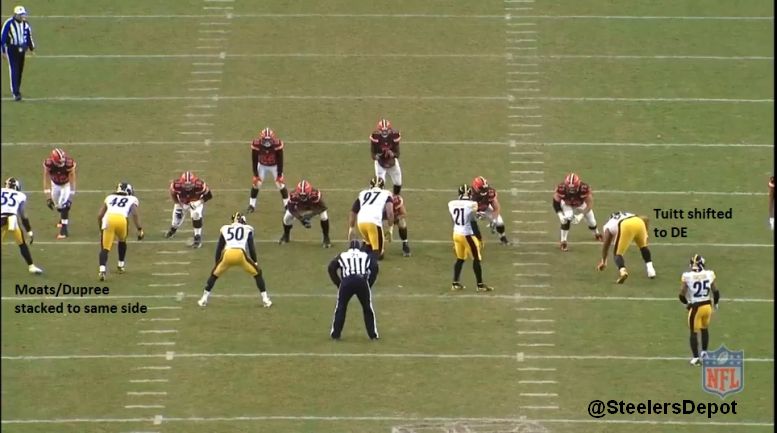 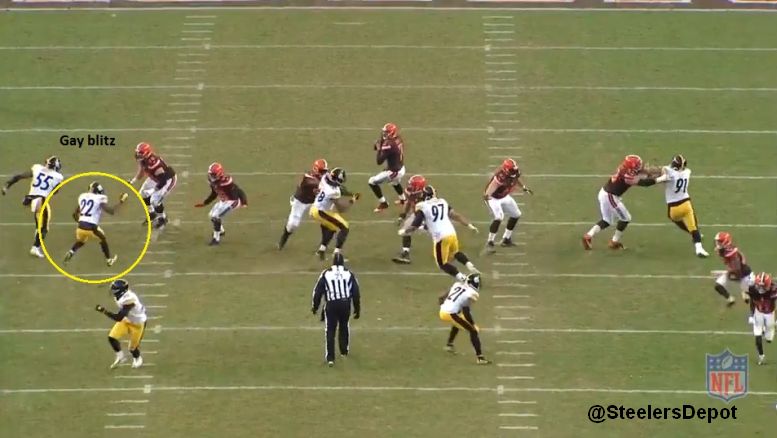 That’s when it makes sense to use an end as a contain player because you’re sending pressure that is hoping to get home. On a four man rush? It’s much less likely.

I can get why they’re doing it, the goal is to get pressure with a four man rush and they’re exploring different looks to accomplish that because the straight rush hasn’t worked, but this isn’t any more effective. If anything, it’s less.

This one, we’ve already talked about. We’ve written about the success five man pressures have had this year, and with a larger sample size, all of last year.

Only 14 times of a 5+ man blitz and only ten instances of a DB coming. Numbers are way, way down in both aspects even if the overall blitz number is only a little below average.

We went through the Keith Butler playbook right before the year started. It was a dizzying array of fire zone blitzes that he seemingly carried over from Dick LeBeau (and are definitely still in the playbook from what I saw day-to-day during training camp).

What happened to the Fire X? His Scar Fire Zone? Thunder, Frisco, Triple Inside Fire Zone? Hardly a peep of it. He had to manufacture pressure last year and now that he’s stopped, the pressure is gone. It’s no surprise.

What Butler has attempted to do is stunt a lot with a four man rush. Again, that’s not a terrible idea, and occasionally, it has worked (Jarvis Jones against the Bengals Week Two in the red zone). But the Steelers have struggled with their spacing, and overall rush lane integrity, creating too many spotless throwing lanes for quarterbacks. Easy sight lines that not only leave the quarterback all alone and simulating a 7 on 7 drill. 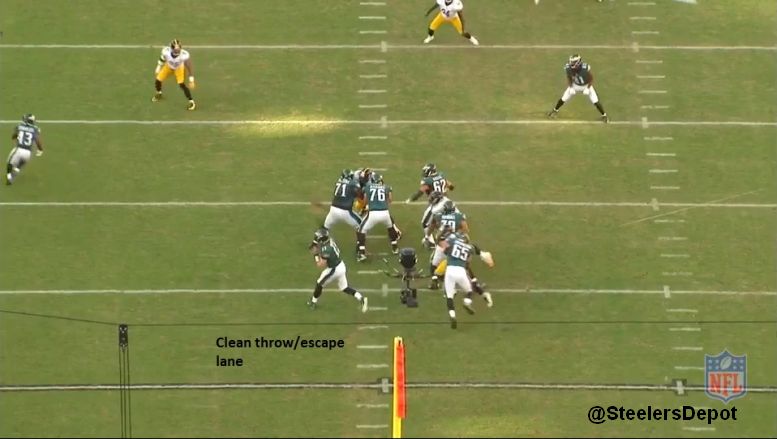 I don’t know why it’s been such an issue this year but it has and you’ve ended up with results like these. This next one is the worst of all. Absolutely zero spacing on the stunt. 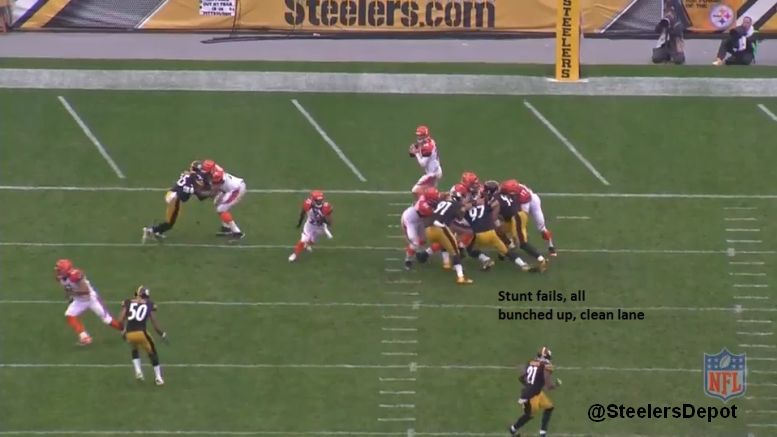 Until that at least gets fixed, I’d rather see more slanting (like you get on fire zones) where players aren’t trying to cross over each other, like this fire zone from last season.

To recap and summarize:

1. Less contain rushes with your best pass rushers (Tuitt/Heyward)
2. Get the OLBs on the edges, not off ball
3. Increase five man and DB rushes/blitzes
4. Limit and simplify stunts until spacing becomes better with reps

It’s not going to make the Steelers pass rush great, and I totally get any change has its own set of unintended consequences, but it’s clear something needs to be shaken up.