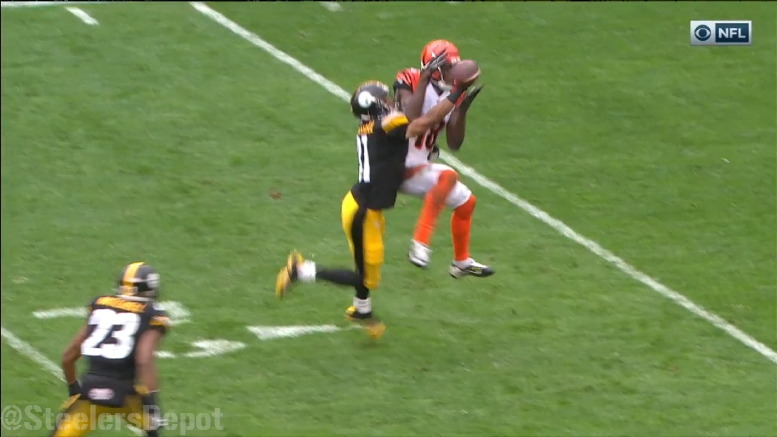 If there is one thing that can be said about every NFL season, it is that every one of them is consistently full of surprises, with things occurring that nobody predicted would happen—at least, nobody with an educated opinion not pulling a projection out of a hat.

We have been treated to a number of surprises heading into the 2016 season already, such as the performance of a pair of rookie quarterbacks, the improvement of the Giants’ last-ranked defense from a year ago, and any variety of players or groups exceeding or failing to live up to their respective expectations.

One group that seems to be playing above its expectations this season is the Pittsburgh Steelers’ defensive backfield, at least if ESPN writer Jeremy Fowler, who covers the team, is to be believed. And after the way third-year cornerback Ross Cockrell handled Bengals All-Pro wide receiver A.J. Green, I do think it would qualify as a surprise. He writes:

We’ve been hard on the Steelers’ pass defense in this space, but the defensive backfield deserves props here. Holding the Bengals to one touchdown and wide receiver A.J. Green to 38 yards is progress. The Steelers have one sack in two games, yet the coverage has held up. Ross Cockrell is making a move into stardom, and the addition of former special-teamer Robert Golden into a starting safety spot has paid dividends thus far. The Steelers have been effective in a third-down dime package with safety Mike Mitchell directing traffic on the back end. This group looks more cohesive than it did a year ago.

While it is true that the Steelers rank 31st in the league right now by surrendering 347.5 yards per game through the air after big performances in the passing game from Washington and Cincinnati, a deeper look at the statistics do indicate some degree of improvement.

There is the fact that the Steelers defense has faced 97 pass attempts against them through two games, which is second only to the 98 pass attempts that the Chargers have seen. In reality, the defense is only allowing 7.2 yards per pass attempt, which ranks 16th in the league.

In addition, they have allowed just one touchdown pass through two games—and two touchdowns in total, after two very impressive performances in the red zone—and even that touchdown had little to do with coverage, as it was the product of missed tackles following a dump-off pass to the running back, which was mostly yards after the catch.

Of the Steelers’ top six defensive backs, the group has already recorded eight passes defensed, including one that saved a touchdown courtesy of their rookie first-round cornerback, Artie Burns, though none of them have come down with an interception yet.

Of course, the secondary is still very much a work in progress, which includes two rookies and a pair of first-year starters in the mix, but the early returns, when you look past the bulk yardage numbers, have been positive.