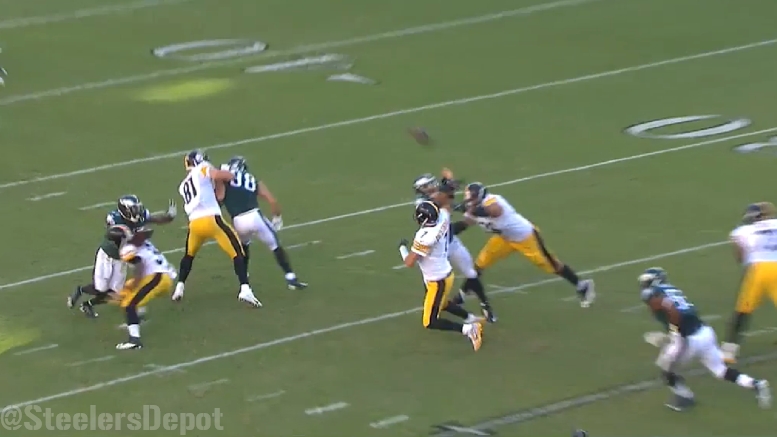 This is not something that often gets talked about, and usually that’s because it is typically not an issue. But even when it is, there is a large segment not just of fans, but those among the media who cover the team, who will dismiss whenever Pittsburgh Steelers quarterback Ben Roethlisberger is as much part of the problem as he is the solution.

Of course, whatever solution there may be, Roethlisberger will inevitably be part of it. But he also had to play better than he has so far this season, particularly in the last two games, and especially, of course, yesterday evening.

Setting aside the fact that the offense as a whole put up just three points for an entire 60 minutes—and yes, Roethlisberger is far from wholly to blame for the low score, as he should have had a touchdown pass on the opening drive if not for a dropped pass—the quarterback play has not been at the level that it needs to be for this to be a championship team.

Roethlisberger will be the first to admit this, but of course he is about as willing as anybody has ever been to say that he needs to play better, even when he wins and performs excellently. But in many ways, though it sounds counterintuitive, some of the issues that he has had this season have been turned aside in favor of the fact that he was still recording touchdown passes and the Steelers were still getting wins.

Yesterday, Roethlisberger didn’t have any touchdowns passes, nor did the Steelers win—in fact, they could hardly have been further away from winning. And his numbers have declined thus far with each game—again, not entirely due to his own performance, but he obviously has played a role.

For two games now, Roethlisberger’s completion percentage has been below 55 percent, for starters. He has completed just 43 of 81 passes over a two-week span, and is averaging just 6.4 yards per pass attempt, without factoring in the yards lost and extra dropbacks including in the five sacks he has taken for a loss of 44 yards.

Roethlisberger has been somewhat unfortunate this season on some of his interceptions, and one might be inclined to include in that discussion the one that he threw today late in the game that appeared to be a simultaneous catch situation. Regardless, it was a 50/50 ball.

This ignores the many passes that could or should have been intercepted throughout not just today, or even last week, but going back to the first week. The second touchdown of the season could well have been an interception instead.

This is by no means ‘calling’ Roethlisberger out or suggesting that he is not an excellent quarterback, but rather simply saying that he is not playing up to his capabilities at the moment, and that the Steelers are going to need him to in order to take the team where they would hope to be by the end of the season.