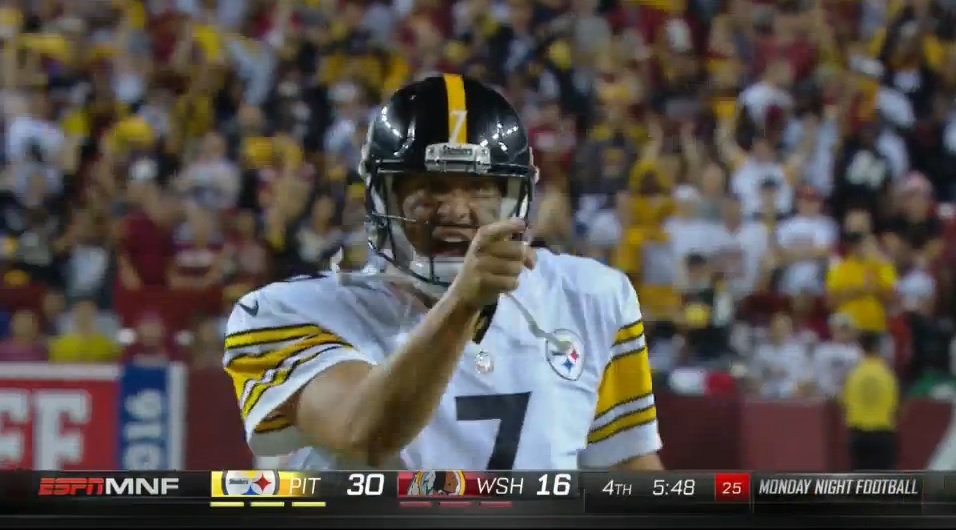 The atmosphere was relaxed, a little carefree. The Pittsburgh Steelers were up 24-9, dominating the second half of their eventual Monday night win.

But Kirk Cousins woke up, led Washington down the field, and capped it off with a touchdown, edging the deficit to just eight, 24-16.

I’m not completely positive what the vibe among Steelers’ Nation was but I can promise you it wasn’t good. Been down that road before and it doesn’t always end well.

Then the Steelers answered. A big drive of their own with the final nail coming from DeAngelo Williams, a 33 year old running back, shimmying his way into the end zone to put the Steelers comfortably ahead for good.

We know the what. But the how? Let’s take a look. It isn’t often we dissect run plays immediately after a game; usually it’s a big pass play or defensive concept. But this was drawn up and executed beautifully. It’s too pretty to put anything else ahead of it.

The key pieces to this play come from all different points of their career. Williams, towards the end but still playing at an absurdly high level. David DeCastro, in his prime and just days removed from signing a mega-contract. And Sammie Coates, a second year player looking to emerge. There’s something beautiful about that. Three distinctly different points of a career all converging on one play with one common goal.

Here’s the look. A trap block from a shotgun, one-back set, right guard DeCastro pulling across the formation. 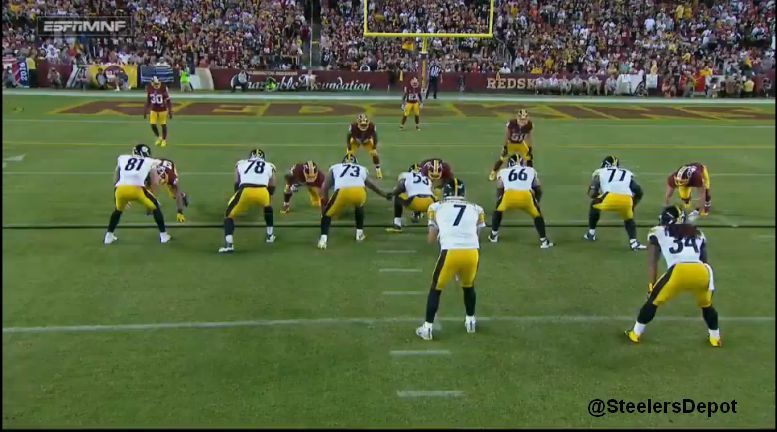 Let’s draw it up on paper first with each role designated.

On any trap block, someone pulling, you get two elements. Down blocks to the frontside, the direction the run is going, and a back block to replace the pulling guard. That’s the big worry there. Pulling a guard creates space, room for the defense to penetrate, and that can ruin a play, especially more slow-developing ones like counters and power schemes.

The alignment of the RDE is key here. Like we wrote, the frontside of the line is looking to execute down blocks – seal their man inside as the puller wraps around. But you can’t allow penetration either. You have to squeeze and wash your defender or else he’ll get penetration, force the puller wide, and blow the whole play up.

Again, the pre-snap look with each assignment drawn up. 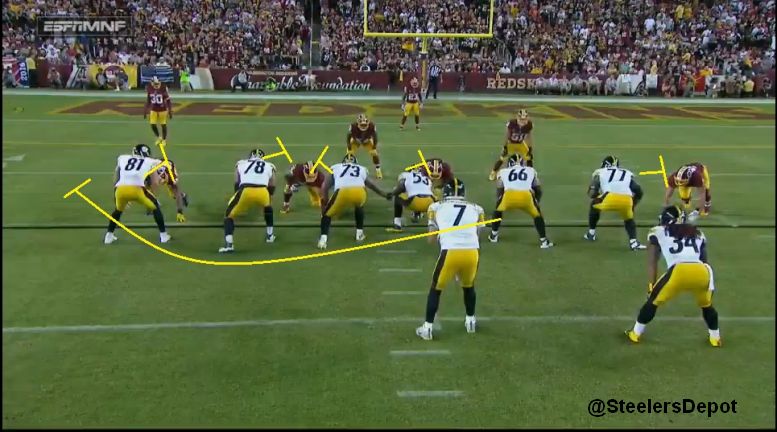 Washington’s run gaps make this easy for Jesse James, responsible for sealing the RDE, and Alejandro Villanueva/Ramon Foster, asked to double the nose, a common element of a trap block and crucial element to the play.

The RDE spikes inside and the RDT seems to stunt over the one tech, taking them out of the play. 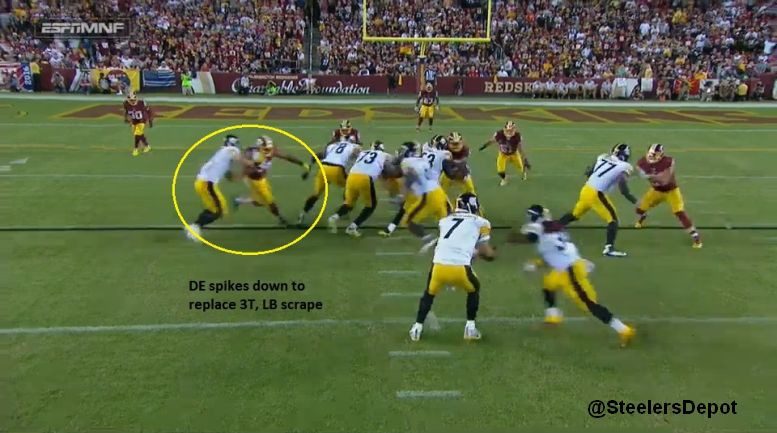 Every run has a force defender, someone with the intention of making the ball go back inside to his help. Here, linebacker Mason Foster – #54 – scrapes over the tackle and end, responsible for being the force defender.

But DeCastro pulls and is able to log, seal him inside, and keep the edge open. That’s a big element to the play. Now Williams is on the perimeter and facing much easier run defenders than linemen and linebackers with the benefit of playing in space. 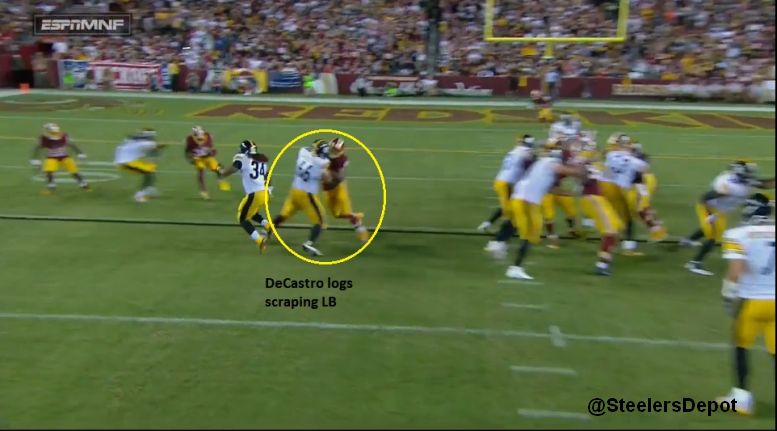 The other element is Coates. And to understand his role, we have to understand a very basic rule for receivers in the run game. Written about it before but needs repeated here.

This forces the defense to replace the safety with the only unblocked defender, the cornerback. And that’s a matchup offenses will take everytime. Cornerbacks are rarely as physical and capable against the run as safeties.

So when Coates sees safety David Bruton creeping down, Coates digs him out. It isn’t a monster shot but it’s enough and a detail play from the receiver, doing the grunt work to help his team. You can see it from the live shot here. 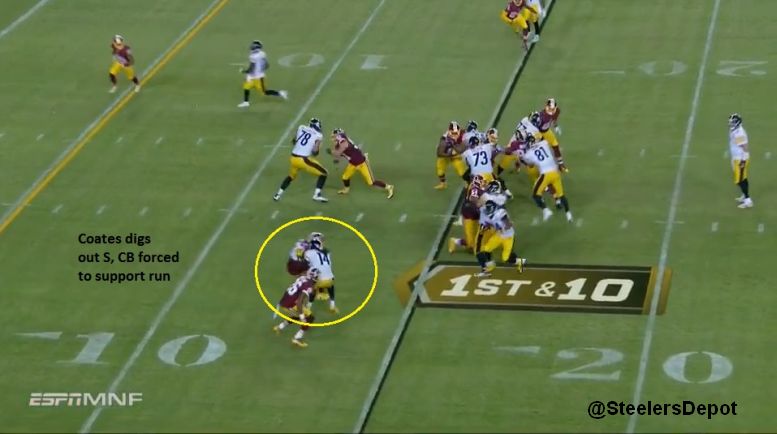 That puts Williams against the cornerback, Bashaud Breeland, and he hits him with a nasty juke, getting the corner out of control and no longer under balance. Falling forward, toes over shoulders, unable to do anything but watch Williams scoot past. 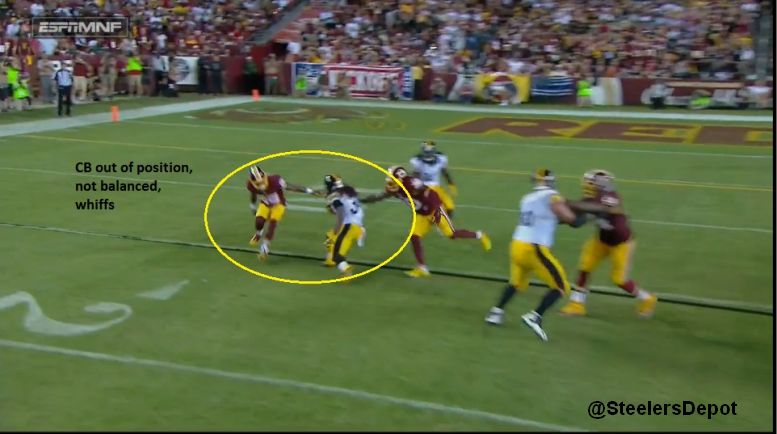 Ben Roethlisberger was quick to notice the Coates’ effort, with the finger point of approval and an audible “Nice job!” which you can see in this GIF below.

A nice job indeed. That’s an offense working as a unit, being extremely detailed in their work, and taking advantage by making a big play.

It’s awfully impressive, especially for Week One. Fitting for an impressive win.