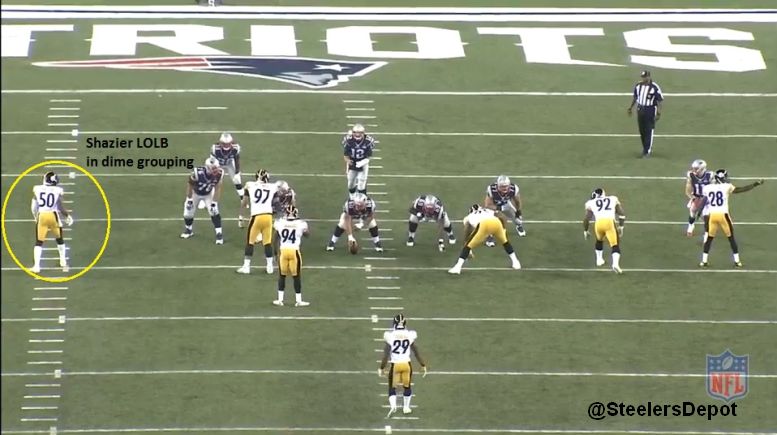 The loss of Bud Dupree for the first half of the season, as I wrote about last night, threatens to hamper the Pittsburgh Steelers’ pass rush and by extension, the entire defense.

The majority of the time, the team will rely on Jarvis Jones, Arthur Moats, James Harrison, and to some lesser degree, Anthony Chickillo, along with their dizzying compliment of fire zones.

But another component will involve playing some inside linebackers on the outside, kicking the outside guys inside. That wrinkle certainly isn’t new to Keith Butler. Let’s break down a couple of examples.

Ryan Shazier is the player most likely and often to kick outside. He played on the outside a whopping 111 times last season, or 16.3% of his total snaps. That came basically exclusively in sub-packages, as you could’ve already surmised, though it didn’t happen in just third and long situations like you – and even I before checking the numbers – thought.

Ok, let’s show some of these looks. The very first one of the season came in at the end of the first quarter against the New England Patriots. The Steelers are in dime, their 2-3-6 front, so no one gets kicked inside. But they actually removed Bud Dupree from the field entirely and replaced him with Shazier at LOLB.

From there, it’s a standard four man rush. Nothing special going on.

Often with some of these sub-package wrinkles is a shift in the defensive front. Because of some of the stacking and re-aligning Butler does, he has to ensure the rush still has balance, the operative word to any scheme. If there is no rush lane balance, if you leave wide escape lanes, the quarterback has an outlet to escape. Constrict, constraint, sack.

In a lot of these looks, the defensive line will shift away from the stack. Instead of a traditional one and three tech, the Steelers will place on end head up over center and the other to the 4i/5T, like in this example below against Kansas City. 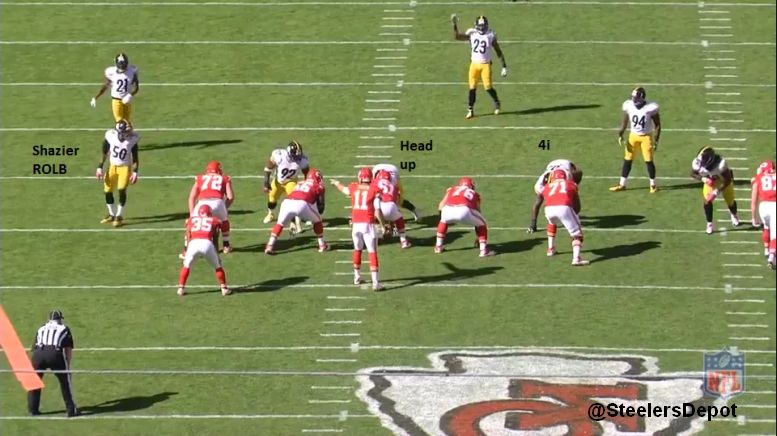 And you get a straight-up five man rush out of it, every gap occupied so Alex Smith doesn’t have an escape lane. 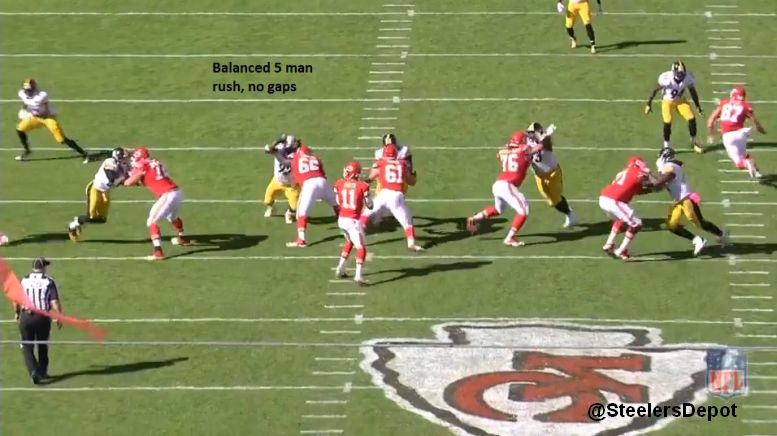 The Steelers will also do this when they stack their outside linebackers, making the awayside defensive end the true contain player. 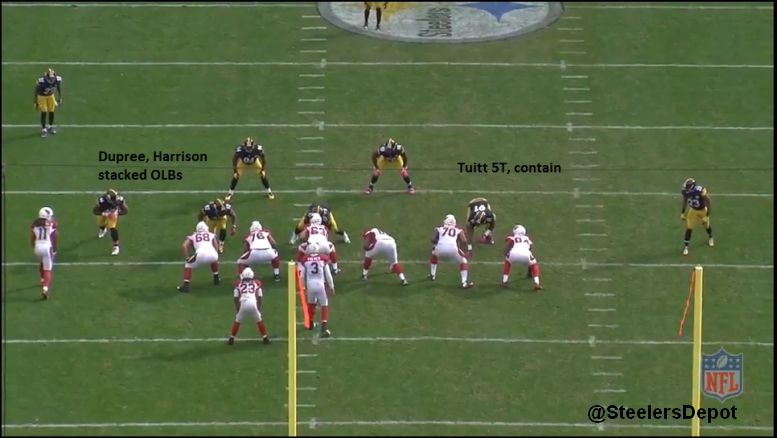 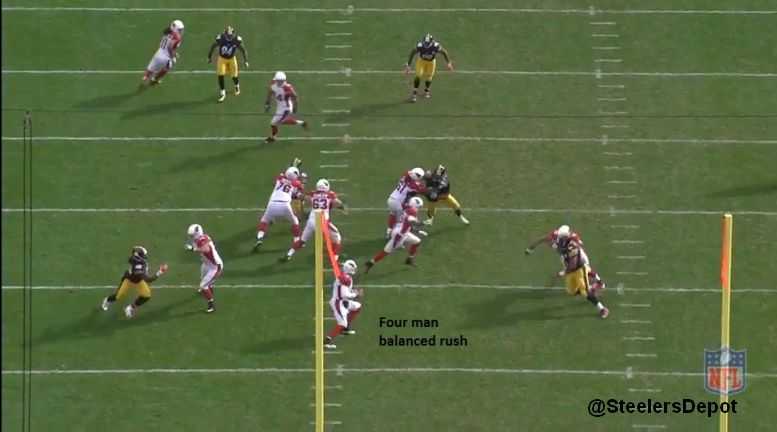 Will the Steelers blitz out these looks too? You bet. Against the Cleveland Browns, Shazier lines up at LOLB, giving the appearance of a blitz. But he drops with the CB coming from the other side of the field, unblocked and dropping the quarterback. 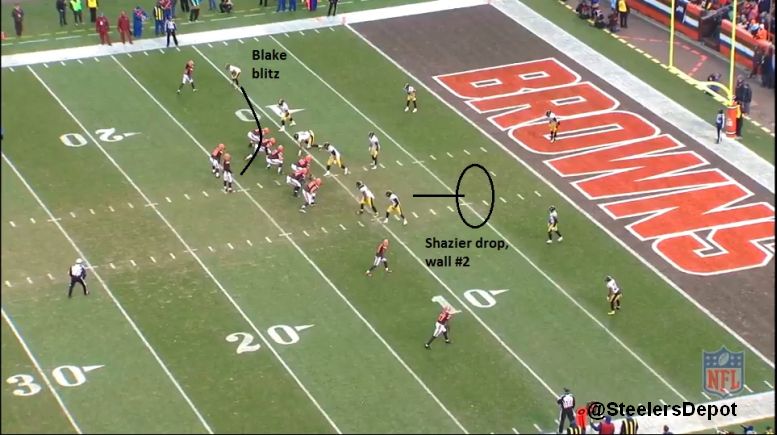 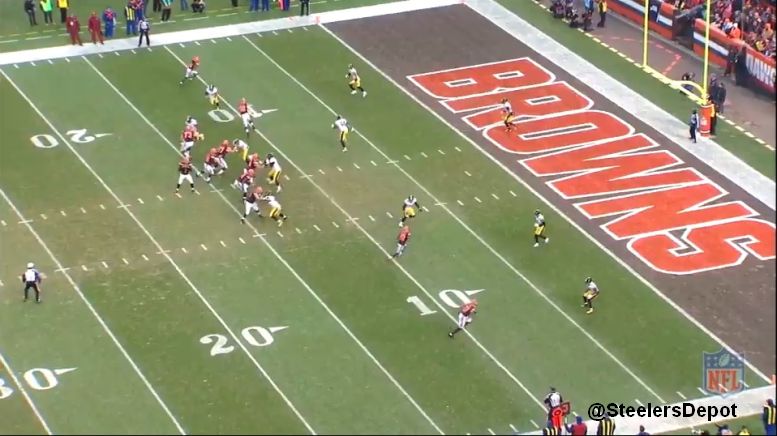 This isn’t exclusive to Shazier, though he’s the most likely candidate to do it. The Steelers will move their guys all over the place, especially in advantageous downs/situations. Here’s Lawrence Timmons off the edge. 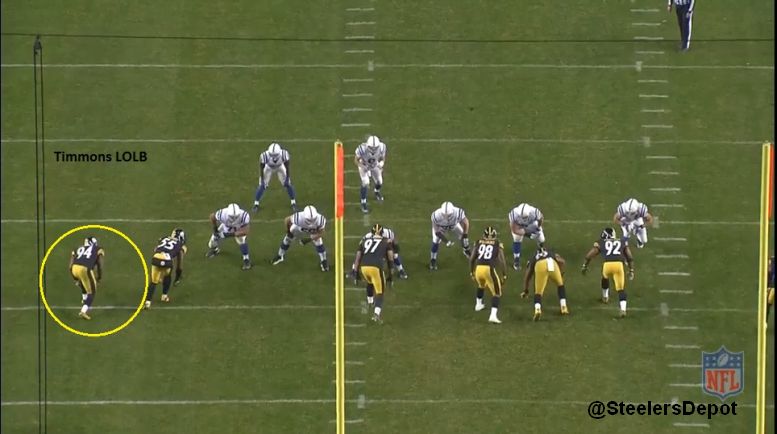 Shazier, however, is not a big threat off the edge and the overall success of these looks aren’t drastically better. Often, he’s just drop into coverage, 26% of the time according to our charting, and he lacks the upper body strength to be a threat to run through the tackle.

Watch how easily he’s rebuffed against the Patriots’ right tackle back in Week One.

Still, this is a way to compensate for the loss of someone like Dupree. I don’t know if you’ll see it that much more often this year but it is another item in the toolbelt in this all-hands-on-deck effort to generate pressure.