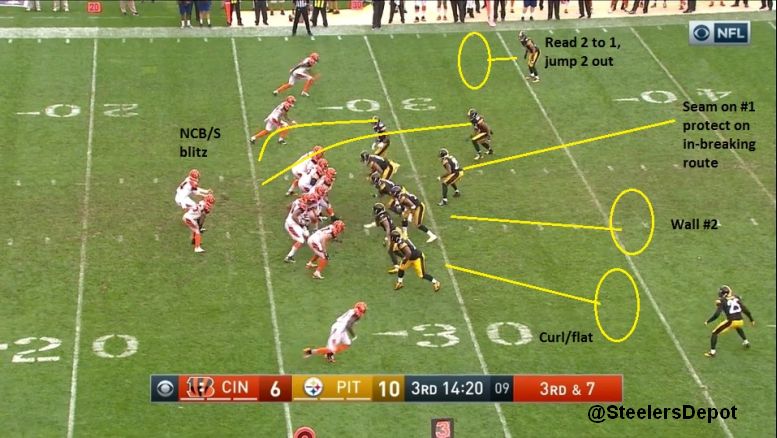 You have to tip your hat to the Pittsburgh Steelers’ defense. Facing two tough-on-paper offenses to start the season, with an underwhelming pass rush, they’given up a pair of 16 point performances. That meets Keith Butler’s goal of holding teams under 17.

Butler has to be credited with calling two really solid games. The way he’s gone about things has been a little surprising, his lack of aggression has been noted a thousand times over already on this site, but he’s picked and chose his spots to let his hair down, go a little wild.

And it nearly resulted in another interception for Ross Cockrell.

Last year, we broke down Cockrell’s interception of Joe Flacco, taking Dick LeBeau’s Storm Fire Zone. And last week, we noted it again but with Butler’s wrinkle of bringing both cornerbacks instead of one cornerback and a safety.

Early in the third quarter against the Cincinnati Bengals, Butler went back to the classics with Butler’s original Fire Zone. And again, Cockrell came *this* close to the pick.

Let’s break it down chronologically. Here is Cockrell’s INT against the Ravens last year. The basic tenets of the play: the strong safety and nickel corner blitz, the away side defender drops, while the cornerback – Cockrell – reads 2 to 1. If the #2, inside, receiver runs a short out-breaking route, the CB will pass #1 off to the safety and jump #2. And that’s what happens, him stepping in front of the Ravens’ receiver and picking the pass off.

And here it is last week. Similar idea but both corners blitz and the safety – Robert Golden – traps #2. Here, the pass is incomplete down the middle to Jordan Reed.

And so Butler breaks it out again on the Bengals’ opening drive of the half. Now that we’ve seen it three times, we’re able to start identifying some tendencies. The first call, Cockrell’s pick, came on 3rd and 6. The call last week against Washington was on 2nd and 6. And yesterday’s is on 3rd and 7.

We’re going to change up the verbiage slightly to better identify the name of the blitz. The coverage is the same but when run out of sub-package, LeBeau called his “Thunder,” not “Storm.” From LeBeau’s playbook, here’s a look at Thunder 2Z.

In the two clips above, that’s been Lawrence Timmons’ responsibility.

Sunday, the Steelers ran this out of dime, which I really dig, leaving the responsibility to Golden, who so far, has always rolled down into the box when Pittsburgh has gone into dime. You’ll see Golden turning and running with #1 vertically in the picture below while the safety, Sean Davis, out of view, rolls over the top to help bracket him. Davis’ primary goal is to stop any vertical throw, Golden’s, to stop any in-breaking route.

Here’s Golden assignment with the rest of the key pieces. 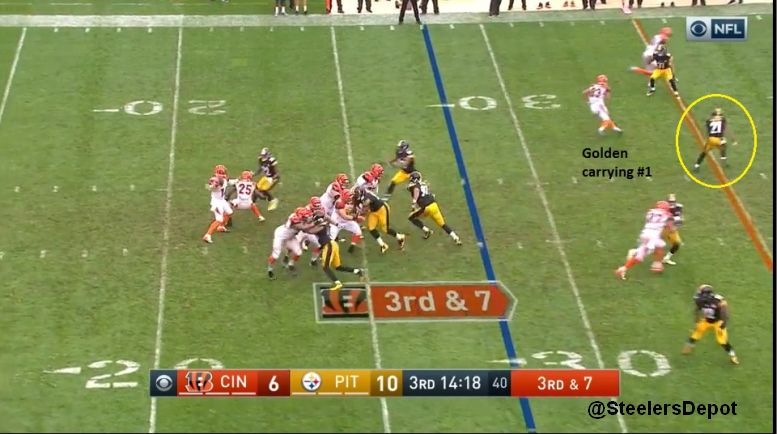 Cockrell reads 2 to 1 and as he sees #2, rookie Tyler Boyd, break an on out route, he jumps the route. Mitchell is free on a blitz, forcing Andy Dalton to get rid of the ball, and Cockrell comes oh-so-close to picking it off. The ball simply clips through his hands. 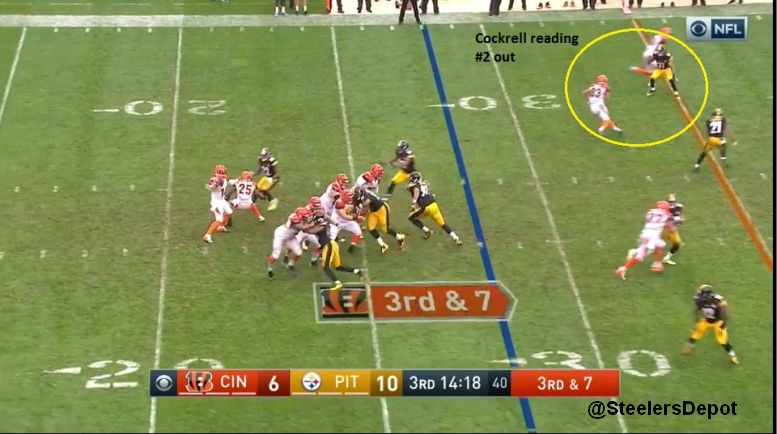 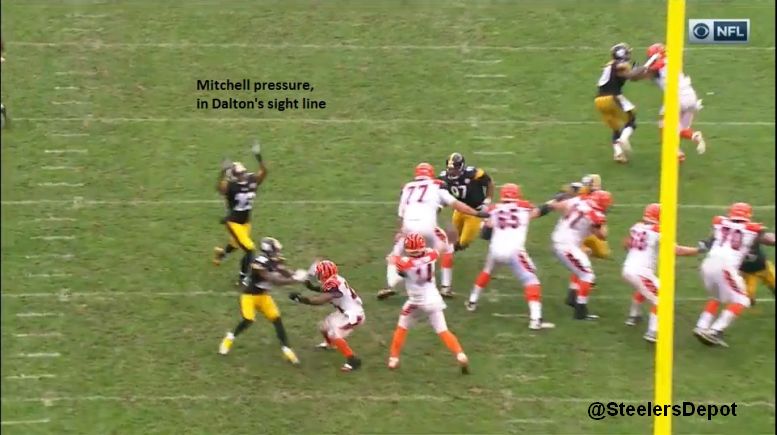 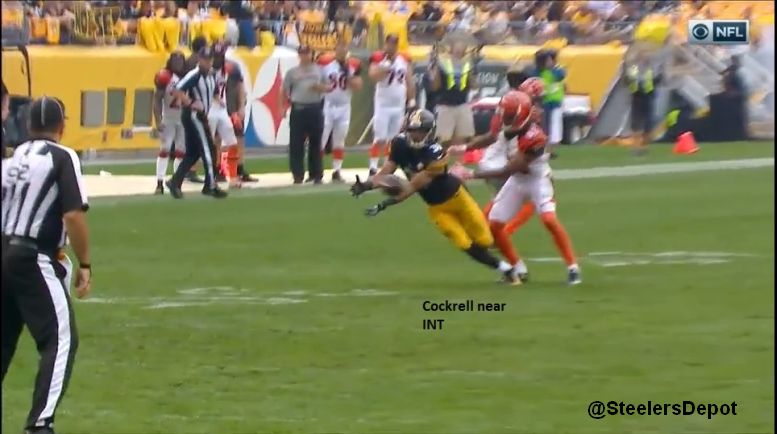 Why did Butler decide to blitz the safety and slot instead of both cornerbacks, like he did last week? I can’t answer that question with complete certainty.

My best guess is because of the check is partially dependent on the formation. Against Baltimore and Cincinnati, the offense was in a 2×2 set. Against Washington, it was a 3×1. The specifics behind that, again, I couldn’t tell you, but that’s probably a good place to start.

Through two weeks, Butler certainly has been more choosy about when he wants to send pressure. But maybe that’s not a bad thing. Maybe it isn’t choosy – maybe it’s more varied. After all, Butler blitzed a ton last year, tipping his hand and in a way, being more predictable.

Either way, this was an excellent call that nearly created another splash play. A good defense. A good coach. Things aren’t perfect. But they’re enough to win. I’ll take it.