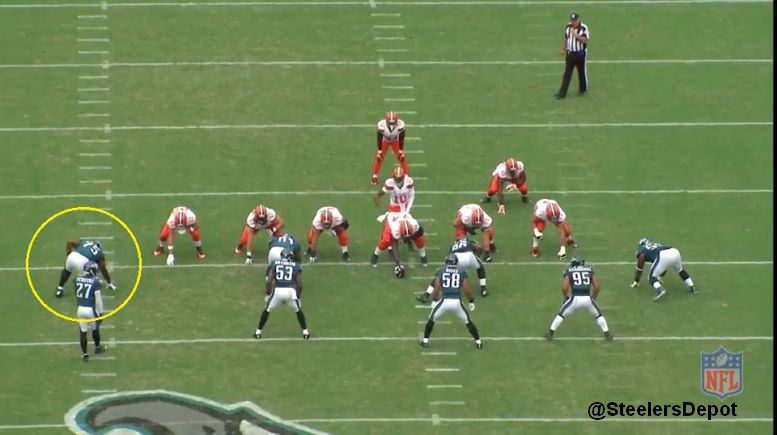 Let’s plot out where everyone lines up. The Eagles run a 4-3 defense under DC Jim Schwartz. Brandon Graham is the LDE, Fletcher Cox usually the 3 tech, Bennie Logan the one tech, and Connor Barwin the RDE. Beau Allen will come in and replace Logan. Vinny Curry will come in at LDE and see time inside as a tackle while Marcus Smith, the first round pick in 2014, rotates in at right end.

Barwin, Cox, and Graham have all played at least 70% of the Eagles’ snaps this season.

In sub-package, the Eagles run a 4-2-5 with Nigel Bradham and Jordan Hicks at linebacker. In their base, Bradham is the SAM, Hicks the MIKE, and Mychal Kendricks the WILL. Last week, Stephon Tulloch siphoned away some base snaps from Hicks, serving as the MIKE. He’s a Schwartz guy from their days in Detroit.

They’re mainly a two gap team, looking to hold the point of attack and let their LBs roam.

Of course, you’re going to get that Wide 9 look Schwartz is basically synonymous with.

And some funky looks in third and long like this one, with Graham and Cox outside the tackle. 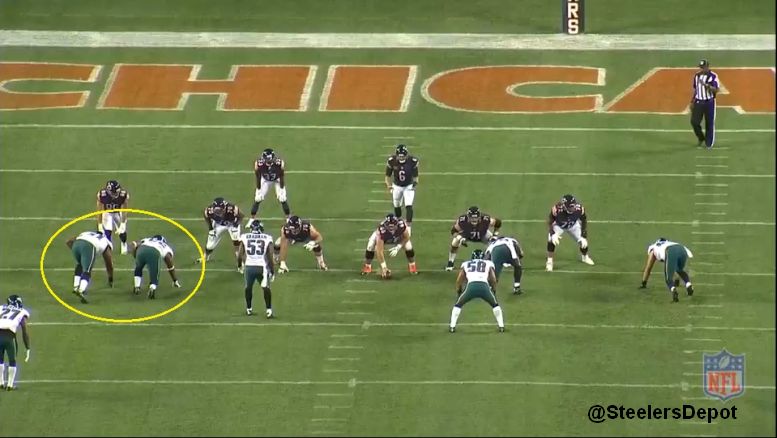 In the secondary, Leodis McKelvin will be their LCB if he can play. Dealing with a hamstring injury. If not, rookie 7th rounder Jalen Mills will replace him with Nolan Carroll – a guy I’ve always liked – playing opposite. Ron Brooks. also a Schwartz guy, is in the slot.

Malcolm Jenkins and Rodney McLeod are your safeties. Jenkins spends A LOT of time in the box and he finished with over 100 tackles in 2015. McLeod was a prized free agent from St. Louis.

See a lot of Cover 1 from the Eagles. Especially in the red zone and third and medium/short. 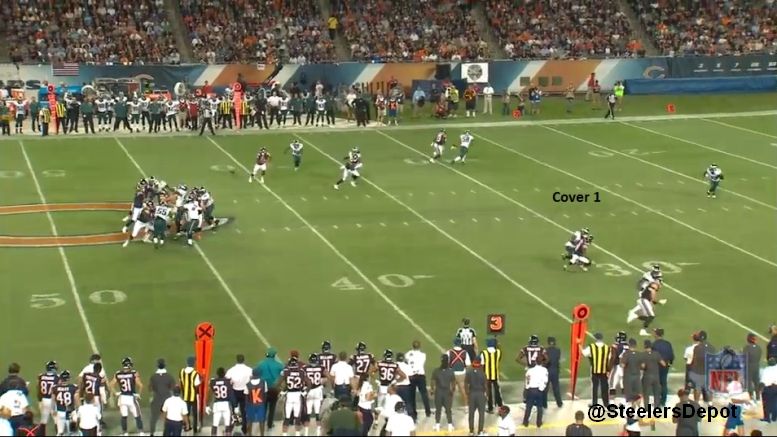 In third and long, you get some more Cover 2 from them. 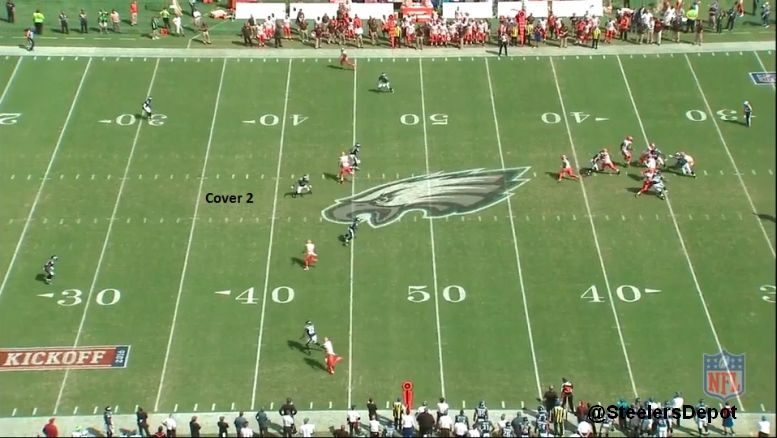 They will play their cornerbacks on islands, their safeties don’t always get a lot of depth, and the Steelers should like the matchups they get this week. Go attack them. Mills in particular, who bit on a double-move and gave up a 49 yard catch to Alshon Jeffrey.

I know traditionally, Schwartz isn’t very blitz-happy, Todd Haley said as much this week, but I’ve seen a couple wrinkles from him in the first two games.

Second play of MNF, Jenkins comes on a safety blitz and takes down Jay Cutler. 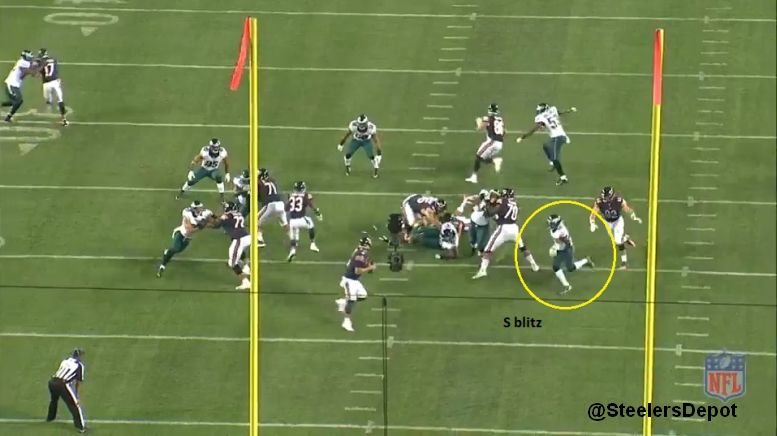 And here’s a NCB blitz from Week One.

Defensive end Bryan Braman and safety Chris Maragos lead the team with 44 special teams snaps. Neither are apparently credited with a tackle yet this season. Maragos functions as the upback on punts with Jalen Mills and Brent Celek flanking him.

The Pittsburgh Steelers travel to the land of brotherly love on Sunday to take on their inner-state rivals, the Philadelphia Eagles. There have been a lot of question marks surrounding the Eagles offense coming into the season, mainly because of the Sam Bradford shipment that forced rookie Carson Wentz into an immediate starting role- conversely, very few question marks surrounded their stingy defense. Let’s take a look at who may be causing headaches for the Steelers offense on Sunday.

We begin by taking a look at the interior of possibly one of the best defensive lines in football- you’d be hard pressed to find a more aggressive, efficient bunch. Bennie Logan may not have put on his best performance during the whipping on the Chicago Bears on Monday night, but don’t be fooled- his 6’2” 309 lbs frame causes plenty of disruptions in the middle.

The combination of Logan and counterpart/monster Fletcher Cox ranked 4th and 5th respectively for a combined 89 defensive stops in 2015. In other words, when healthy, Logan can dominate.

The man beside him is consistently a game-in, game-out defensive beast. I’m talking about non other than Fletcher Cox. Last season saw him as one of the top 3 defensive tackles, eating offensive lineman for breakfast, lunch and dinner. What’s even scarier is the fact that his defensive abilities are not one-dimensional; his 10 sacks last season, and his consistently high pass rushing grades put fear in the eyes of the offense, as he’s targeted for more than just a run-stopper.

Taking a look below we begin to understand his dominance in the aforementioned run game.

Lining up over tackle Bobby Massie (because of their wide-9 approach, which will be discussed shortly), he charges downhill as soon as Jeremy Langford receives the handoff on a draw. Cox puts Massie on the Fletcher-express, forcing him backwards 5 yards before meeting Langford in the hole, stopping the play for no gain.

The Eagles’ 4-3 defensive ends round off this petrifying line. Warning: they’re not slouches, either. Brandon Graham has turned into one of the elite 4-3 ends in the NFL, and although the season is still young, he’s grading as the top player at his position. Marcus Gilbert and Alejandro Villanueva have had their hands full the past two weeks, but this might be the biggest test they’ll face in 2016.

Thus far, Graham has amounted 2 sacks, 6 quarterback hurries, and 6 tackles for no gain. Although he’s strong in the run game, his meat-and-potatoes lie in his pass rushing abilities. One of the reasons for this is the wide-9 technique the Eagles are so fond of using- the ends line up wider than usual, as to gain an advantage over the tackle who now has to jump into position as quickly as possible (and sometimes does not do so in time). Take a look at the clip below, and you’ll see what I’m getting at.

Graham lines up in his wide-9 stance, and as soon as the ball is snapped, Bears’ tackle Bobby Massie is forced to gallop to his right and cut off Graham. Unfortunately for him, it was unsuccessful; Graham dips his shoulder on his way to sacking Jay Cutler, setting up a then 2nd and long. Pittsburgh has to avoid getting themselves into these types of situations, as long distanced downs will eventually spell trouble with this opportunistic defensive line.

Opposite Graham is Connor Barwin, who, if you had to pick a weak link on this line, is your culprit. The questions surrounding Barwin never lie in the pass rush, but instead exist in his run-stopping abilities (or lack thereof). Last season saw him put together 8 sacks and a ridiculous 23 tackles for no gain, but was destroyed when teams deployed their run game in his direction. Look for DeAngelo Williams and the offensive line to target the side of Barwin all day long, as this may be their only shot at stringing together any type of running attack.

The linebackers consist of Nigel Bradham, Mychal Kendricks, and Jordan Hicks. Starting with Bradham, we see potential that may not be clicking with his on-field production just yet. He struggled mightily in 2015, especially in the area of run defense, and that’s seemed to carry over into the start of his 2016 campaign during the first two weeks.

His strong suit is definitely his coverage abilities, which looks to be a recurring theme across all three of these players- with a monstrous line such as this one, they’re forced to sharpen and improve their coverage abilities.

Above, Bradham flashes some of those abilities in the 3rd quarter of Monday night’s contest- he leans over to the line as if blitzing, but backs into zone coverage as soon as the ball is snapped. He scans the play pre-snap, recognizing the single receiver lined up to his left. He begins right while keeping his eyes on Jeremy Langford, as to stay with his run-stopping assignment. As soon as he recognizes the play-action, he reads Jay Cutler’s eyes towards Alshon Jeffery, and eventually peels left into his flat zone coverage. He grabs the interception, bringing the ball back to the Chicago 2 yard line. Again, something the Steelers’ offense has to be weary against.

Mychal Kendricks seems to be the anomaly among this linebacking corpse, as he consistently struggles in the air but compensates by leading the bunch against the run. Seems like the proof’s in the pudding- look for the Steelers to run against the Bradham’s side (hoping that combination’s doubled with Barwin as they tend to shift), while deploying Jesse James and newly minted Xavier Grimble against Kendricks.

The middle is guarded by Jordan Hicks, who doesn’t always use his 6’1”, 234 lbs frame to his ability. He’s sometimes taken for rides when engaged with linemen, as he, like Bradham, struggles in the run game. Not something you want to hear when discussing you’re MLB, but hey, it’s something that can be utilitied by the Steelers.

The secondary has their ups and downs, as many do; for the most part, they hold their own. Leodis McKelvin (who probably has the best name in football), will more than likely be missing the clash, so they’ll be relying more heavily on the likes of Ron Brooks and Jalen Mills to fill the void.

Brooks has struggled since entering the league, but had a mediocre game last week against the Bears; he allowed 5 receptions on 6 targets for 49 yards and a quarterback rating of 100.7, while registering a lone batted ball. It was Eddie Royal who did most of the damage, as his shifty and agile routes seemed to cause problems. Mills also struggled, allowing 4 receptions on 9 targets for 71 yards as 3 came against Alshon Jeffery.

Regular starter Nolan Carroll held down the opposing side, only being targeted 2 times against Jeffery for a combined 33 yards. Although he didn’t have a great game, he did enough in coverage to prevent Jeffery from getting loose, while also registering 3 tackles. Look for a combination of these players to follow Antonio Brown, who’s slated to have a big game after struggling [gasp!] last week.

Rodney McLeod had a quiet game last week, hovering around the field as need be. It was Malcolm Jenkins who had the larger impact of the two safeties, and look for the same to transpire on Sunday: of his 2 targets against the Bears, one was caught for 7 yards, while the second was batted away. Look for Jenkins to focus on James and Grimble, as well.