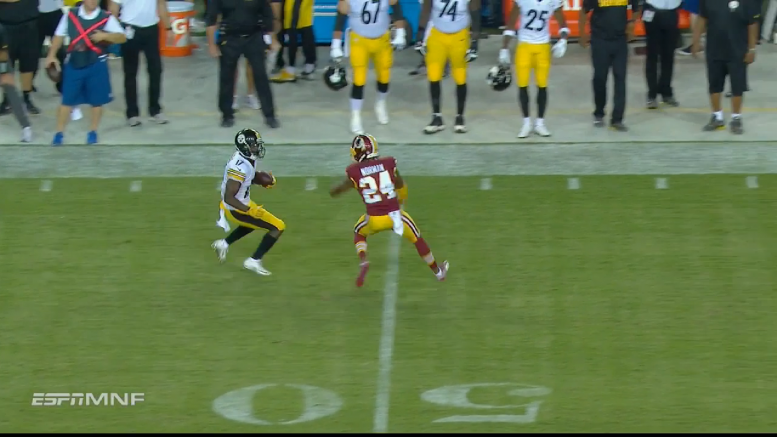 He had a distinctly quiet second half—in fact, the Pittsburgh Steelers turned much more to heavier personnel in the third and fourth quarters after securing the lead—but second-year wide receiver Eli Rogers’ NFL debut went pretty well, all things considered, including a touchdown reception on which he was not even the target.

In all, Rogers was targeted seven times during the first half—or actually six times, given that, as mentioned, his touchdown pass came off a deflection—and he caught all but one target for 59 yards and the score. He was second or tied for second in both categories for the Steelers, behind, obviously, Antonio Brown.

Catching six of seven passes in your first game is a good way to start your career, for certain, but more important is the fact that three of his receptions either converted third- or fourth-down situations or ended up in the end zone.

Although the Steelers’ second drive of the game ended in a Ben Roethlisberger interception while targeting him on a route on which the quarterback was expecting the young receiver to continue out of his break toward the sideline, he did earlier extend that drive by streaking open over the middle on third and one, gaining yards after the catch for a 20-yard gain.

Rogers was targeted four times and caught four passes on the Steelers’ final drive in the first half, one which he finished it off with the score. For the second time in the game, he extended the drive by streaking open over the middle on an underneath route, this time on fourth and one, and again, he turned it upfield, finishing off with 19 yards on the play.

Through the first half, the Steelers’ offense looked much as we anticipated that it would based on the first-team unit’s brief appearance during the preseason. In other words, if featured a great amount of ball out of the 11 personnel grouping, with Rogers operating out of the slot, and conducted via the no-huddle more often than not. While things got off to a slow start, the offense eventually looked as we expected it would as well, and Rogers was a component of that.

The Steelers were exceptional through most of the night in situational football, and Rogers factored into that converting a third-down and a fourth-down play, in addition to contributing to their red-zone and goal-to-go success rate with his three-yard touchdown on first and goal.

You can expect Rogers to continue to log significant time after Markus Wheaton returns, though the offense will always mix and match. But as long as he keeps stepping up in key situations, as he did multiple times in the first half, and becomes dependable, he is going to be on the field.