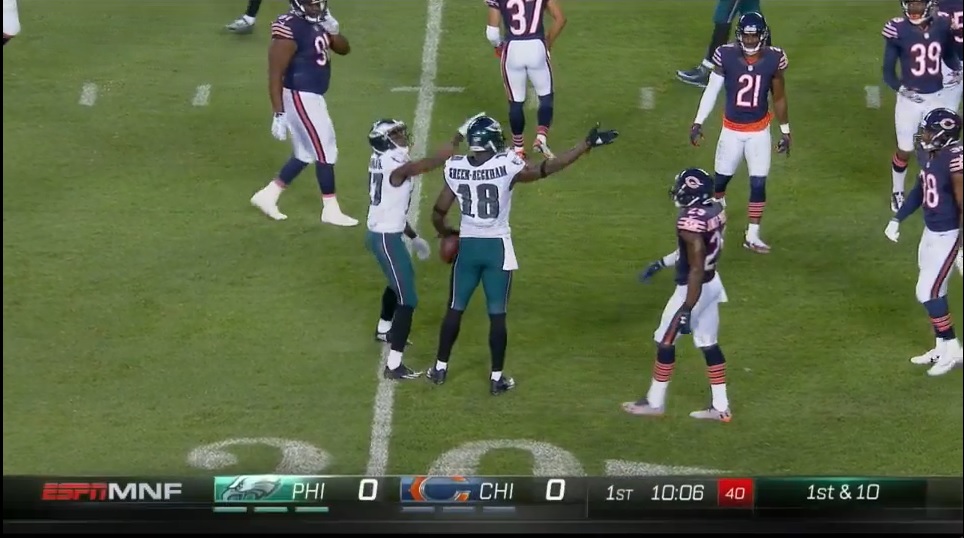 Not a lot going on from the Pittsburgh Steelers’ homefront today but there was one Philadelphia Eagles headline that caught my eye.

The Eagles are looking to get their 6’5 receiver more involved in the offense this week. Per the Philly Voice, Doug Pederson mentioned they’re looking to to continue to increase Dorial Green-Beckham’s workload.

“We’ve increased his workload the last week and we want to continue to do that and move him around the more comfortable he gets with our system,” Pederson told the Voice.

The Eagles head coach also noted they had a couple of plays drawn up for him in the red zone that didn’t happen to pan out.

In the first quarter of last week’s win over the Chicago Bears, here’s Green-Beckham as the initial read on this sluggo, though it’s well defended and Carson Wentz fires elsewhere with the football. He’s lined up at the top of the screen below. Please ignore the Bears terrible “aerial” camera angle.

Through the first two weeks, DGB has just four catches on six targets and been held out of the end zone. But at 6’5, he’s an obvious threat and as you saw in that clip above, the Eagles will isolate him on the backside and get one-on-one matchups.

The Steelers put Ross Cockrell on A.J. Green last week to counter the size advantage. It’s fair to wonder if the team will do the same, situationally, on Green-Beckham. The Steelers have been successful so far in large part due to their red zone defense, ranking the best in the league. But it’s tough to defend 6’5 and if the Eagles can capitalize when other teams haven’t, it’ll be a competitive game.