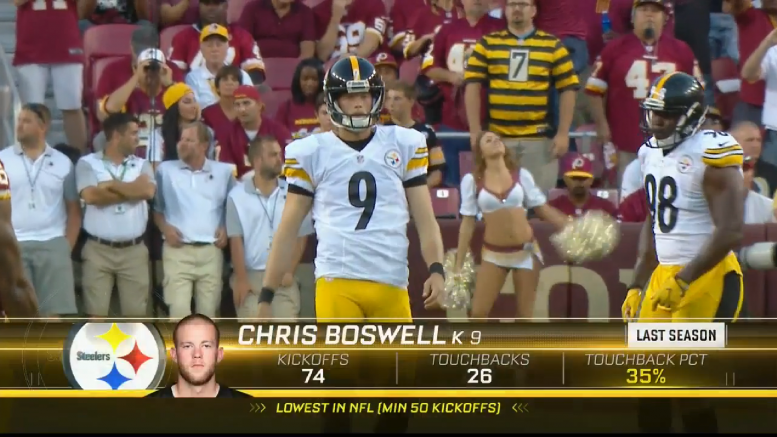 It is not every day, nor every site, on or from which you will see an article that focuses on the kicker in a game in which the offense scored five touchdowns and kicked one field goal, winning by 22 points, but Chris Boswell’s first ever appearance in a season opener is one that I found to be worth noting.

And it wasn’t really about his field goal, which, granted, was a 46-yarder, far from a ‘gimme’ and he hit is about as well as you can expect one to be hit. But it was the other aspect of his duties that is worth mentioning, particularly with respect to contracts to how his first season went.

As you might expect, given that the Pittsburgh Steelers scored a lot of times last night, that also means that the Steelers had a lot of kickoffs. That would be seven of them, to be more specific, because they scored six times and were responsible for the opening kickoff after deferring to the second half.

Boswell recorded six touchbacks, and the only kickoff on which he did not record a touchback was the one that followed Antonio Brown’s second touchdown receptions, following which he received an unsportsmanlike conduct penalty for…twerking—I think.

And on that one, which was booted from the Steelers’ 20-yard line thanks to the 15-yard penalty, was fielded at the three-yard line after traveling 77 yards. In other words, had it been taken from the 35-yard line, where kickoffs are taken, it would have gone out of the back of the end zone.

This is notable because it shows Boswell having a much stronger leg on kickoffs than he showed in his first season, which is actually a trend that began to turn during the postseason, which I wrote about, but with the caveat that one of those postseason games took place in the high altitude of Denver, which allows balls to travel further.

Last night, he had an effective touchback rate of 100 percent on seven attempts if you consider only the distance that the kickoff traveled—I would imagine that any kicker would struggle to net a touchback from the 20-yard line.

That was not close to the case last season. He only recorded 26 touchbacks all throughout the regular season on 74 kickoffs, which is just 35 percent of the time, and is comparable, perhaps even a bit lower, to what the Steelers were getting out of Shaun Suisham.

I am far from an expert in breaking down kickers and punters and what they are doing with their approach and technique, but I have to imagine that Boswell is doing something different since he first made the team four games into the 2015 regular season.

It’s just unfortunate that when the Steelers seemingly finally find a reliable kicker who can also produce touchbacks, it comes in the year in which the league moves the line of scrimmage upon a kickoff touchback out to the 25-yard line.