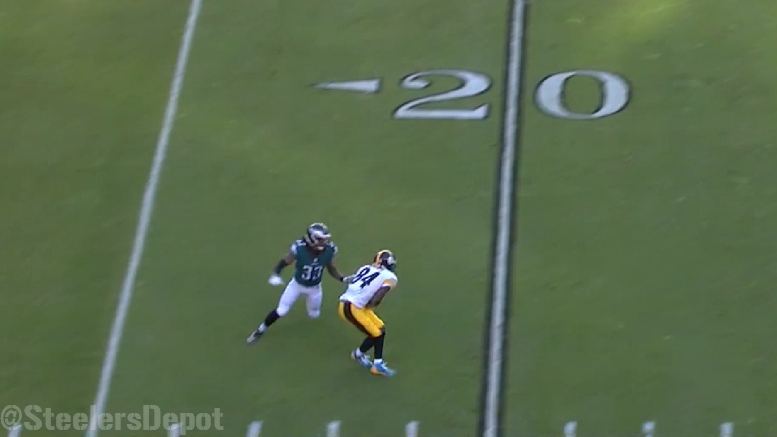 I hope that Antonio Brown is happy with yesterday’s game, because, at the bare minimum, if nothing else, he got his wish of seeing the ball more. Unofficially, he had 19 targets during the game, though that include an official ‘no play’ target, on which he drew a defensive pass interference penalty, which went for 19 yards.

On the evening, he caught 12 of his 18 targets, a season-high, and in doing so compiled yet another season-high 140 receiving yards. His 305 receiving yards through three games now ranks fourth in the league, though the lead is currently 408 yards.

Whatever else might be said of the game—and you can rest assured that we will have a great deal to say over the course of the next week, and have already had much to say in the hours after the game—at the very least, Brown does deserve credit for bouncing back after having one of his more uninspiring outings in years.

The last time that Brown failed to achieve his bare minimum benchmarks of five catches for 50 yards was in Ben Roethlisberger’s return from injury game against the Bengals last year, and he responded in the following week with a big showing against the Raiders, catching 17 passes for a monstrous 284 yards.

In other words, it is in his resume already that he bounces back from shaky performances with above average numbers, and yesterday’s game puts him back on pace, statistically, anyway, to have yet another excellent individual season, as he is currently averaging eight receptions for 101.7 yards per game.

Projected over the course of a full season, Brown should have a ballpark output of approximately 128 receptions for 1627 yards or so, and those figures are more or less right in line with what he has been doing over the course of the past few seasons.

Of course, he did have one highly frustrating drive in which he was the target on three straight incompletions at the end of the third quarter. On the first two passes, Roethlisberger’s aim was high and the ball arrived high, but Brown got his hands on both of them and he could not bring them down. On the third target, he was already at the sideline and a defender came out in front of him to defend the pass.

Still, he was the only target resembling reliability for Roethlisberger on a day in which he, too, was not his usual self, as should go without saying just based on the scoreboard, and, combined with two penalties that he drew for a total of 34 yards, he accounted for a very large percentage of their total output on the day.

He, in fact, caught exactly half of Roethlisberger’s completed passes and 54 percent of his yardage. Yet it should be noted that not a single one of this receptions came on third down, and his lone fourth-down reception came nine yards shy of moving the sticks. I hope after this game that Brown understands how much more valuable wins are than one’s individual contributions.