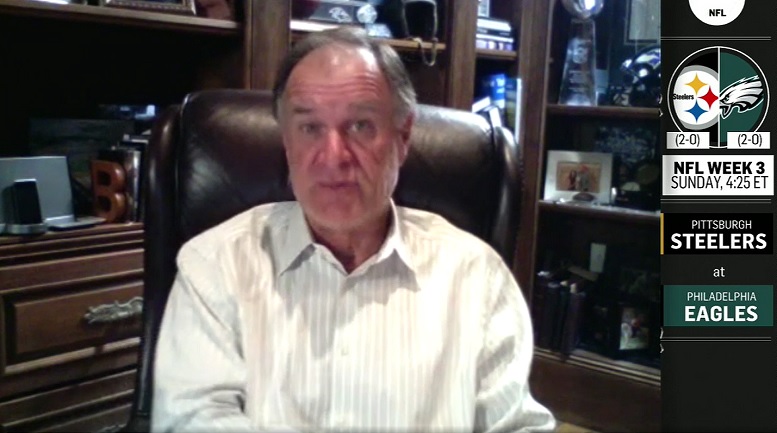 Ever since he retired from coaching in the NFL, I have been a fan of a lot analysis done by Brian Billick, who currently works for the NFL Network. With that said, I think Billick has been a little lazy with his analysis of the upcoming game between the Pittsburgh Steelers and the Philadelphia Eagles and it started Monday night.

They get paid too! But yes, next week against "Blitzburgh" will be a real test. But he looks poised and accurate nonetheless. https://t.co/fKhyQLe1os

That tweet aside, here’s what Billick had to say a few days ago on Mike and Mike when asked about the expectations for Wentz in the Eagles Week 3 game against the Steelers and once again we are left wanting a little deeper analysis from the former head coach of the Baltimore Ravens.

“This is the Pittsburgh Steelers and What he’s going to see schematically in their zone drops, some of those creative blitzburgh zone pressures, but almost more importantly, he’s going to be across the field from Ben Roethlisberger and that unbelievable offense. As a quarterback, I know they’re not directly facing one another, but you start to feel that I got to keep up, I’ve got to do what these guys are doing, or were going to lose contact here and I want to be that guy,” said Billick. “And a lot of people are making comparisons to style of play, so we’re going to find out about Carson Wentz and the Philadelphia Eagles with no due respect to 2-0. 2-0 is 2-0 and you love it, but this is going to be a matchup that really tells us whether Philadelphia is a pretender or a contender and exactly just how far we think Carson Wentz can go in his first year.”