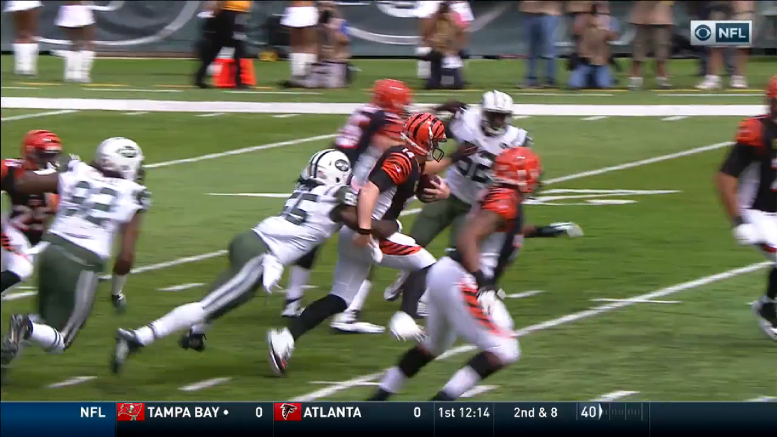 The Cincinnati Bengals were fortunate to come away with a late field goal yesterday afternoon to secure a victory in their season opener against the Jets, but that does not mean that all is right in ‘Who Dey’ land.

Of particular concern has to be the performance of the offensive line, which gave up an astounding seven sacks against an admittedly stout defensive front seven from New York. Those seven sacks produced a net loss of 42 yards—and represents 22 percent of the total sacks that the offense gave up in 2015.

Yes, the Bengals offensive line yielded just 32 sacks in 2015, and only 20 of them came during the first 12 games of the regular season when Andy Dalton was health from the beginning of the game to the end. AJ McCarron, on the other hand, was sacked 12 times over the final four games.

Part of the reason for the disparity is because Dalton has among the quickest releases in the league, averaging from snap to release a time to throw of 2.41 seconds, amongst the five lowest averages in the league last season.

But Dalton didn’t have so many opportunities to get the ball out quickly as he would have liked. That was due in part to the Jets’ tight defensive coverage, and in part to the fact that the Bengals’ offense is in a transition phase with a number of new pieces—including a new offensive coordinator—being worked in.

Yet the main component of the damage done was simply the pressure generated by the Jets’ defensive line, particularly up the middle of the defense and through center Russell Bodine. Even a young neophyte by the name of Steve McLendon, whom you may have heard of, recorded two sacks of his own during the flurry.

Second-year man Leonard Williams capped the day with two and a half sacks, one of which he split with Muhammad Wilkerson, who also had a solo effort of his own. Linebacker Lorenzo Mauldin added a seventh sack, but I think the fact that the defensive front three produced six sacks says a lot about how porous the Bengals’ interior defensive line was.

As mentioned, admittedly, the Jets do have among the best defensive lines in the game, and chances are the Bengals don’t give up that many sacks in a game for a good while. According to Alex Kozora, the last time they did so was in 2008—when Ryan Fitzpatrick, the Jets’ quarterback, was under center.

The Bengals have been sacked 7 times today. Most as a team since October 2008. Ryan Fitzpatrick was their QB that day.

Cincinnati never gave up more than four sacks in a single game during the 2015 season, although they gave up that number four times during the year. That 16-sack total in a four-game span represents a full half of their total sacks on the year, during just a quarter of the season.

Still, if this early showing reveals any meaningful weakness for the Bengals, whether it’s rust from Dalton, growing pains of a young offense, and a deteriorating offensive line, the Steelers had better find a way to exploit it.