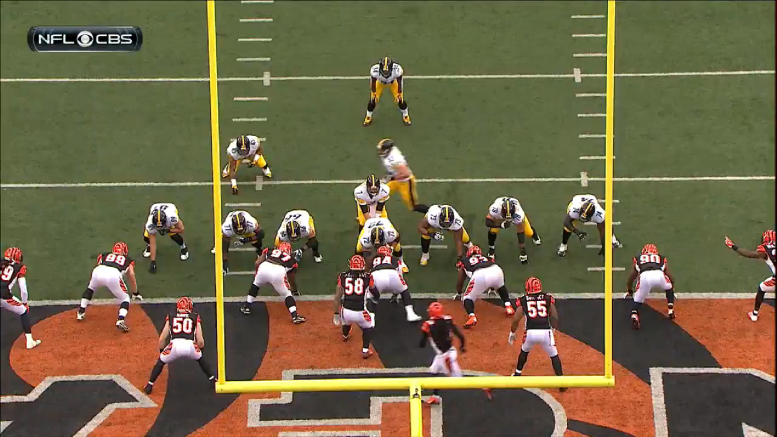 Question: Was the season opener an indication that the offense is moving away from the tackle-eligible?

Back on Monday, I wrote prior to the game that fans should look out for either Chris Hubbard or Ryan Harris possibly to be used as a tackle-eligible tight end during the game for blocking purposes, when taking into consideration the way that they used that role last season, as well as all that had transpired at the tight end position since then.

Heath Miller, of course, retired, and Matt Spaeth was released with a failed physical, so their two best blocking tight ends had gone out the door. The player they brought in to be their top tight end, meanwhile, is still shelves while recovering from ankle surgery, and will still miss another five games.

I wondered if the coaching staff would have enough faith in third tight end Xavier Grimble to receive playing time, but he did, in fact, to the tune of 15 meaningful snaps, on 14 of which he not only was on the field, but served as the in-line blocking tight end, which is where the tackle-eligible would line up.

For some more perspective, last year’s ostensible third tight end during the first half of the season Will Johnson only saw less than 80 snaps as a tight end, including the playoffs, all year. Hubbard was used as a tackle-eligible 26 times during the year, and they likely would have used him even more had they trust him more, as they did with Mike Adams in the two years prior.

But there was no tackle-eligible in Washington, and the Steelers even ran with three tight ends on the field for 10 plays. On the other hand, it should be noted that they ran just four plays inside Washington’s 10-yard line, of which three were passes.

I will admit that I have always been partial to the idea of using an extra lineman as a blocker, though of course it lessens the versatility on passing downs as he doesn’t impose a receiving threat. I don’t know if Monday night’s usage of Grimble is an indication that they don’t feel the need to use an extra lineman this year, but it will be interesting to see if that changes during some true goal-line situations.