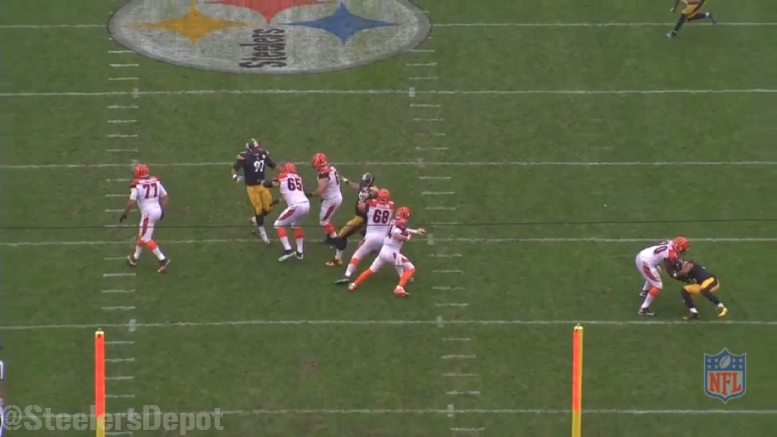 Question: Is the lack of pass rush through the first two games of the season more scheme or talent?

As we all who follow this site are no doubt surely aware, the Steelers have struggled significantly in terms of getting to the quarterback since they last won a playoff game in 2010, at least up until last season, when they were near the top of the league with 48 sacks. They also coincidentally finally won a playoff game again.

Through the first two games of the 2016 season, however, the Steelers have recorded just one sack, and that sack went for a loss of zero yards, as it was a result of tackling the quarterback before he reached the line of scrimmage on a scramble attempt, rather than what you would expect of a conventional sack. Arthur Moats, who one who recorded the sack, dropped into coverage at the start of the play.

It is true that the Steelers have struggled to get much pressure on the quarterback this year, but it is also true that they have not blitzed much this year, and at times even used a three-man rush. And a lot of their pressures last season were produced by a variety of blitzes and disguises.

If the Steelers are not spending a lot of time just yet this season doing those things, then it would stand to reason that the pressure might not come with as great a frequency, to be sure. But they should certainly be doing better than they have been.

The outside linebackers in particular have contributed little to the pass rush, and that includes Moats and James Harrison. The absence of Bud Dupree certainly doesn’t help matters. But Cameron Heyward and Stephon Tuitt have been far from a consistent presence as well.

We know that they at least have talent, and surely the sacks will come, but it also seems obvious that there is some talent deficiency in the front seven when it comes to producing a pass rush. But we also know that they have not schematically enabled themselves to put their best foot forward in that regard. So which is the bigger factor?