Real quick look at Stephon Tuitt’s performance against the Philadelphia Eagles Friday. Just 15 snaps but he put on some solid tape. Let’s take a look.

His first snap of the game. Handoff out of the gun off the right side. Combo block by the center and right guard on Tuitt, the LDT. But either by design or a happy accident, probably the former, Tuitt is able to work off the guard and become the force defender on the outside as Arthur Moats shoots inside the right tackle.

The runner is forced even wider and Tuitt has the athleticism to make the tackle for a not even a gain of one.

The following play. Man scheme with the right tackle attempting to wash down Tuitt. But he uses his hands well, getting extension and creating space between he and the tackle and is able to shed the block. 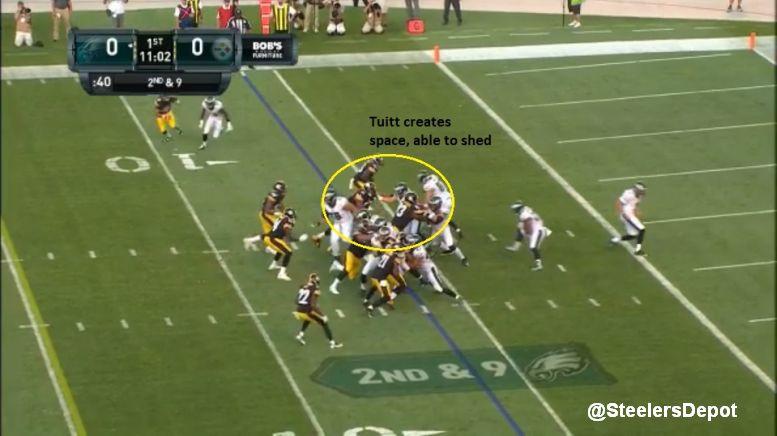 He fills his gap and is in on the tackle for again, another one yard gain. It put the Eagles in a 3rd and 8 and eventual punt.

Start of the second quarter. Eagles are running a power scheme, pulling right guard Brandon Brooks. In typical fashion, you get downblocks to the playside, washing the line down as the guard pulls behind. This leaves center Jason Kelce in charge of sealing Tuitt. Kelce has natural leverage, coming down on Tuitt’s inside shoulder, but Tuitt is able to overcome that, working off the block, ripping under, and sending Kelce to the ground. 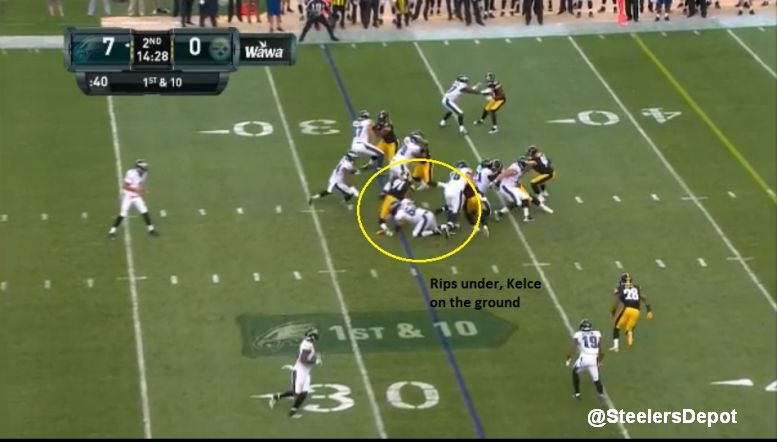 Tuitt trips up the back for a modest gain.

One negative play . He had some trouble anchoring against double-teams, something he’ll see a lot in the Steelers’ predominantly two-down front. It’s hard to look good against them but Tuitt really gets blown off the ball here, creating a lane for the back.

Here’s a stillshot of how far off the LOS he is. 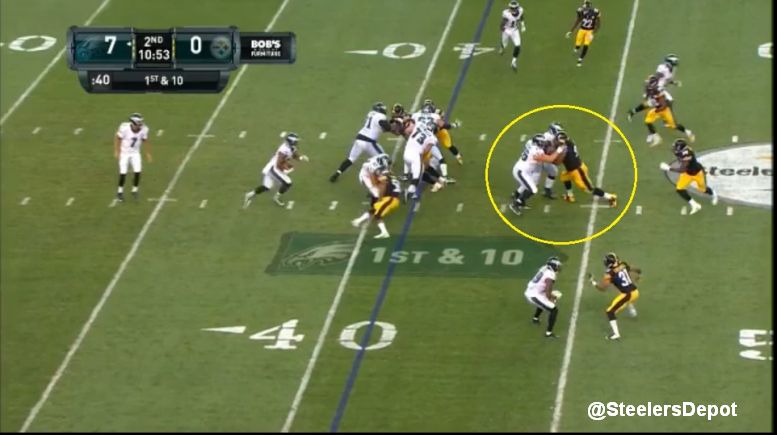 Again, easier said than done, especially behind the safe space that is my keyboard. But typically, players are taught to turn their body and collapse instead of getting blown out. Less surface area for the double-team to attack and you muddy up the running lane by dropping to the ground. Football’s version of a traffic jam.

This game was just a glimpse of how good he is. And though many think about the type of pass rusher he is, there’s no doubt how good he is there, his run defense has overall improved. Because of the active, violent hands he plays with, when base blocked, he does a fantastic job of disengaging and making plays.