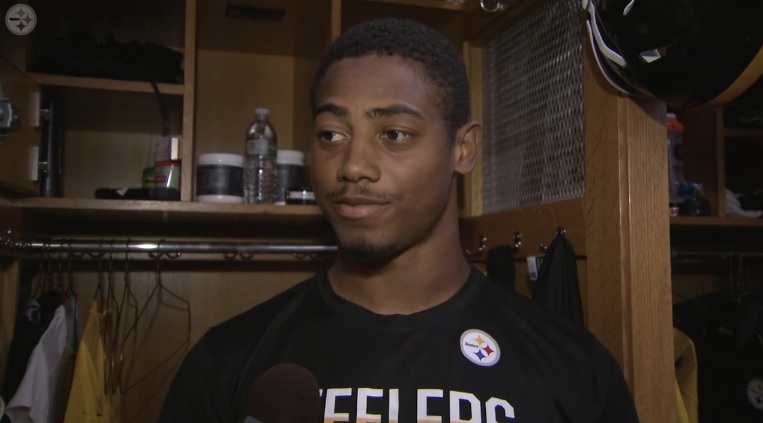 After missing a chunk of camp with injury, Travis Feeney returned to practice last week and made his NFL debut against the Philadelphia Eagles Thursday night.

He played 40 total snaps, 39 coming on defense, and was credited with one tackle.

The rookie spoke to Steelers.com’s Missi Matthews about his experience and particularly, how he could improve.

Billed as a supreme athlete out of Washington, Feeney – who would soon after undergo sports hernia surgery – ran a 4.50 40, jumped 40 inches in the vertical and 10’10” in the broad while producing a 4.42 short shuttle at this year’s NFL Combine.

Those injury concerns dropped him on team’s boards, led by recurring shoulder problems, until the Steelers scooped him up in the 6th. Immediately following the draft, Kevin Colbert and Mike Tomlin noted they had a much higher grade on him.

Though this is just the beginning of his journey, playing in your first professional game is reason to celebrate.

“It felt good. It felt good to be in my first NFL game experience. It was exciting. It puts down the dream that I had that I was able to play in a game. It was just exciting to get out there and be able to show a little bit of what I go.”

Feeney has plenty of ground to make up after missing so much time in camp. With Anthony Chickillo’s roster spot secured and the inside linebacker group all making cases for themselves, it’s fair to assess Feeney as on the outside looking in with a practice squad spot looking more likely.

To change that luck, he’ll have to make a noticeable impact on special teams. And as we hinted at the beginning of this post, he saw just one snap there against the Eagles. Maybe he was at the odd man out, maybe he didn’t have enough reps in practice, maybe the team didn’t think he’d have the conditioning to give them positive snaps.

But that number will have to turn around in order to have a shot. He is an athlete and, though raw, has a pass rusher’s mentality, and those are two positive traits to be successful on special teams.