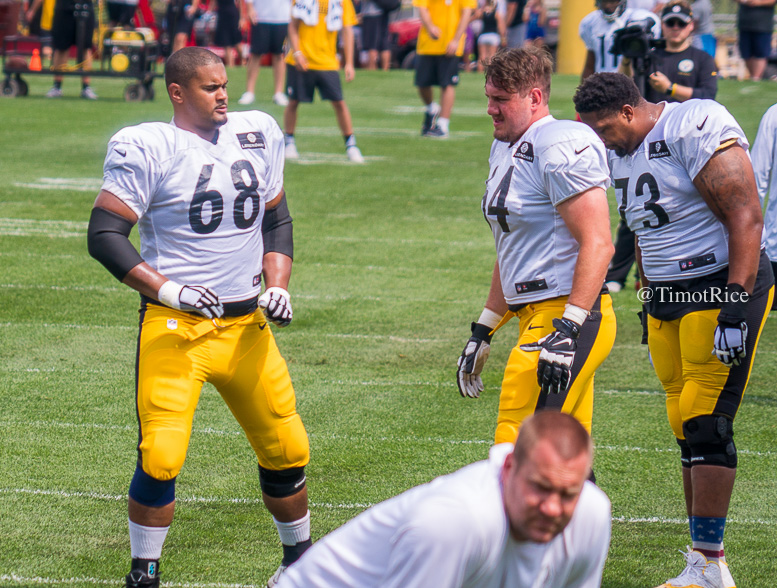 As we did yesterday, we’re breaking down my training camp thoughts on the Pittsburgh Steelers’ offense throughout the first 11 practices. We tackled the skill positions yesterday and today, we turn our attention to the team’s offensive line.

Alejandro Villanueva: He’s been steady, which is what you look for in someone making the jump from their first to second season. At the beginning of camp, guys were ripping and getting under him, taking advantage of his 6’9 frame, but he’s been better at defending it in recent practices. He moves as well as you can hope for a player of his size. I want to get a better feel for his run blocking in the preseason.

There’s been a daily rotation but he hasn’t done anything to suggest to me he is going to lose the starting left tackle gig.

Marcus Gilbert: He’s in tremendous shape, as cut and ripped as any offensive linemen in the league. You could nearly mistake him for a tight end. Arthur Moats has gotten after him throughout camp but the pendulum has swung both sides with Gilbert definitely beating up on him, too.

One thing I did notice on Gilbert. Maybe I just missed it before or maybe it’s something he has improved. But his initial punch in his pass set is really powerful. Knocks pass rushers off balance. Any extra time they need to recover and reset is an advantage for him.

Ryan Harris: It’s been an ok camp for Harris but he’s had some bad days and poor reps where he’s been schooled. Like I noted, he’s been flipping each day with Villanueva between first and second team left tackle and I don’t think he’s actually taken a rep along the right side yet though if there were ever an injury, I’d expect Harris to be the first man up in that spot.

Villanueva was the incumbent and I don’t think Harris has done anything compelling enough to warrant changing the status quo. Should be be a reserve, he’ll function as a swing tackle. It’s the ideal situation.

Jerald Hawkins: Hawkins has been impressive. In a way, that’s surprised me but in a way, it doesn’t. I tried to go in this season with truly a clean slate because his 2015 tape was marred by a preseason ankle injury.  Couple that with a position change, flipping to left tackle, and his junior year wasn’t an accurate representation of what kind of player he could be.

Fully healthy now, it’s largely been positive. I don’t have a great gauge if he has “left” or “right” tackle feet – nor am I really convinced it matters – but his lateral movement is not a hindrance, even if it may not be his #1 strength. The rookie plays with a nasty deposition and looks to finish his blocks in both phases. He gets a good push in the run game and uses his length to seal the edge when he does get beat initially.

He will double-over in pass pro and he may be having some problems firing off the ball in time, leading him vulnerable to giving up the edge. But for a rookie, and a guy who is supposed to be a senior at LSU, it’s a nice start.

Brian Mihalik: If you watched him play in every practice, you wouldn’t guess he is barely eight months into transitioning to offensive tackle from defensive end. He’s built similarly to Villanueva, 6’9 320, and doesn’t seem weak in any one area. Every type of rush will still give him trouble, a little slow to seal the edge, a little easy to get into his chest because of all the surface area, but none of it is horrible or hamstringing his ability to play.

Carrying over what he did in the spring, he’s played left and right tackle in camp and looks apt at both. His size and relatively rapid progression make him an interesting practice squad candidate and it seems likely he will end up there.

Ramon Foster: His battles with Cam Heyward have been fun and Foster has won the majority of them. He’s gotten a little bit of rest as the veteran in the room but hasn’t shown any decline in his age 30 season. Nothing to complain about.

David DeCastro: We talk about iron sharpening iron and it’s usually reserved for the skill guys. Antonio Brown vs Artie Burns, Le’Veon Bell vs Ryan Shazier, you get the idea. But it works the same for the trench guys and there’s no better example than DeCastro and Stephon Tuitt, who have some of the best showdowns in training camp.

That aside, DeCastro looks as strong as ever.

Chris Hubbard: He’s often counted out, even by me, but has made the 53 man roster in back-to-back seasons. And what he’s shown in training camp this season indicates he’ll make the team for that third straight season.

In just 11 practices, he has played all five offensive line spots in team drills. Injuries have forced Hubbard into his tackle spots but he’s been the first man up. That’s versatility no one on this roster can match.

Even beyond simply where he is lining up, his actual play has been sound. He has one of the highest win percentages in one-on-ones and he knows how to leverage his opponent, even if he’s usually at a strength disadvantage. His overall game still isn’t that impressive, average strength and athleticism, but he isn’t terrible in any area and again, that versatility comes in huge as a backup on game day. The Steelers haven’t had someone like that since Trai Essex.

B.J. Finney: We’ve talked up Hubbard but Finney isn’t backing down without a fight. First things first, Finney looks to be in much better shape than last year. Conditioning was an issue but he’s taken every rep, including days where he’s moving all over the place.

His actual play has been “above the line,” to steal the Tomlin catchphrase. He’s a squatty build, the Pillsbury Dough Boy in cleats, but his lower body strength and leverage allows him to absorb bull rushes. He’s dealt with Daniel McCullers as well as anyone has in one-on-ones. He’s seen extensive time at all three interior spots but as noted, hasn’t taken a rep on the outside, unlike Hubbard. And I don’t expect that to change. If the Steelers keep nine linemen, Finney could get squeezed out of that final spot.

Matt Feiler: Running as third team guard, it’s been a fairly quiet camp. Nothing horrible but I don’t have much to talk about either. Based on our charts, he was an even .500 in OL/DL. There’s some size, strength, and a tiny bit of athletic, but nothing that makes you stamp your feet and think he’s going to make the practice squad.

Cole Manhart: Manhart has actually done well in our charting, going 5-1-1, though obviously, his competition hasn’t exactly been Heyward. He, like Feiler, has only played one spot, left guard, and a lack of versatility hurts his value. He has good-enough size but there isn’t a ton that excites me.

Maurkice Pouncey: Wednesday was the first day off he’s been given and though he’s been managed a little bit, he’s basically been given the all-clear in camp. His athleticism is back in what looks like full force, still pulling and being used as a lead blocker downfield.

And before every practice, he unleashes his inner quarterback, competing with Ben Roethlisberger to see who can hit the field goal’s crossbar from the farthest out.

Cody Wallace: If he was a UDFA, I don’t think he’d even make it past the cutdown to 75. It’s been a rough camp for Wallace, who has looked silly against Javon Hargrave in one-on-ones. It wasn’t until the Detroit Lions’ came to town that Wallace had his first clean win in OL/DL.

But also realize that 11 practices don’t overshadow what he’s done in the league. That resume isn’t spectacular either but the main idea is that Wallace isn’t in fear of losing his job unless, and this is still a big if, his preseason snaps look just as bad. After all, a limited athlete like Wallace is going to struggle defending a lot of space. In game, at center, you have a lot more help.

Wallace has also gotten work at both guard spots to prep him there since he’ll be sliding into a backup role.

Valerian Ume-Ezeoke: The most recent addition to the room, he’s surprised me. Not drop my jaw to the floor but more impressive than what I was expecting which, admittedly, wasn’t a lot. This dude is small, 6’2, but he’s nasty. Lot of fight in him, including throwing down Caraun Reid in the first joint practice Tuesday. He’s even done relatively well against McCullers, no small feat.

He’s played center and guard. If, hypothetically, Finney makes the 53 over Hubbard, the door is open for the team to keep an interior player on the practice squad.