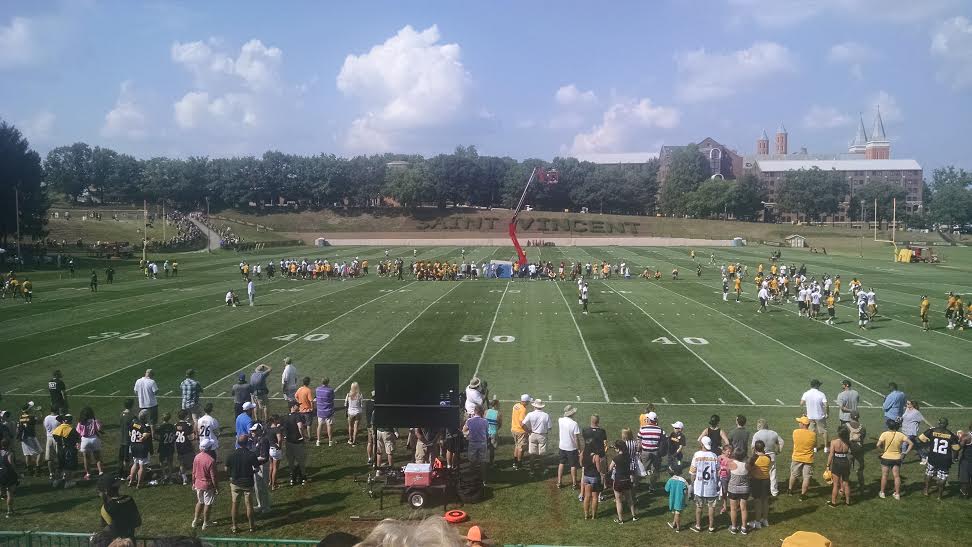 After Thursday’s closed training camp practice at Saint Vincent College in Latrobe ends, the Pittsburgh Steelers will have just four sessions remaining at the place they’ve called their summer home for the last 51 years. And once training camp breaks next Wednesday, the team will then move their preparations for the upcoming 2016 season back to their practice facility Pittsburgh.

During his Wednesday press conference ahead of the team’s second and final joint training camp practice against the Detroit Lions, Steelers head coach Mike Tomlin was asked if there’s anything his team will lose by not finishing their preparations for the regular season at the liberal arts college located about 40 miles southeast of Pittsburgh.

“I don’t know that there’s anything that’s formally unavailable once we leave this setting, but there’s some informal moments that make training camp valuable and that’s why you come to settings such as this,” said Tomlin. “Just those informal moments when you’re sitting outside at 10:30 at night and the day is done, and guys are sitting on the stoop talking about ball, or talking about life issues, helping one another.

While being shacked up in college dorm rooms for three weeks probably isn’t what the Steelers players look forward to the most during training camp, the other experiences provided by picturesque setting at Saint Vincent College probably can’t be matched around the NFL when it comes to training camp locations.

As Tomlin says, the informal moments at training camp are likely priceless and especially when it comes to building team unity between veterans and rookies alike. The annual trek to Latrobe also allows the Steelers fan base to interact intimately with the players and vice versa. It’s pure, it’s healthy and pretty much unmatched, and any of you reading this who have experienced it as either fans or players will probably agree with me.

So, is three weeks at Saint Vincent College enough in Tomlin’s opinion?

“Man, personally I could work out of Latrobe all year, but I don’t know that anybody else would join me in that.”

I bet the fans would, Mike, and maybe a few players as well.