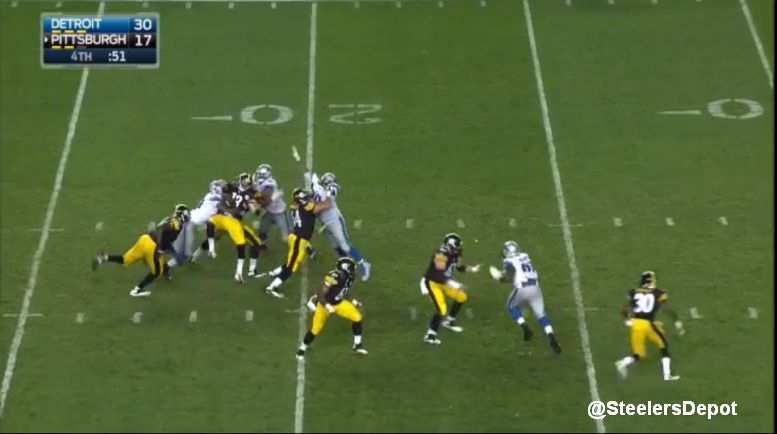 Football is back. And with it comes our usual collection of game recap articles. While it’s obviously good news if we don’t have to do this but we’ll break down the sacks given up by the Pittsburgh Steelers in their loss to the Detroit Lions. There were four of them on the docket this week.

Pretty simple explanation here. Left tackle Alejandro Villanueva oversets too far wide, trying to combat the wide tech of the RDE, but it unable to recover when the end counters inside. It’s hard to fault the initial set, short set and we’re yelling at him for getting beat around the edge, but Villanueva fails to take a power step (flat aggressive step with the inside post foot) to cut off the rusher’s path). 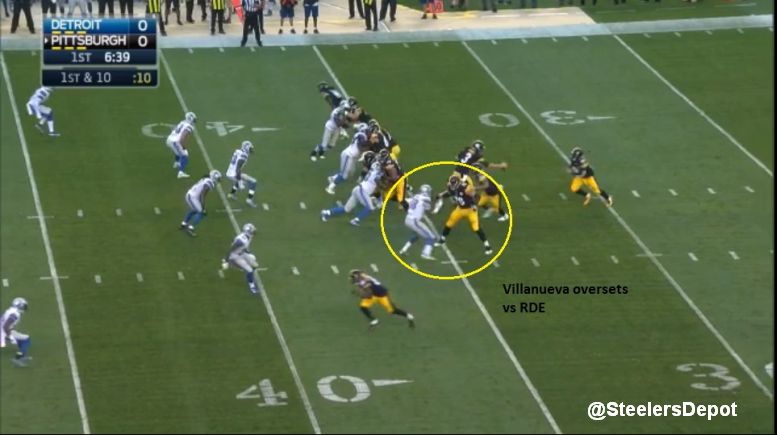 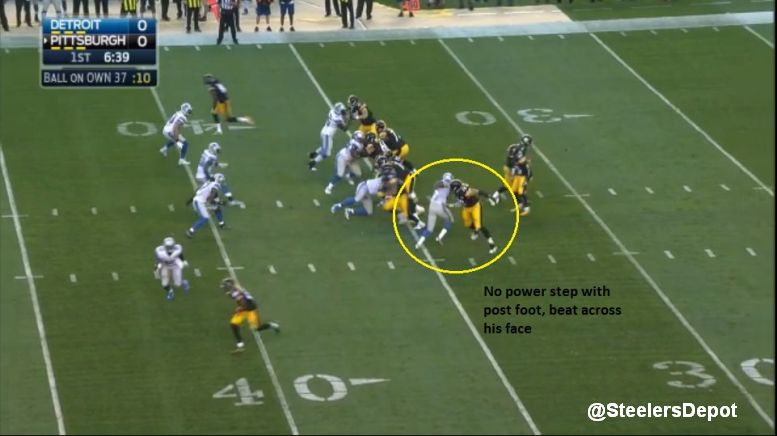 Sure, you can say something about Daryl Richardson just releasing but he has no chance against an end twice his size.

And because the Lions run a 4-3 front, the guard isn’t going to be able to give help as often like he would against an odd front. Ramon Foster was occupied by the one tech, the RDT, and Villanueva may have forgotten he didn’t have the help he usually did in practice against standard rushes.

Let’s take a look at the pre-snap look. 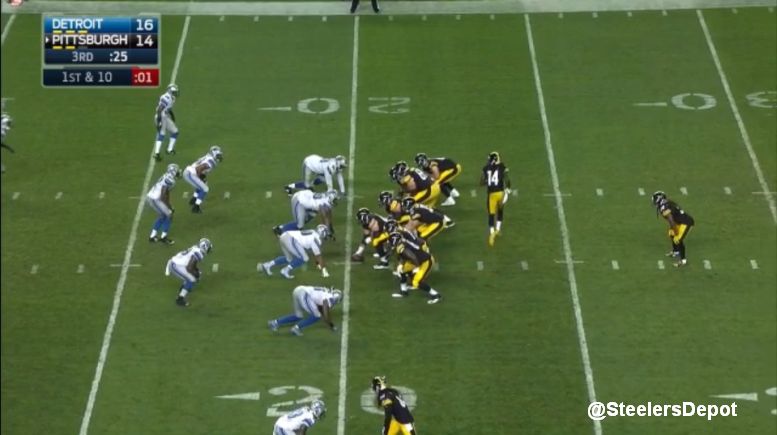 I’m going to take a stab and give my best guess on the protection. It’s half slide protection with the center turning to his left. And so we get a “triangle” read with the center, left guard, and left tackle responsible for the RDE, RDT, and WILL linebacker. 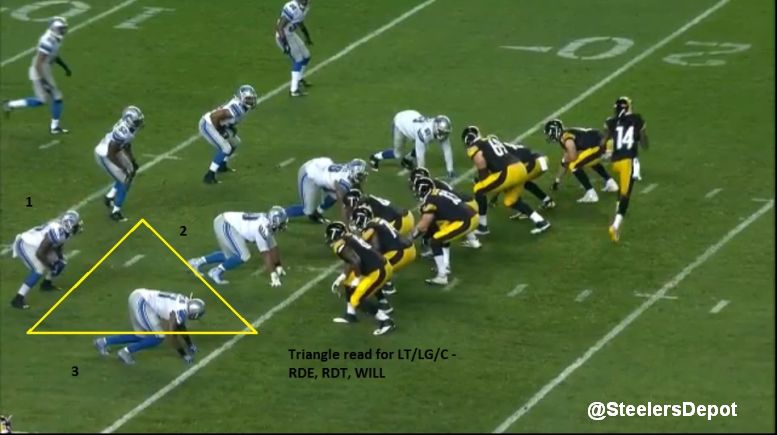 To the man side, away from center, the right guard and right tackle are responsible for the LDT and LDE. The back, Richardson, has a “dual read” on the MIKE to SAM, picking up either one of them (the inside threat). If both rush, it’s up to the quarterback knows he isn’t “safe,” there are more rushing than available to block, and the ball must come out hot.

If we assume that’s the protection, we can break this down pretty quickly.

The WILL linebacker rushes, meaning the half-slide is responsible for it. The linebacker rushes down a gap into the A gap, meaning center B.J. Finney has to slide and pick him up. But he has to wait for the left guard to engage the RDT, allowing him to work off and pick the WILL up. 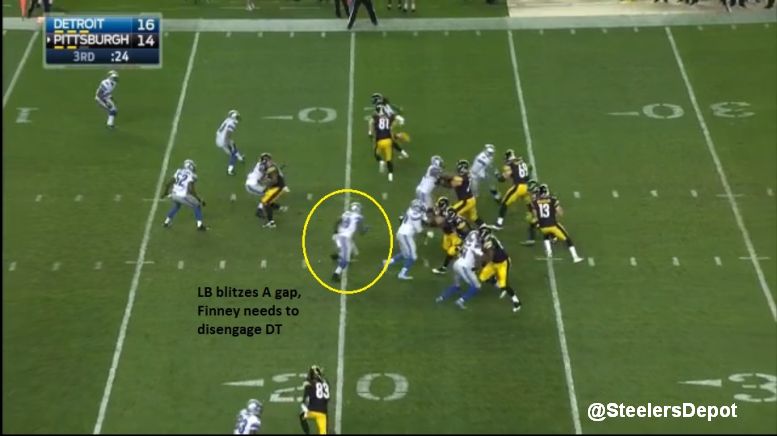 Chris Hubbard, however, is never engaged with the DT, looking to help the left tackle with the RDE. It leaves Finney in a lose-lose and the linebacker rushing in free for the sack. 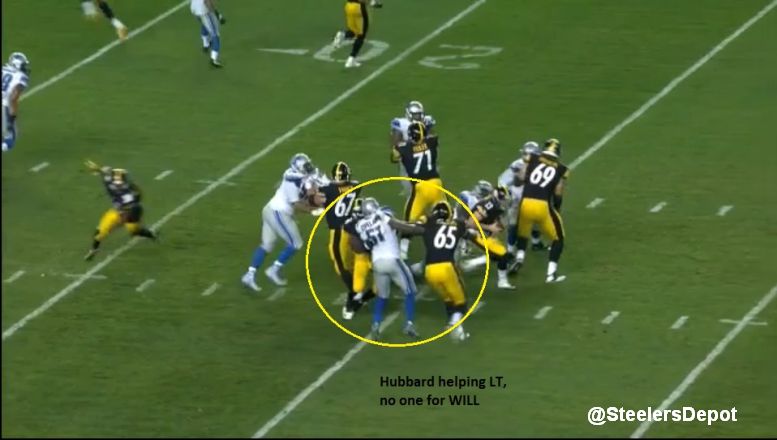 So I’m going to give the blame here to Hubbard, and if I’m wrong, hit me up Hubbard, for not seeing the blitz and sliding down so the center could disengage. Can’t double-team when all three guys in the triangle come.

I want to circle back to one oft-overlooked element at play, too. The Steelers broke the huddle late, not even set at the line with ten seconds left on the playclock. Dustin Vaughan is trying to motion Sammie Coates across the formation with under five seconds and he isn’t even set as it ticks down to the final second. 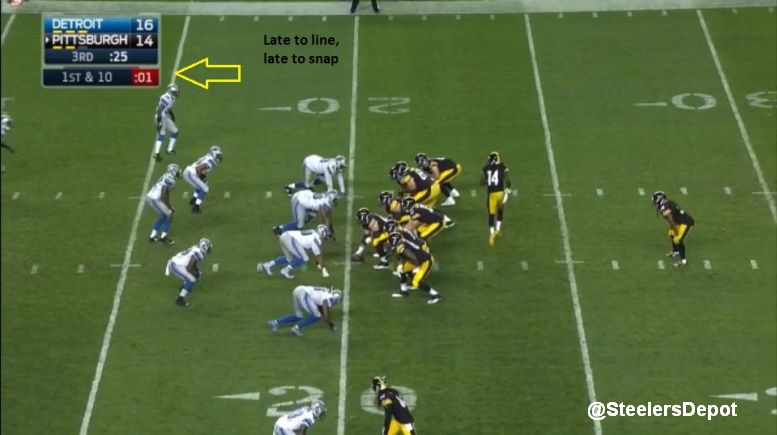 I’m not positive what the issue was here, someone getting in to the huddle late, trouble hearing and communicating the call, or just a general lack or urgency, but I want to put some of the blame on the QB for the late snap. When you’re at one second, the rushers can time the snap count.

3. 4:34 4th, 3rd and 18 – 11 personnel. Four man rush with five blocking, plus the tight end on a block/release. LDE/LDT run a twist. Right guard Valerian Ume-Ezeoke sees it and picks up the crashing LDE. But Hubbard never disengages the looper even with Ume-Ezeoke catching the crasher. 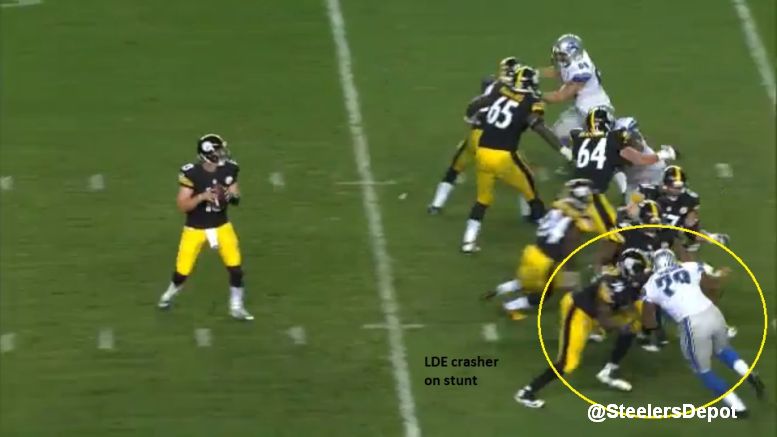 It allows the looper a free path to the quarterback and a sack. 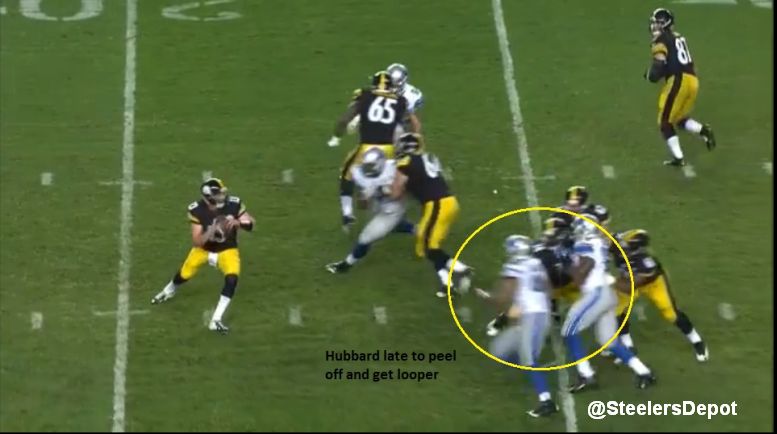 Stunts were an issue for the Steelers during the joint practice and it’s an issue again here, especially with a relatively green Hubbard in at right tackle.

4. :54 4th, 2nd and 12 – 11 personnel, four rush versus five block + running back check/release. Another pretty easy breakdown here and unfortunately, it goes on Hubbard again. Hubbard doesn’t get much width on his slide and lunges on his punch, doubling over with his head down. The LDE easily dips under him and there’s nothing Hubbard can do to stop him. 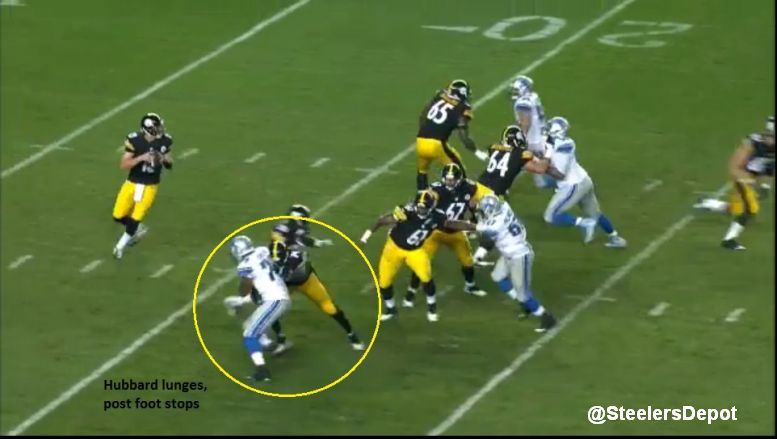 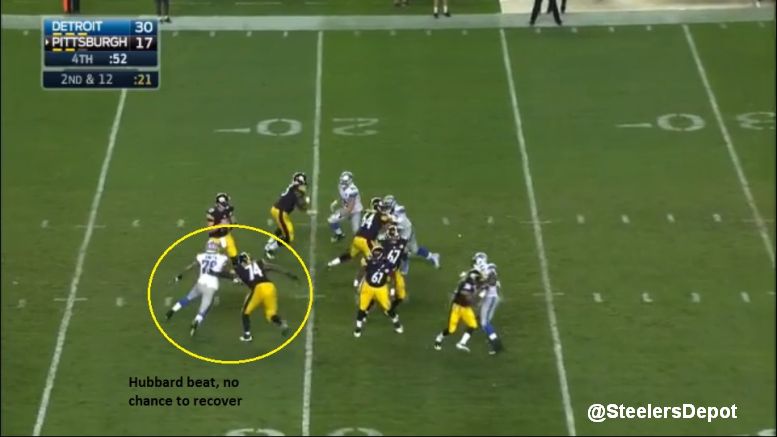 This, uh, isn’t a position you want your quarterback to be in.