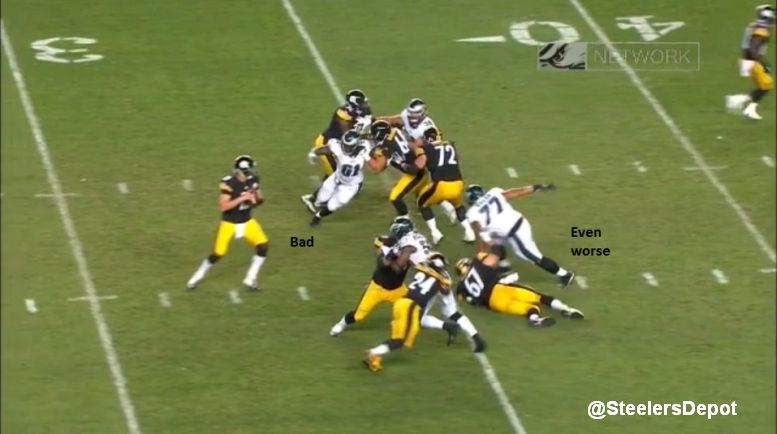 Back to breakdown the quartet of sacks the Pittsburgh Steelers gave up in their loss to the Philadelphia Eagles.

Attempted screen left to Daryl Richardson but the pressure is too immediate and Dustin Vaughan goes down. Chris Hubbard kept his eyes inside and looked to the RDE too late, letting him dip past. 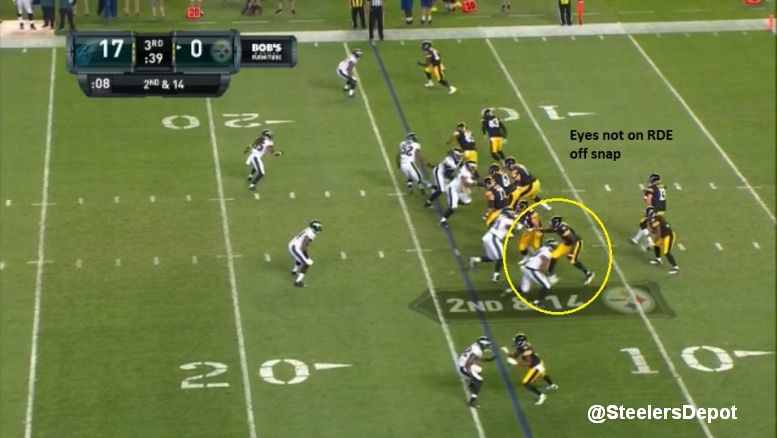 But Hubbard does neither and by the time he works to the end, he’s a couple steps ahead and easily dips past. 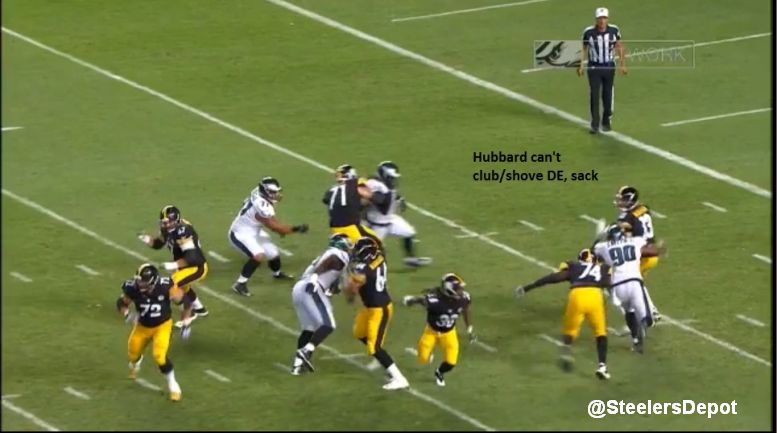 And down goes Vaughan. Too bad too because there could have been some serious yards gained on this play. 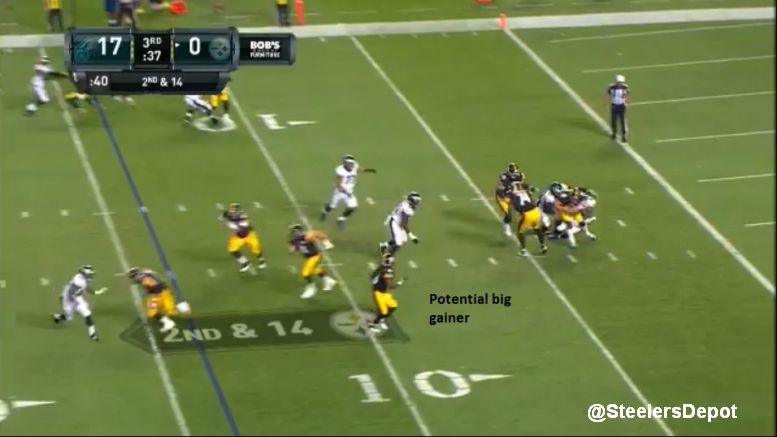 And your GIF of it.

Coupe of issues here. Cole Manhart is unable to slide and stay in front of the DT ripping underneath him. 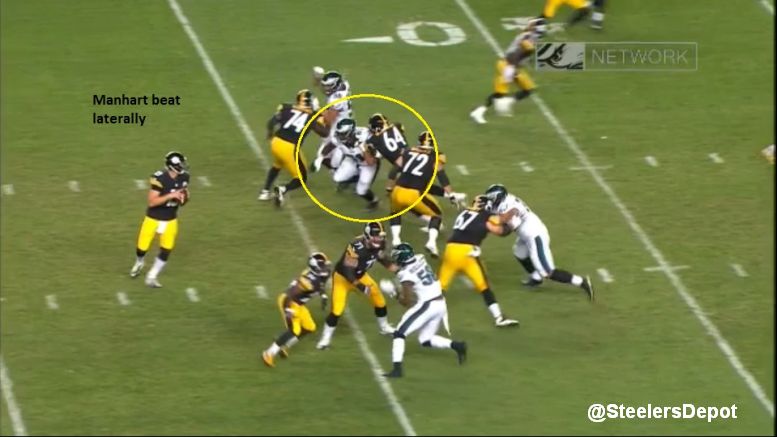 B.J. Finney also has some problems. His punch might be a little early and the defender is able to attack his chest. The punch knocks his inside foot off the ground, distributing all the weight on his outer foot, and softening up Finney’s inside shoulder. Unable to take a flat, inside power step. 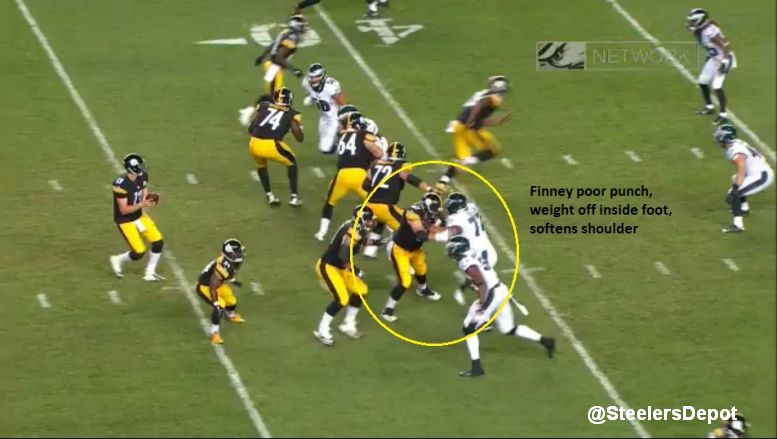 The defender runs through him and has an interior lane to the quarterback, the last thing you want to give up as an offensive linemen. 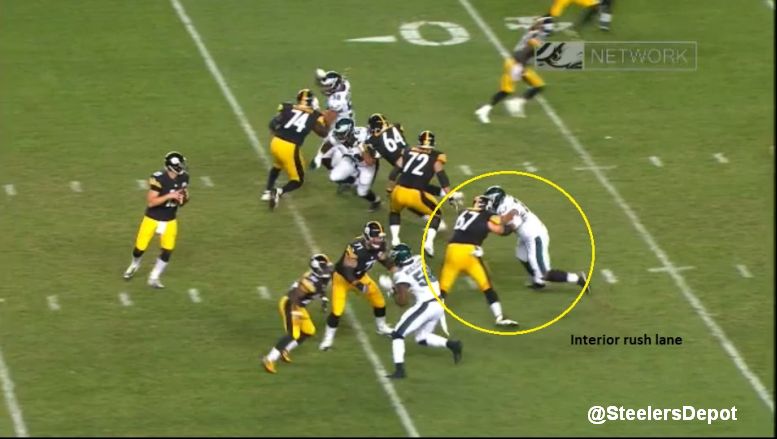 Both guards at fault here.

Looks like right tackle Matt Feiler opens the gate too early instead of meeting the end at an angle. His punch is late and the RDE bull rushes him, getting into his pads and walking him back. No longer in control, Feiler can’t do much and the end is able to shed him. 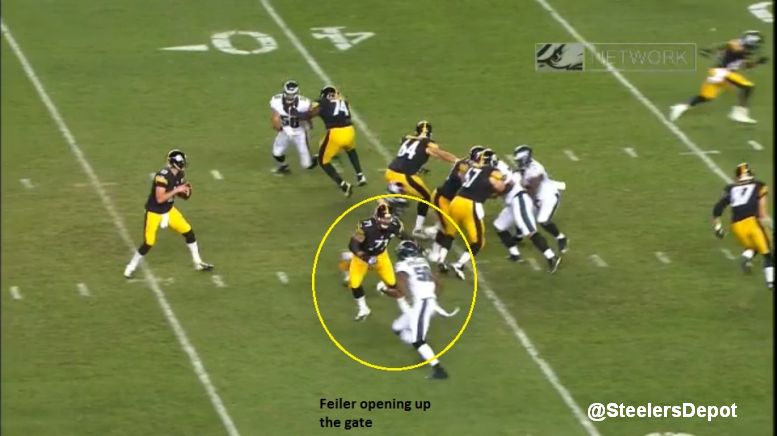 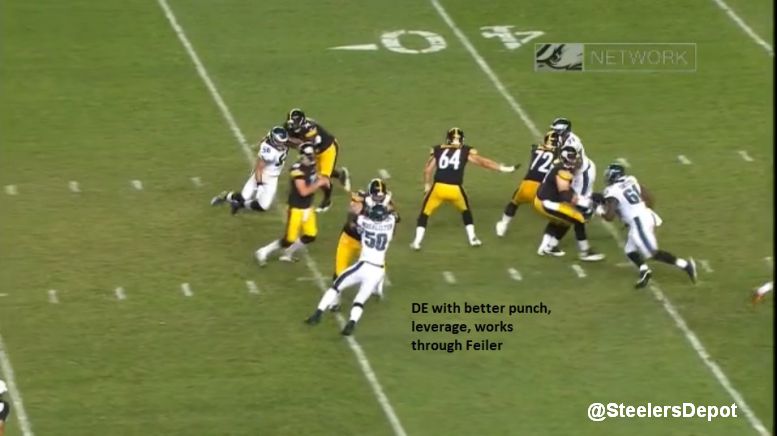 That creates the initial pressure, forcing Vaughan to climb. Finney does have problems seeing this stunt and picking it up but it’s the pressure Feiler allowed that makes Vaughan have to keep climbing and letting the other defenders have an easy path.

Vaughan was looking to hit Brandon Brown-Dukes on his checkdown but with defenders to his right side, and Vaughan a right-handed quarterback, it was too risky to try and wind up. 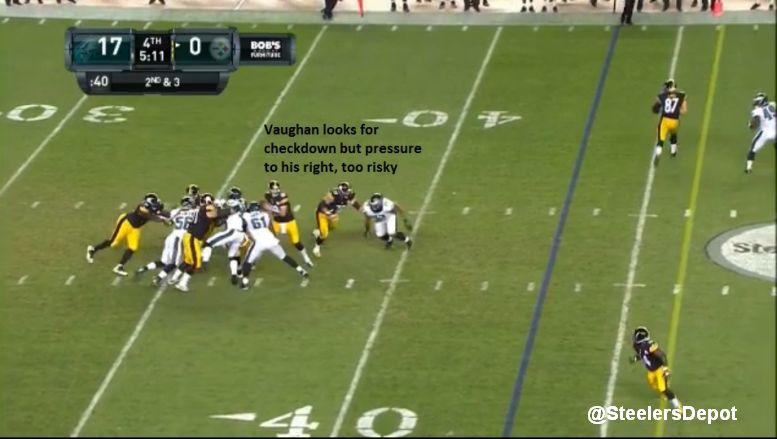 Whew. This one seems to have a lot of components to it. You can really assign blame to a pair of areas. The receivers, and the quarterback. Let’s break each down.

Receivers: The Steelers are basically running a split dig concept with Issac Blakeney running a deep dig and Demarcus Ayers running vertically, stemming his route into a post because of the two-deep shell the Eagles’ present (MOF open = post). 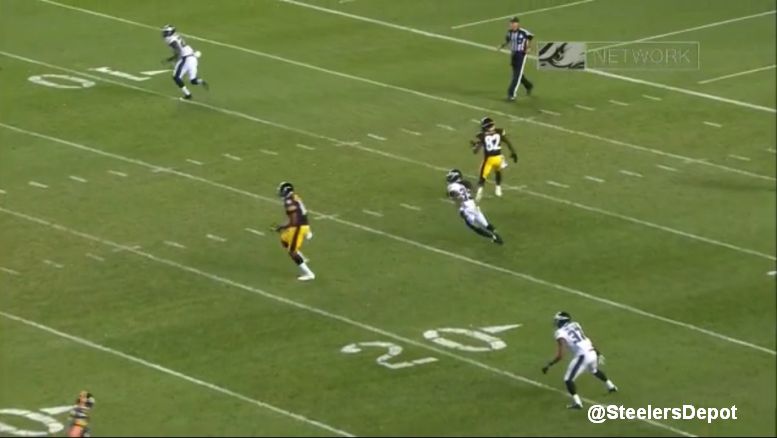 Ayers is fine and though Blakeney is slowing down on his dig, he’s drifting towards the far side linebacker. I’d prefer him to sit down, square up, and work towards the football on any throw. Those extra steps towards the next defender, the next zone of the defense, may have made Vaughan hesitant. 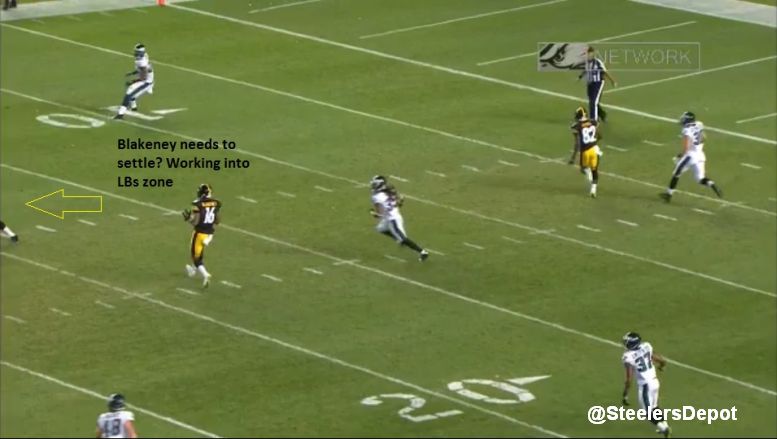 The other issue stems from the back, Brown-Dukes. He has to make himself a checkdown option much quicker. He attempts to shove the defensive end before releasing into his pattern but Paul Lang has already down that off the line of scrimmage, and a pretty good chip I might add. The end is already well inside and taken care of. Brown-Dukes winds up chasing it. I appreciate the attention of detail and doing what you’re generally coached but on the fly, in this specific play, there’s no need to find the end. 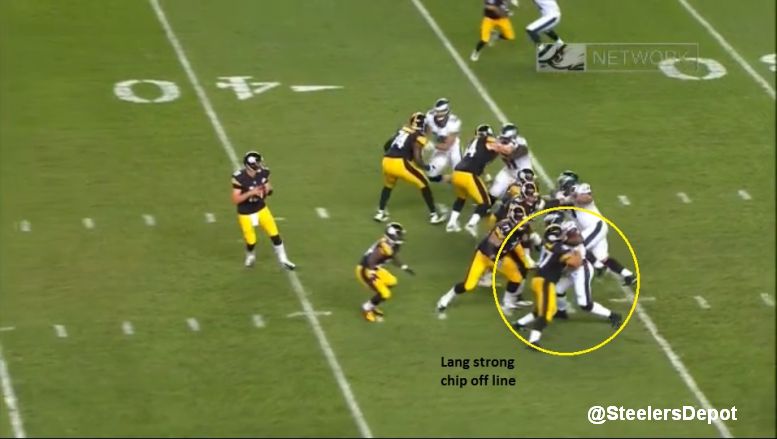 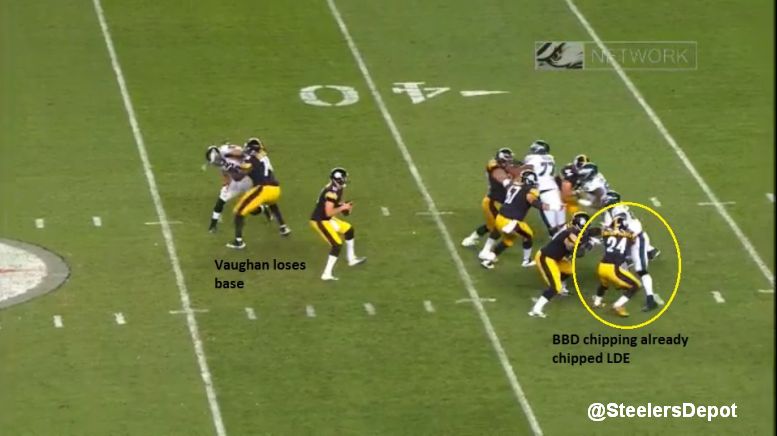 Quarterback: Vaughan has about 3.9 seconds from snap to sack. A lifetime in the league. Though his receivers didn’t do the best job here, Vaughan has to rip this throw. Ayers might have a chance on the post. You could still argue that a strong throw can get to Blakeney before the linebacker can. Vaughan has an arm, he’s gotta make a quick decision and fling a pass into an uncomfortable window. It isn’t reckless, it’s the NFL.

He seemed to feel some pressure, maybe a byproduct of getting sacked three times already, and dips his shoulder and momentarily loses his base, forcing him to reset (as shown in the above picture) He doesn’t pay much attention to anything underneath, just the split-dig and fails to peel the trigger. This is 2nd and 3 and even though time is limited, the checkdown is the profitable throw. Better than a sack. 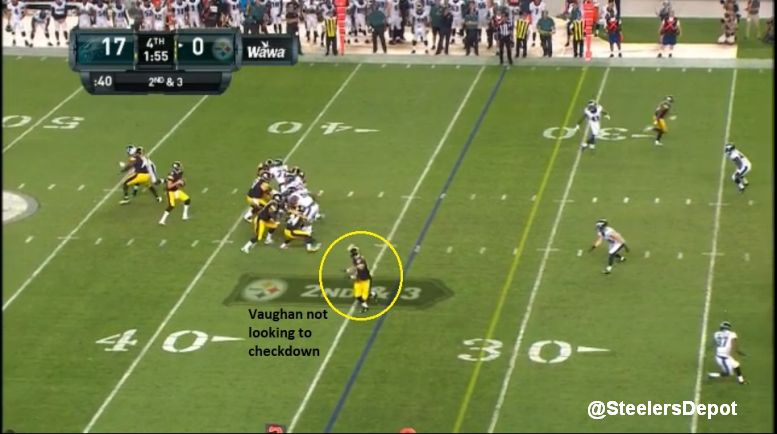 And so down he goes, probably the play where he fractured his right thumb.