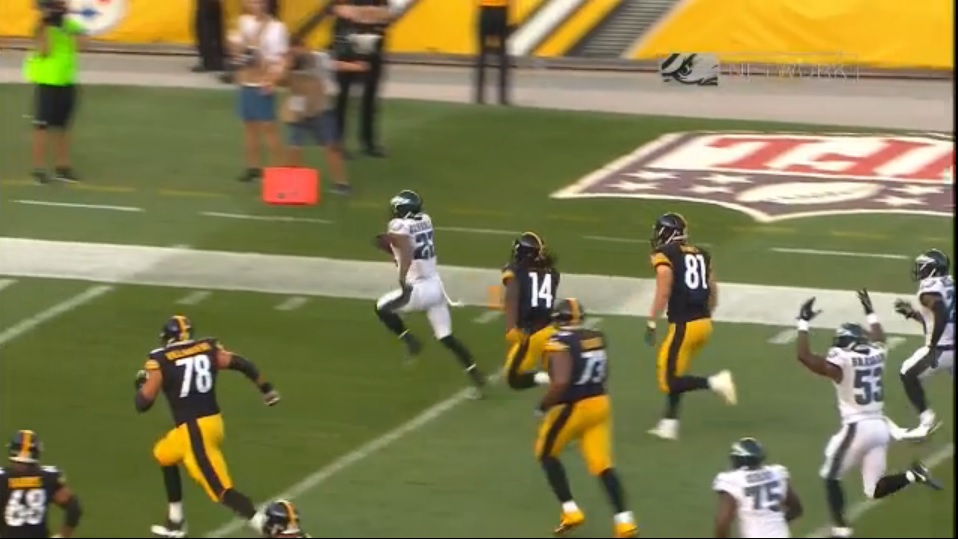 The Pittsburgh Steelers struggled in their second preseason game of the season, this time against the Philadelphia Eagles, Thursday, at Heinz Field.

Although the Eagles 17-0 shut out the Steelers, dropping their preseason record to 0-2, there were a handful of bright spots that emerged for Pittsburgh in the loss.

On the stat sheet Landry Jones’ four interceptions — two of which came in the end zone, is very, very ugly for the fourth-year quarterback.

But outside of a few poor throws, Jones was solid directing the offense up and down the field in the first half making some strong throws while reading the defense and showing composure and the ability to forget the previous play.

That came in handy with the four picks, because Jones continued to come right back up to the line and let it rip into tight windows. Although this was an ugly game for him due to the four picks and just 111 yards passing on 12-of-20 throwing, Jones is fully entrenched as the No. 2 QB behind Ben Roethlisberger.

Coming on for Jones in the second half, Dustin Vaughan didn’t do much more for Pittsburgh than he did the previous week. The second-year QB completed just over 50 percent of his passes (7-for-13) for 67 yards and was sacked four times.

You have to feel for the young signal caller considering what offensive line he’s been put behind the last two weeks, but he hasn’t really shown any improvement as a decision maker or passer.

Fitzgerald Toussaint looked really, really good in the first quarter, rushing for 26 yards on eight carries, including a long of 11 yards, but outside of that he had trouble finding consistent running lanes behind the starting offensive line.

Along with Toussaint, Daryl Richardson really struggled to get back to where he was last week, gaining just 15 yards on 10 carries this week, while also hauling in just one pass for six yards.

Toussaint added two catches for 16 yards, but there wasn’t much to be overly impressed with from the two running backs.

Brandon Brown-Dukes once again saw some action late, rushing the ball twice without gaining a single net yard on the ground, but the rookie from Mercyhurst did haul in one pass for seven yards.

Sammie Coates was once again grossly inconsistent as the feature receiver, running poor routes (including one that led to Nolan Carroll’s pick-six) and taking an unnecessary offensive pass interference call on a mostly-uncatchable ball.

However, Coates really showed some serious flashes once again, including a fantastic top-tapping catching along the Eagles’ sideline late in the second half. Mike Tomlin praised Coates’ play one week after a rough game against the Lions, so don’t give up on the young guy just yet.

Along with Coates, I thought that Eli Rogers was tremendous against the Eagles working out of the slot most of the night and simply torching corners that had no business trying to cover him.  Rogers finished with four catches for 39 yards on five targets before coming out of the game to give backups some reps.

One of those backups that continues to shine is Cobi Hamilton. The former Bengal receiver, who signed with the Steelers August 5, hauled in a team-high four passes for 44 yards on seven targets, tying Rogers for the most catches on the team in the game.

That being said, Hamilton did have Jones’ second interception bounce right off his chest in the end zone, resulting in Malcolm Jenkins’ interception.

Feel-good story Marcus Tucker hauled in two passes for 16 yards in the loss, while Darrius Heyward-Bey hauled in one pass for 12 yards.

The second-year tight end has taken significant strides as a blocker and could be the true No. 1 tight end for this franchise moving forward.

Along with his solid blocking against the Eagles, James hauled in two passes for seven yards, corralling both of his targets on the night. But for Thursday’s game against Philadelphia it was really his blocking that stood out.

From there, the tight end position really took a nose dive.

Xavier Grimble got manhandled at times as a blocker and then added onto his struggles with a dropped pass on an easy throw from Jones in the first half. That’s not going to win you a roster spot at this level.

David Johnson took a false start penalty and didn’t really look as good as he should have as a blocker. There’s obvious concerns here with this unit moving forward.

The starting offensive line looked decent for the most part, opening up the occasional big hole for Toussaint to run through, but the big improvement from last week to Thursday’s game against Philadelphia was the pass protection.

Alejandro Villanueva was much better and appeared to play angry at times, while Maurkice Pouncey saw significant game action for the first time since breaking his leg last preseason against the Green Bay Packers.

The unit that protected Vaughan was an abject disaster. Like I said, you have to feel bad for the guy.

What more is there really to say about this group?

Cam Heyward and Stephon Tuitt look ready to go right now. Tuitt made a great play to start the game for the Steelers against the run and the rest of the first unit seemed to build off of it.

Heyward got a great push at times against Jason Peters, while Big Dan McCullers ate up space inside, allowing Lawrence Timmons and Ryan Shazier to roam freely.

Devaunte Sigler, Lavon Hooks and Johnny Maxey looked good at times too, as Maxey racked up a tackle for loss, while Sigler and Hooks recorded two tackles each.

Arthur Moats recorded the lone sack of the night, but it was on an easy naked bootleg by Sam Bradford that fooled nobody.

Shazier, Timmons and James Harrison didn’t play much and combined for four stops, but it was the backups that really stepped up in a big way.

Rookie Tyler Matakevich brought down the ball carrier six times against the Eagles and really seemed to play much faster this week, while LJ Fort had four tackles and one QB hit of his own.

Steven Johnson added two tackles and appears much more comfortable in the Steelers’ scheme as well, and Vince Williams recorded two tackles of his own.

Rookie Travis Feeney saw action early on against Jason Peters and recorded one tackle, while recently-signed free agent Jermauria Rasco added one tackle of his own.

Philadelphia really had trouble throwing the ball for much of the night, and that was a large testament to how well the secondary played throughout the game.

The Eagles mostly dinked and dunked down the field, but the Steelers did an excellent job of tackling in the secondary.

Kevin White led the team with seven tackles, while Shamarko Thomas added five. The veteran safety looked solid once again, and like I said last week, things seem to be clicking for him.

Montell Garner recorded five tackles of his own and has played his way into a position to make the roster this fall, while Al-Hajj Shabazz added four tackles in the secondary.

Donald Washington struggled at times as a gunner and couldn’t get off the blocks, but in the secondary he put on a decent performance. That being said, it might not be enough to keep him around.

Recently-signed cornerback Julian Whigham saw action in the black and gold, recording two tackles of his own. Keep an eye on him moving forward.

Coates and Rogers looked really good as return men, showcasing their speed and wiggle at times, while Demarcus Ayers didn’t do much with his two punt return opportunities.

In the punting game, it’s safe to say once again that this battle is over. Jordan Berry just continues to destroy the football on punts, averaging a net of 51 yards on his two punts against the Eagles.

Will Monday looked good, averaging just over 44 yards per punt, but it looks almost impossible to unseat Berry at this point.