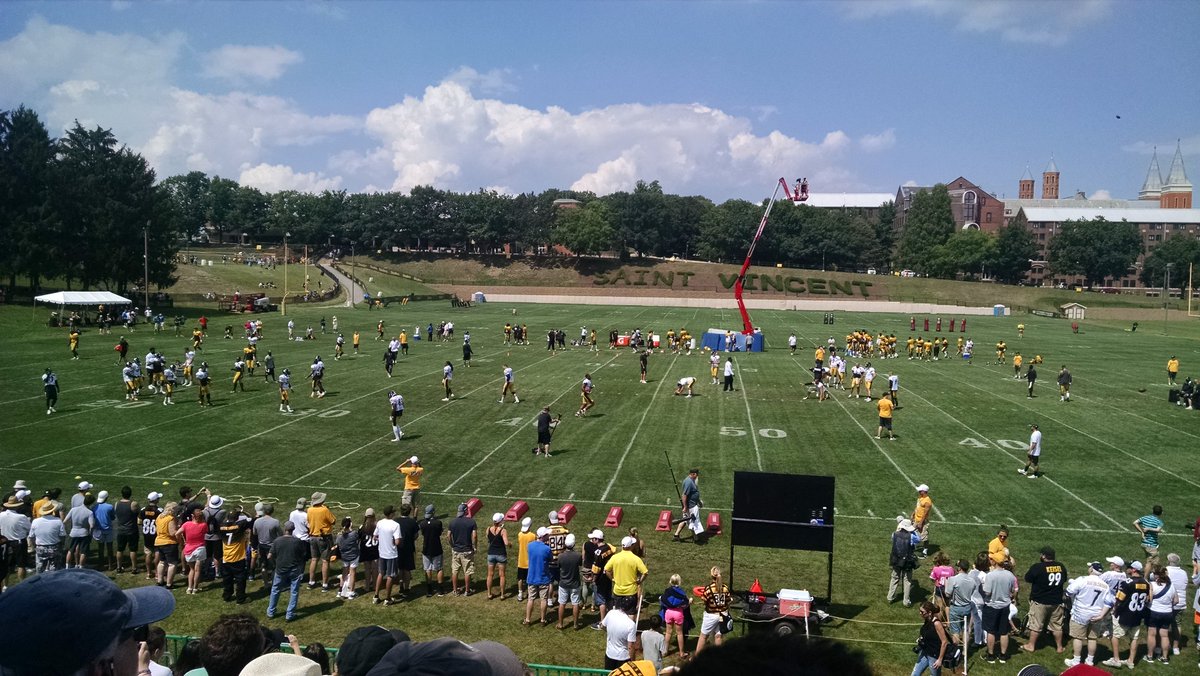 Getting to our post training camp breakdown, wrapping things up with a couple of articles on what went down at St. Vincent College. We’ll start with some of the players who shined and some who struggled. Not listed in any particular order, these are the players who consistently shined. Obviously, there are plenty of other guys who had overall good camps but weren’t quite at this talk-of-the-town level.

WR Eli Rogers – I don’t know what was more impressive. His actual play in camp or the praise heaped on him by the coaching staff on a near-daily basis. Rogers arguably has the second best hands on this team and he’s in a close race for the second best route runner with Markus Wheaton. Everything Rogers catches is quiet, soft hands, and he’s quick to the tuck, getting upfield in a hurry. He can make grabs away from his body and is a nuanced route runner, knowing where to find grass and make himself an open target.

Entering camp as a bubble player, Rogers is a near-lock on this team and even if he doesn’t carve out a role in 2016, he will the following year.

RB Daryl Richardson – After the first preseason game, Richardson finally ran away from the pack as the #3/4 running back. Literally. His acceleration that got him drafted still exists and though he’ll have to show more on special teams, he’s clearly got a ton of talent. His workload in the Detroit Lions game compared to the others indicates how the team values him.

OG/C B.J. Finney – Offensive linemen aren’t the sexiest players to talk about and Finney’s body type isn’t one that’ll rival a pinup girl. But his conditioning is much improved, ending practices as strong as he started. His lower body strength is excellent and he’s able to handle bull rushes without getting run into the pocket or taking hop steps back. Against the Lions, he showed his athleticism to reach block and work in space. He doesn’t have Chris Hubbard’s versatility, and Hubbard had a nice camp too, but Finney may force the Steelers to keep then linemen. I don’t think they want to risk losing him.

NT Javon Hargrave – Wow. That’s all I can say. It’s rare for a draft pick to utterly live up to the billing but Hargrave has…and maybe then some. He dominated in one-on-ones, making basically everyone look silly once or twice, minimum. But what he’s done against the run is just as impressive, able to leverage and hold the point of attack. It was only 15 snaps against Detroit but he graded positively on nearly every single one.

OLB Anthony Chickillo – Though he was a little quiet against the Lions and he bowed out with an ankle injury in the game, he was the talk for a majority of camp. He’s a refined pass rusher who can win the edge with a speed rush or counter inside and dip under. His hand use is active, he stays disengaged, and though he doesn’t have a lot of strength with his bull rush, he’s able to convert speed to power and flashes a one-arm stab capable of walking tackles back.

His run defense has been a pleasant surprise, able to set the edge, while he had a lot of success in coverage during one-on-one sessions.

ILB L.J. Fort – Rookie Tyler Matakevich was the talk before camp, and he certainly impressed, but Fort may be the one walking away from Latrobe with the better chance of making the team. He’s run second-team inside linebacker next to Vince Williams. Fort’s been active against the run, quick to diagnose, while running first team on most of the special teams units.

P Jordan Berry – The sample size is still small but Berry’s been fantastic in camp when he’s been given the chance and his performance against the Lions matched what he did in Latrobe. He seems like a lock to be the Steelers’ starting punter.

TE Xavier Grimble – Grimble had a quick start to camp and flashed his athleticism and ability to adjust for the football. And while his blocking did improve, conditioning was an issue and he ended the last week of camp quietly. It wasn’t all bad but it’s hard not to feel like he left some meat on the bone, especially given the lack of depth at the position.

C Cody Wallace – While it’s been a difficult camp, as I’ve said, it’s not like two weeks of practice overshadow an entire NFL resume. But in a vacuum, if this was a UDFA, he’d be on the first cut list. His win/loss record in one-on-ones was the worst of the group, his lack of athleticism exposed in one-on-ones while he didn’t have the strength to handle Daniel McCullers’ repeated bull rushes.

DE Giorgio Newberry – I’m not trying to pick on a UDFA because it’s not like his chances were great to begin with, but I talked him up before camp and that prediction fell flat on its face. His playtime was scarce and his impact even smaller. He almost seems a lock to get his walking papers at the cutdown to 75.

OLB Bud Dupree – Sure, it was an injury that held him out, not poor play, but for a player circled as one of the key cogs to the Steelers’ defense this year, it’s disappointing we haven’t been able to evaluate much further. You can say the same about a guy like Artie Burns but the Steelers aren’t counting on Burns the way they are Dupree.

His injury doesn’t look that serious, nothing that would jeopardize his Week One availability, but I wish he had a better idea of what type of player we’re getting a year into this thing.

CB Donald Washington – Another guy I hyped and had on my 53 man roster pre-camp. Maybe that’s my fault for expectations that were too high. He’s still getting high priority reps in practice and ended practice with an interception, but seeing him get zero snaps against the Lions is a troubling sign.

He was the only non-injured defensive player to fail to see playing time on defense last week.

Before the interception, his reps in camp weren’t that impressive. I never saw the hops he had coming out of college, contesting 50-50 balls downfield. Ever since the Friday Night practice, getting trucked by Fitzgerald Toussaint, he’s been on a downhill slope.

P Will Monday – Take what I said about Berry and you can write the opposite for Monday. It’s true that Berry has done so well it’s tough to imagine a rookie being able to match but Monday hasn’t helped himself either. His hangtimes haven’t been great and he’s shanked a couple punts, including a low-liner in the preseason game that set Detroit up around the Steelers’ 40.

Granted, Monday was punting out of his own end zone but that was a taste of the high-pressure moments the league brings. And he didn’t respond.