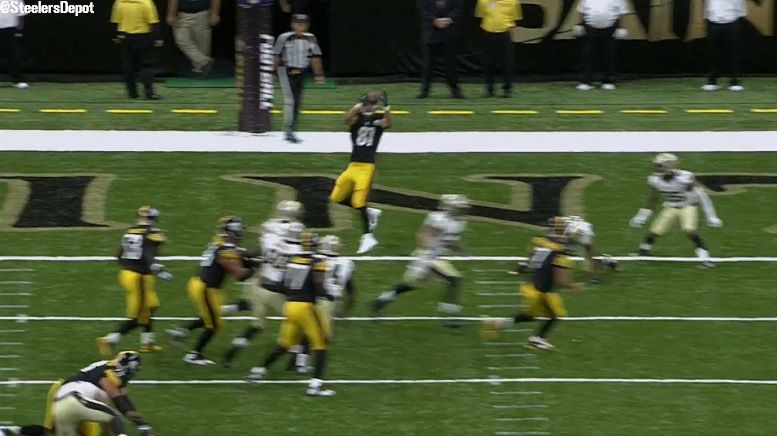 The Pittsburgh Steelers certainly spent a good portion of their ‘dress rehearsal’ preseason game exercising their passing game more so than the running game. 41 offensive plays were designed passes, including one sack and a scramble, while just 23 were intended to be running plays. Long stretches of the game—particularly with the first-team unit—were dominated by the passing game.

And we also saw, again best emphasized with the first-team unit, a heavy distribution of targets and receptions, spreading the ball to any number of targets. In all, 13 different players made at least one reception during the game, and at least 10 of them, perhaps 11, should be expected to be on the opening-day roster.

Setting aside the fact that Le’Veon Bell is going to be suspended to start the season, he led the team with five receptions, but DeAngelo Williams, Fitzgerald Toussaint, and Daryl Richardson were all involved as well. Jesse James, David Johnson, and Xavier Grimble all got multiple touches, the latter with a 22-yard reception on third down.

Antonio Brown, Markus Wheaton, Eli Rogers, Sammie Coates, Darrius Heyward-Bey, and Demarcus Ayers all got a touch as well, and these figure to be all represented on the 53-man roster or the practice squad, in the case of Ayers.

Whether Grimble makes the roster or not is left to be determined, but he made some headway against the Saints in that regard, and Jerald Hawkins being placed on injured reserve also plays into his favor, as does the lingering recovery time for Ladarius Green.

13 different players caught a reception, and, in my opinion, all of them are worthy of a roster spot, though not all are likely or able to be kept. They may all over the course of time find themselves on the 53-man roster, if no this year, then next year.

When Landry Jones entered the game, the trend continued, with his first four targets all going to different players. He hit five different receivers on the touchdown drive that culminated in an eight-yard reception in the back of the end zone by Coates.

What is the point of all this? It is, of course, to emphasize that the Steelers have at their disposal a number of weapons, more even than they can use at one time, and also that they have the right passer—or passers—able to make use of the variety.

The Steelers will begin the season without Bell, and perhaps with Green as well. They will not have Martavis Bryant at all for this season. And yet that does not seem to put much of a dent in their offensive ambitions, such is the bounty of weapons as their disposal.