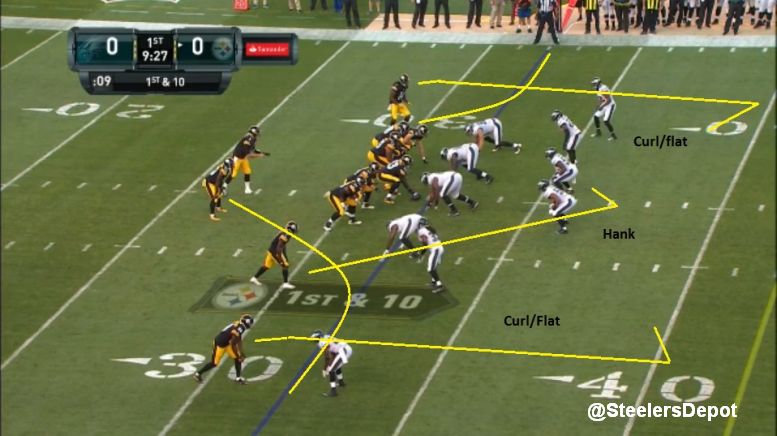 Throw one interception and you’ll earn some jeers from Steelers fans. Throw four? In a half? I think they’re bringing back the Salem Witch Trials. Clearly a less than stellar day from Landry Jones and though several of them were a mixed bag of blame, the first interception – a pick six to Nolan Carroll – was 95% on the quarterback. Let’s break it down.

The route concept is a familiar one, something we’ve broken down before. It’s a Todd Haley staple, his “Hank” concept. Hank is a curl/flat combination mirrored to each side with a tight end or wide receiver sitting down in the middle of the field on a five yard curl, the “hank” part of the route tree.

We just showed this last week on a catch Eli Rogers made last week. If you missed it, let’s again post a picture of Haley’s 82 Hank Glance from the Dallas Cowboys’ playbook when he served as their passing game coordinator from the 2004-2006.

Here’s a drawn up version of the actual playcall from yesterday’s game run out of their 11 personnel. 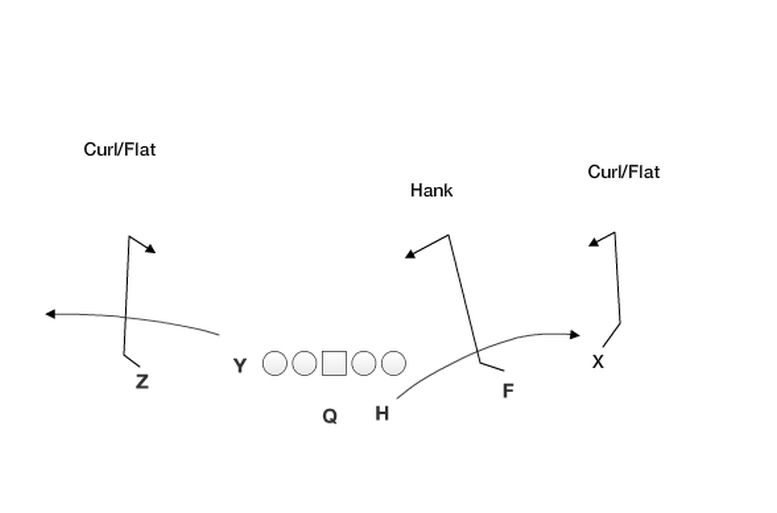 To the left, Sammie Coates and Jesse James run their curl flat while Darrius Heyward-Bey and Fitzgerald Toussaint do the same to the right. Rogers sits down on his Hank concept.

The Eagles show Cover 1/3 with ten men in the picture, a single high safety defending over the top. Jones looks left initially and sees the flat defender, the safety who has rolled down, expand on James to the flat. 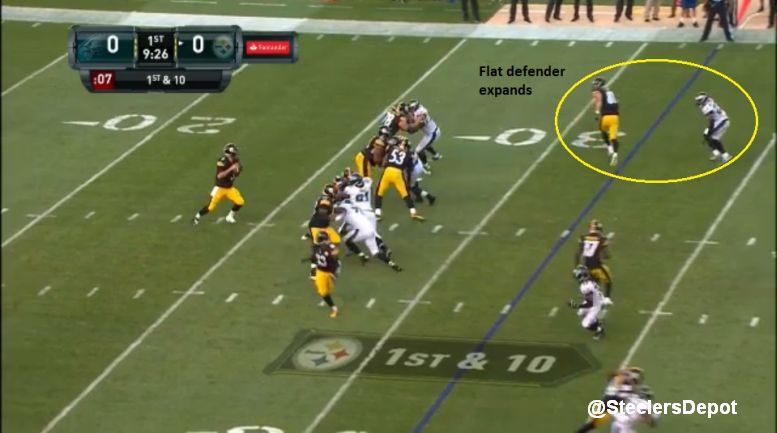 In theory, this would open up the curl to Coates. But with the Eagles rolling up their cornerbacks and playing tight coverage, he isn’t an option. Or at least, shouldn’t be. 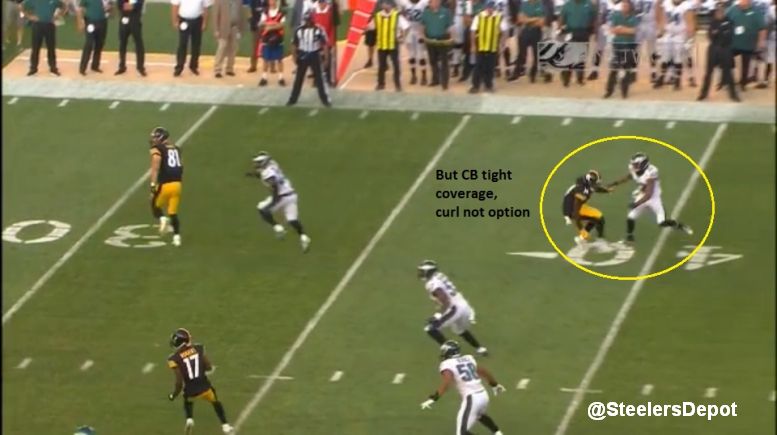 Jones has to come off that read, not just lock in and assume it’ll open up, and work across the field. If he does, he’ll find Toussaint in the flat or, and this is the best decision in hindsight, Rogers on the hank. No throw is going to be a 50 yard gainer, but it’s important for the quarterback to make a profit on every snap, especially on 1st and 10 when you can take five yards and consider it a positive play. 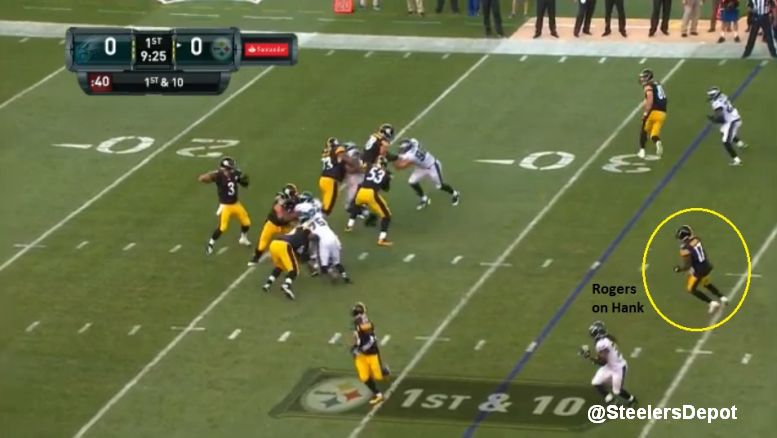 Not only does Jones make the wrong read, his ball placement is off, too. Thrown to the outside shoulder with the CB playing outside leverage. Look at it from the cornerback’s view. Even if you argue Coates needed to sell vertically more forcefully here or work back to the ball, the fact that he doesn’t and the cornerback clearly isn’t fooled should be enough for Jones to look off him.

Bad read, bad decision, bad ball placement. Tough to find any positives from Jones on this play. The only silver lining is his response, leading the Steelers on a long drive immediately after.

Play quarterback enough and you’ll throw a couple of picks. The fact he threw an interception isn’t what eats away at me. It’s how simple of a concept it is, how much of a staple it is in Haley’s offense. It’s something that is probably part of their Day One install, a simple concept for receivers to learn (mirrored routes) and relatively easy reads for the quarterback.

It felt like a very rookie mistake for a guy I know consider a veteran.

I’ll probably be less critical of Jones than most fans, the other interceptions had plenty of context and like it or not, he is this team’s #2 quarterback, but this play was squarely on him. And the start of a very tough night. For himself and fans.