There was a lot of ugly in the Pittsburgh Steelers’ first game but one of the bright spots was third round rookie Javon Hargrave. It wasn’t all perfect, mind you, and we’ll examine both with a final, game-one conclusion below.

1. 10:26 2nd Quarter – One of Hargrave’s first snaps. Dump off to the right side. He winds up being doubled by the center and right guard but immediately, you can see the leverage and power he’s going to be able to generate when he’s left one-on-one.

Just look at how low he’s getting and how much power he’s uncoiling with on his punch. 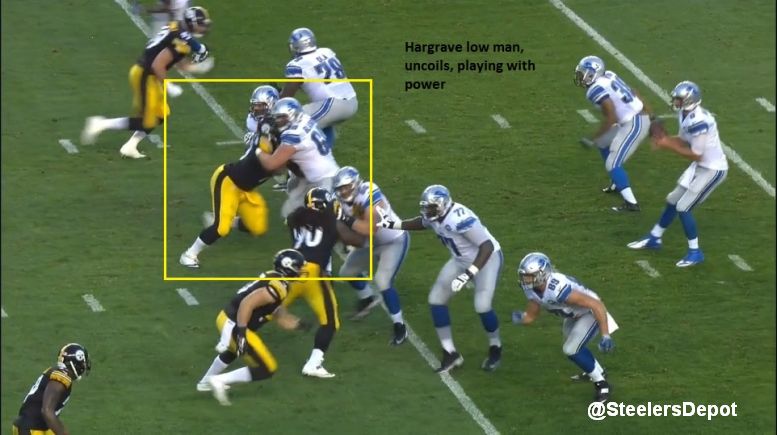 Because of the double-team, he gets knocked off balance a little bit and isn’t able to walk anyone back. But he shows lower leg drive, keeping his feet pumping, and working the whole way.

2. 2:58 2nd – Watch how he’s aligned. He’s titled only this isn’t that “faux 4-3” look the Steelers ran last year, and showed in camp, where the nose tackle kicks down to the three tech and tilts. This is in their base 3-4 with Hargrave playing the one tech, but angled between center and guard. 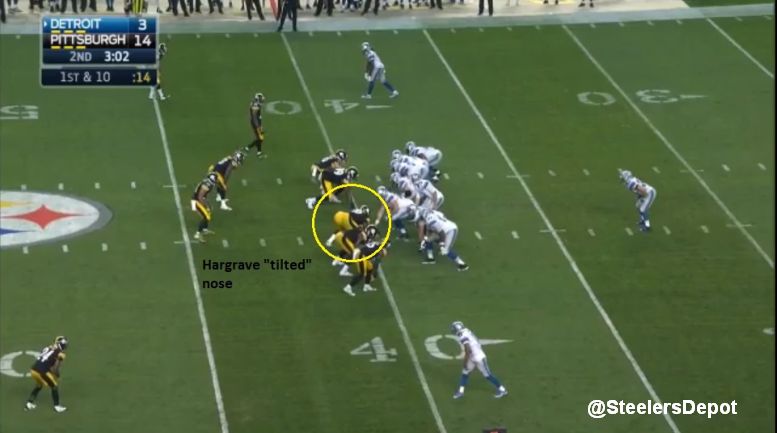 Immediately, you can see they’re playing to his strengths. Allowing him to be aggressive, one-gap, penetrate and get into the backfield.

And again, you can see that wicked good first step, driving the center back off the ball. Had this been a run instead of the smoke screen on this RPO, Hargrave is probably blowing it up. 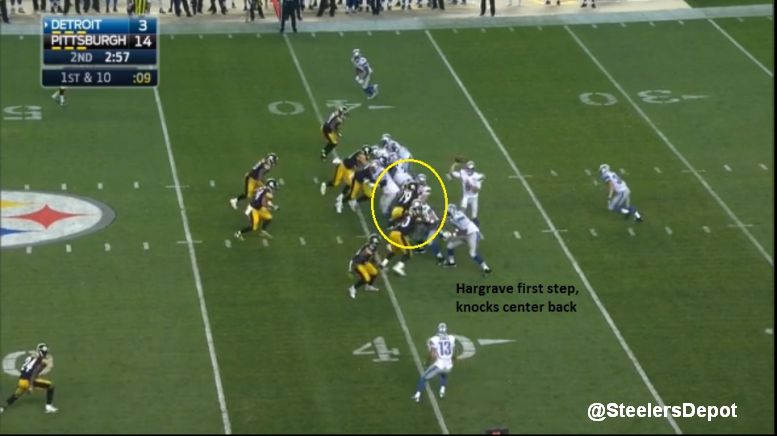 And let’s take a peek in GIF form.

3. :28, 2nd Quarter – I love this play for two reasons. One for physical ability, one for mental.

Physically, you’ll see what Hargrave does. Dips inside the center and up the A gap for the best kind of pressure a defense can generate, forcing the hurried, low throw and the incompletion. Creates a 3rd and long for the defense.

But what I also love, maybe even more, is rush lane integrity. It isn’t a complicated concept. On any rush and blitz, you have to be balanced. Fail to contain your rush or leave huge gaps and you’re going to create escape lanes for the quarterback.

Keith Butler calls a fire zone with Shamarko Thomas blitzing the boundary side B gap. This is basically Butler’s Scar Fire Zone.

And you can see the nose tackle’s resposnbility, to balance the blitz, is to scrape over and rush the opposite A gap.

Hargrave does that and still wins, cleanly I might add. That’s about as well as you can coach it up. Play smart, play fast, play aggressive.

4. 7:41 3rd – We’ve seen a lot of clips of him as a pass rusher. But his run defense is just as important and heck, as a nickel defender, where he’ll often be this year, it might be even more important because it’s a more difficult and just as important role.

Now, this is him as the base nose tackle but still a positive play. It’s a two tight end set to the right and Hargrave controls the strongside A gap. The Lions run away, a weakside iso play, but Hargrave gets under center Gabe Ikard’s pads and controls the line of scrimmage. There’s no way the back could try to cutback even if he wanted to and L.J. Fort maintains his weakside A gap, flying in to make the play (the FB also probably screwed up here).

5. 6:20 4th – Last clip. This again combines Hargrave’s physical and mental ability. There is the simple act of crossing the right guard’s face, dipping his inside shoulder and beating him inside.

But Hargrave read and reacted to how the linemen set and the rookie took advantage.

Pay attention to the right guard. He isn’t square, his inside shoulder turned and now “weak,” with no ability to handle a rush to that side. So Hargrave reacts to it and crosses his fact, winning inside as the guard lunges and has absolutely zero power to defend it. Hargrave wins clean and the center is forced to help. 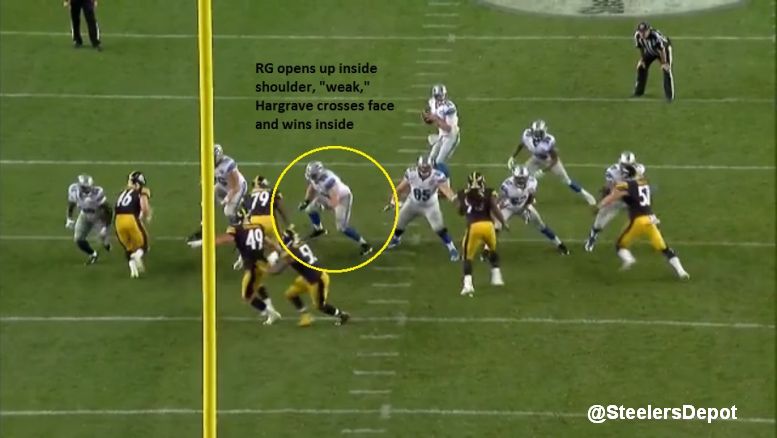 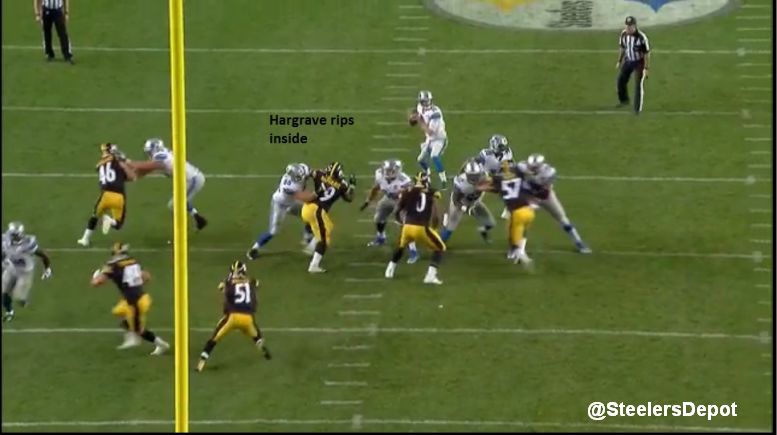 I am a little worried about maintaining that balance in his rush, the one side gets pretty overloaded with Hargrave dipping inside but it’s hard to blame him for taking advantage of terrible technique by the guard.

1. 10:26 2nd – You might remember this as the first play under the “good” category. The leverage was awesome but let’s watch things after the play.

That effort isn’t terrible but I wouldn’t call it “fanatical,” and that’s the benchmark set by Cam Heyward and Stephon Tuitt. Especially for someone who didn’t play a lot of snaps. It’s just a small reminder of the how level of effort you have to play with on every single snap.

And that leads me to my other point, something you can’t show in a play. I am a little surprised, disappointed even, that Hargrave only saw 15 snaps on a day where the Lions controlled the clock. Rarely, and our charting will give us an exact number, was he even asked to play consecutive snaps. So it was tough to test his conditioning though I wonder the fact that he was rotated out so often served as an indication physically, he isn’t quite there yet.

It was an impressive debut for Hargrave and arguably the best of anyone in this rookie class, though his competition wasn’t exactly stiff. The fact they’re “tilting” him in some looks has me really intrigued and his play itself was similar to what we’ve seen in camp. And when those two situations match up positively, it’s hard not to get excited.