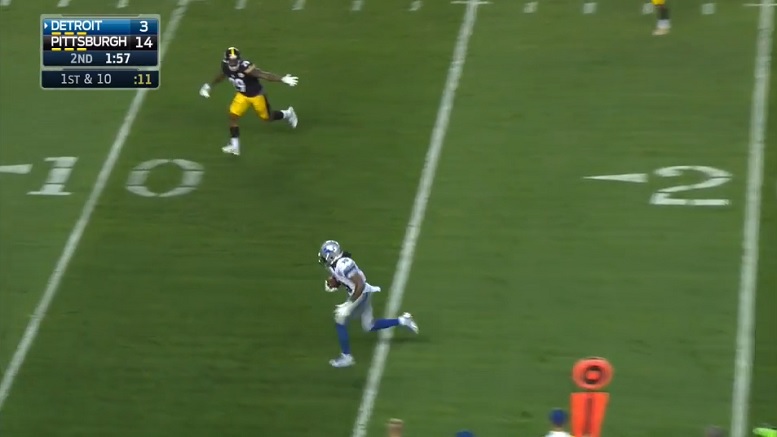 In the Pittsburgh Steelers Friday night preseason loss to the Detroit Lions the team certainly had their share of problems in all three phases of the game and especially on the defensive side of the football as missed tackles and poor communication ruled the evening.

With less than two minutes to go in the first half, Lions quarterback Dan Orlovsky connected with uncovered wide receiver Andre Roberts from 28 yards out for a touchdown. So what exactly went wrong on that play and who blew the coverage?

As you can see below, cornerback Doran Grant blitzed off the right side of the defense. He appropriately wasn’t supposed to, however, as safety Shamarko Thomas told Jacob Klinger of Penn Live after the game that the call was for the defense to be in man-to-man coverage all the way across and they failed to communicate the play to Grant when they noticed he wasn’t playing the right defense before the football was snapped.

“Coaches tell us we got to communicate and that’s the big thing Coach Tomlin’s always talking about,” Thomas said after the game.

As you can see below, this indeed looks like it should be Cover-1 man-to-man with Robert Golden being the lone deep safety on the play. You can see Thomas also get upset down near the goal-line and turn around and hold hope one finger to supposedly Grant.

Miscommunications happen and luckily this happened during a preseason game. Hopefully they will get these calls distributed properly in the near future.